It was a huge year for news at UVic, and the Martlet was right there to cover it. While this is not an extensive review of the year’s events, these are some of the more notable stories that unfolded (and continue to unfold). 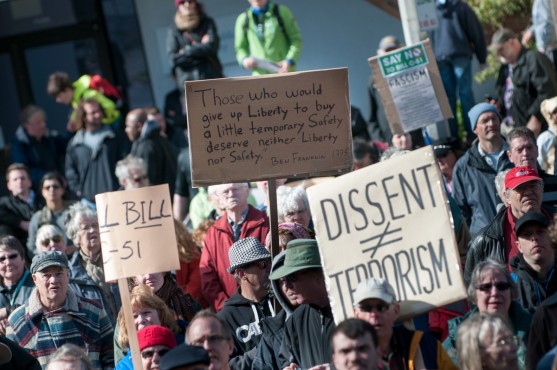 Security was a hot topic last year, with C-51, Syrian refugees, and the Paris attacks stirring the emotions of many Canadians. Photo by Hugo Wong

2015 was a unique year in federal politics for many reasons, one of them being the emphasis on Canadian citizens’ privacy and security in the wake of the 2014 Parliament shootings, the rise of ISIS, and ever-growing fears of domestic terrorism. In response to these concerns, the Conservatives drafted Bill C-51, a bill that would “ostensibly enable Canadian law enforcement to better address terrorist activities conducted by or against Canadian citizens.”

The bill was not without its problems, however, and on Mar. 14, concerned citizens hit downtown Victoria in droves to protest the bill before its inevitable passing through Parliament.

In light of the federal election that saw Justin Trudeau elected Prime Minister, the status of Bill C-51 is uncertain. Trudeau’s Liberals supported the bill previously, with the caveat that they would repeal the “problematic” elements should they win.

UVic revealed a rainbow crosswalk outside the SUB as a display of solidarity with the LGBTQ community in early July, but the reception was far from sunny.

Members of the UVic LGBTQ community and the UVSS protested the opening of the crosswalk, and argued that the university did not properly include UVic Pride in the planning process.

“Ultimately, the crosswalk is painted across the backs of marginalized and still-suffering queers,” Daphne Shaed said. “It disguises the lived experiences of those of us who attend and have attended this university.”

President Jamie Cassels said that the protesters “laid down a further challenge, and for me, the crosswalk symbolizes an acceptance of that challenge — that we’re going to continue making this campus a better place.”

A sexual assault involving a female survivor and five unidentified assailants occurred on campus in the early hours of Saturday, Sept. 26, and the response from UVic was met with criticism from the UVSS and Anti-Violence Project (AVP).

Director of External Relations Kenya Rogers and AVP Coordinator Carol Bilson both pointed out what they saw as a lack of response from the university, as there was no mention in any university releases post-assault of counselling services on campus, including AVP, until Oct. 2.

Bilson said there is still more work to be done: “[The assault] made [it] clear that our work is really important and that people are not getting the message . . . It’s still an entitlement [to other’s bodies] that people feel they have.”

At the time of writing, there has been no further developments in the Saanich Police Department’s investigation that have been made public.

On Nov. 2, the UVSS and Native Students Union (NSU) opposed the annual Canadian Political Science Students’ Association (CPSSA) National Conference slated to take place this month at UVic. This opposition was based on the grounds that the CPSSA failed to include any campus indigenous groups — including the NSU — in the initial planning, or seek the consent of those groups for hosting the conference at UVic.

However, in what turned out to be a bigger controversy, the Undergraduates of Political Science (UPS) had been granted $6 000 before proper board approval. Revoking the funds put UPS President Wesley Boyd in a tricky financial predicament, and caused tension between the UVSS, NSU, UPS, and Course Union Council.

In the ensuing weeks, the CPSSA and NSU tried working together so that the conference could proceed. However, the CPSSA announced the conference’s cancellation on Sunday, Dec. 13, stating that “not moving forward with the conference will be in the best interests of the student body at the University of Victoria, and for students visiting from other universities.”

Only 17 per cent of eligible students voted, with 1 403 students voting in favour, and 1 662 voting against.

“We feel surprised and disheartened at the results from the Elections Office,” the Collective said in a statement. “We feel that the majority of people who voted ‘no’ may not have fully understood the importance of our services to the community at large.”

Controversy arose when the terms of the referendum were changed halfway through the voting period due to a WebVote ballot error. The ballot originally said the referendum needed a 67 per cent majority to pass, when UVSS electoral policy actually states referendums require 50.01 per cent.