A chat with Fox Glove

The UVic-based band grows in size, reach, and confidence with a new record due later this year 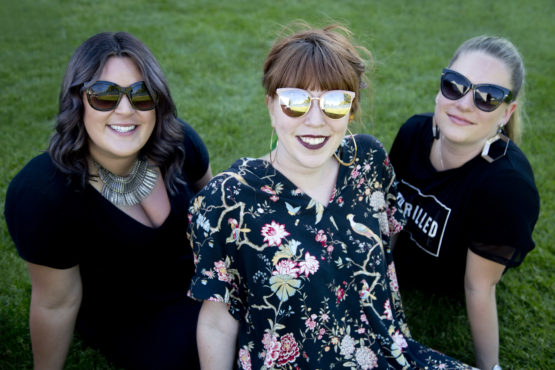 The dichotomy fits the band well. Their haunting harmonies and dramatic songwriting can fill up any space they’re in — whether outside in Langford or in a sold-out Alix Goolden Hall .  But they also have the restraint and softness necessary to bring intimacy to the smaller shows.

Even on their newest single, “Universe Be Damned,” Fox Glove move between acoustic guitar and a quiet drum machine to heavy keyboards and swooping, reverb-ed vocals. Nevertheless, however the music is presented, the voices of Claire Butterfield, Chelsea Kanstrup, and Renn Madeleine Bibeau are always enchanting.

It turns out that’s also the case in conversation, as I found out when I spoke to the band about their start at UVic, their upcoming album, and why they’d like to be on tour with Brian Wilson. 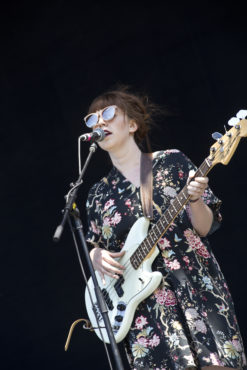 The Martlet: You’ve played on big and small stages throughout your career. Do you have a preference for how big a venue is?

Renn: I really like the big ones, but there’s something to be said for those intimate shows.

Chelsea: I like the connections that you can get. I mean you can connect in the big shows with a lot of people, but I really love those small, intimate shows, like the occasional house concert where you’re completely unplugged, and people are five feet away from you. It can be terrifying, because they’re so close and you’re really connecting, [but] so nice to be one-on-one with them.

Claire: Sometimes being in a room of 20 people is more nerve-wracking than getting up in front of 10,000.

Renn: Oh, 100 per cent. But what I do like about these [big] shows is that people do get to have those moments with you, kind of on their own. Even just walking around to grab some lunch, I had so many different people come and come and tell me about different points of the set that brought up /this/ or made them feel /this/. Whereas the more intimate concerts I feel like you’re all in this together, you’re on kind of the same ride. Yeah, very different.

The Martlet: Rock the Shores is a far cry from Felicita’s, I’m sure! All three of you went to UVic — how did the band come together?

Chelsea: I saw a poster for the UVic Vocal Jazz, and on a whim, joined. And the next year I was on the audition committee. These two both auditioned for the group that year, and the story I won’t go into —

Renn: No, you should! It’s really funny.

Chelsea: So I’m on the audition panel, it’s a very quick thing. Someone comes in, they say their name, they sing their song, they leave. It’s a very fast interaction. I do not do very well at figuring people out very quickly, and I voted against Renn very vehemently. Like, pretty strongly! Luckily, pretty much everyone else on the panel disagreed with me. And then of course I got to know her …

Claire: And you were like, “Oh my god, why wouldn’t I have!”

Renn: Actually, one of the other people who was already in this group came up to me and she was like, “I just want to let you know, don’t get your hopes up. It’s very competitive.” And I almost went, “Maybe I shouldn’t bother even wasting my time trying out.” But I’m glad I did, and I’m glad I got in, because I met Claire and Chelsea.

The Martlet: What precipitated the move from UVic Vocal Jazz friends to bandmates? 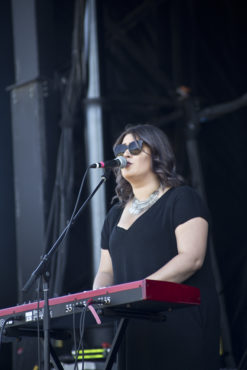 Renn:  I was living in Saskatchewan the summer before coming out and I went to the Regina Folk Fest and saw a band that was very harmony-based called the Secret Sisters. And I thought I’d like to do a project like that, but go one step forward and have three voices so we could have that three-part harmony. And so I was talking with Chelsea one day after rehearsal, in our car, and I went, “Hey, I think I’d like to start this project, would you be interested?”

Renn: And so now we’d kind of become friends with Claire and I thought that voice would kind of round it out.

Claire: I remember seeing Renn walk into the rehearsal and being like, “I wanna be her friend.” And I remember hearing her sing and thinking, “that’s a really cool voice.” And I heard Chelsea’s voice and thought, “That’s a cool voice.” But I didn’t think anything of it at the time. And so when these two approached me and said, “let’s sing together!” . . . we never looked back. We just went with it . . . It’s funny to think of those eight months when we knew each other but weren’t singing in this format. Like I can’t even fathom that, now.

The Martlet: Do you have any advice for other UVic bands and musicians who want to take the next step into the Victoria music scene?

Chelsea: I think the most important thing for us has been for the first part, say yes more than no. Then, once we started to get established, say no more than yes. Or at least to be very strategic about when we can say yes.

Claire: The music industry in Victoria, for a city of its size, is amazing. There’s so much going on here. I think it’s easy to get caught up in everything that’s going on in Victoria, though, and my advice to small bands would be to get up the island as much as you can. There’s Campbell River, Nanaimo, Tofino, there’s a beautiful venue in Port Alberni, actually, festivals in Port Renfrew — there’s so many amazing festivals on the island. Play in Victoria as much as you can, but also start to develop a following in those other places as well.

Chelsea: If you see someone doing something that you like or wanna do, reach out and ask them questions. We’ve done that. I wish we had done it earlier. There are so many people in the industry in Victoria who are willing to share their knowledge and their time and their advice. So just ask. The worst they’re going to say is, “Sorry, I can’t right now,” or “No, I can’t help with you that.” That’s not that bad. At best, they’re going to help you out with things that you never would have expected to happen, and we’ve been really lucky to have that happen for us and now we’re trying to continuously pass that along.

Renn: I think that while you’re here you need to get away from that insular, “it’s my band, it’s my thing, I’m controlling” thing and start collaborating. Let other people in and let yourself out. I’ve certainly seen it push not only our careers but our creative bounds so much, when we said let’s do something outside our wheelhouse, let’s take a chance.

The Martlet: The new album is definitely an opportunity for establishing new creative bounds. How do you feel about the record? 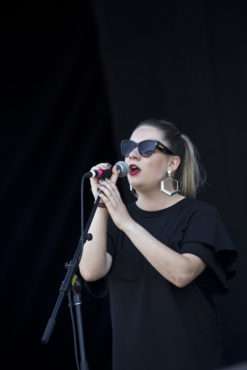 Renn: We’re ready for it to be out. We’re really stoked to share this with our fans and I think it’s also going to open us up to a whole other league of people, who maybe thought we were thing and will start to see that we are many things . . . Our last two records feel a little bit more dated, whereas this one feels — I think our songwriting has gone through its growing pains, our instrumentation has changed, and we just kind of found out what we are as a collective, and this record is really going to be a testament to that.

Claire: One thing we’ve really tried to focused on with this album is making sure that we honour the form that the songs have taken in kind of a performance context and the way that they’ve been, but we also want to give them legs for the future. So we’ve evolved quite a few of the songs in the studio to be quite a bit different than we play them on stage, which I’m really excited about.

The Martlet: I’ll let you enjoy the rest of the festival. Finally, though, if you could collaborate with any other artist playing at Rock the Shores this year, who would it be?

Claire: Mine’s for sure Allen Stone or Bahamas.

Chelsea: I don’t know if I’d be able to decide between the two of those. Also, I have this pipe dream that Brian Wilson may have been listening to our set and may want to bring us on tour. My dad would be pretty stoked if we opened for Brian Wilson. I would be stoked too!

Renn: I’d love to get our soul vocals on with Allen Stone. That guy just rips. Bahamas is beautiful, as well. Really, just any of the artists that are playing here. I’m down for anything. If somebody’s like, “Hey, do you wanna — “ I’m like, “Yes!”

This interview has been condensed for style and clarity.