A conversation with the federal minister of Fisheries and Oceans 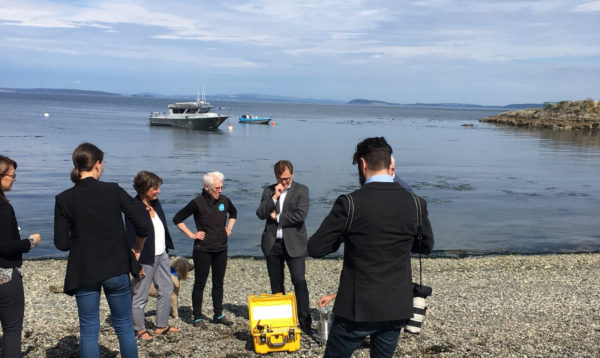 On Sept. 7, the Honourable Jonathan Wilkinson, federal minister of Fisheries, Oceans, and the Canadian Coast Guard, was in Victoria to make announcements regarding government marine and infrastructure initiatives.

During his visit, the minister took time to stop by the offices of Ocean Networks Canada (ONC), an off-campus, UVic-affiliated non-profit initiative that collects data on the physical, chemical, biological, and geological aspects of the ocean.

The minister’s visit provided ONC with the opportunity to present a hydrophone (a microphone used to measure noise in the water) project that the organization has been working on.

Following the ONC’s presentation, the minister answered questions on the subject of the Salish Sea’s endangered Southern Resident Killer Whale (SRKW) population, which according to the U.S. non-profit group Centre for Whale Research, there are 74 remaining as of September 2018.

Speaking in regards to the now world-famous mourning period of SRKW J35 (otherwise known as Talequah) — a situation that involved the orca carrying her dead calf with her for an unprecedented 17 days — the minister said, “I think for all Canadians, and especially for British Columbians, it’s heartbreaking when you see something like that, that expression of grief. There are very few mammals in the world that express grief. The Southern Resident Killer Whales are one of very very few.”

According to the U.S. non-profit group Centre for Whale Research, there are 74 Southern Resident Killer Whales remaining as of September 2018.

He continued, “But I would also say that I personally . . . have been invested in working to save the Southern Resident Killer Whales for the last three years. And the government has taken a lot of really important measures to do that.

“People think about the threats to killer whales as being shipping and acoustic disturbance. And that’s absolutely true. But that’s only one,” he said.

The minister proceeded to name other issues that are currently threatening the survival of the SRKWs, such as the absence of chinook salmon, which is their primary food source, and contaminants in the water. On this point, the minister pointed out the fact that Victoria currently does not have an effective wastewater treatment plant.

“The government has done a whole bunch of things in all of those areas,” he said. “We’ve moved the shipping lanes, we’ve had vessels slow down on major commercial things.

“We’ve put a 200-metre buffer around whale watching and recreational boats so they can’t go close to that. We’ve shut [down] a number of the foraging areas to fishing, [to address] the Chinook issue. We’ve started to fund the wastewater treatment plant here and one in North Vancouver to try and keep the contaminants out of the water.”

“The government has done a whole bunch of things [to save the whales],” he said. “We’ve moved the shipping lanes, we’ve had vessels slow down on major commercial things.”

The minister stated that the government was open to doing more, too.

“We’ve indicated to everybody that we’re quite prepared to do more, because at the end of the day we want to see these whales recover. It’s important from a biodiversity perspective for all Canadians who believe in a healthy environment.”

When asked about the recent federal court case decision — which temporarily quashed the highly controversial Trans Mountain pipeline expansion project — and its potential impact on the SRKW population, the Minister was quick to respond.

“[What the court said] was that the National Energy Board erred in 2012 when it scoped out marine traffic.”

However, the minister noted, despite the errors of the NEB, the government did not fail to take into account the potential impact an increase in marine traffic might have on the SRKW population.

“The government actually recognized that [potential impact] when it came to power in 2015. And the Oceans Protection Plan and the Whales Initiative and some of the things that I just talked about were focused really on addressing some of the threats to whales,” he said.

“B.C. Ferries is probably the biggest problem in the context of noise, that go across between the island and the mainland every year.”

“Irrespective of what was scoped in or scoped out [by] the National Energy Board, we’ve done a ton of work to mitigate the impacts [of shipping] on whales, and I would tell you far broader than just the six additional tankers a week that are coming out of the Westridge Terminal.”

The minister also mentioned the effects that existing commercial shipping, as well as B.C. Ferries, already have on the whales.

“In the port of Vancouver there’s about 3 200 large commercial vessels that go in and out of that harbour every year,” he said. “There’s thousands of B.C. Ferries. B.C. Ferries is probably the biggest problem in the context of noise, that go across between the island and the mainland every year.”

“So, if you’re going to save the Southern Resident Killer Whale, it’s not about mitigating the noise from six tankers, it’s about actually mitigating noise from thousands and thousands of vessels. So the broader issue is how do we actually do that, and I would tell you that the work that we’ve done is about doing that, and the mitigation of the six vessels coming out of the TMX terminal, I mean, we’ve basically done all of that work in the context of actually looking at the broader issue,” the minister concluded.

“It’s not the federal government alone that is going to [save the whales], it’s people who are actually, you know, speaking up and saying it’s important that we actually take action.”

When asked how the minister felt he could reconcile his government’s pursuance of the Trans Mountain pipeline with the protection of Southern Resident Killer Whales, he said, “Well I would just say the killer whale issue is a broader issue than the Trans Mountain issue. I mean, the Trans Mountain issue only adds a couple of per cent or a few per cent in terms of overall traffic in and out of the harbour, and if you take into account B.C. Ferries it’s even smaller than that.”

As for what individuals can do to help save the Southern Resident Killer Whales? The minister said to speak out about the issue, and stressed that it’s also up to municipalities and ports to take action.

“It’s about putting pressure on your municipality or on the port to take actions that are actually going to help to save the whales. It’s not the federal government alone that is going to [save them], it’s people who are actually, you know, speaking up and saying it’s important that we actually take action.”