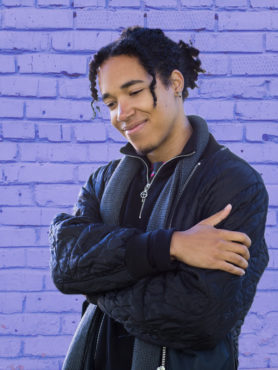 The road to being a successful young musician is paved with nearly insurmountable obstacles. Underage performers have a difficult time playing in clubs and bars where reliable audiences can be found, and while the internet is a great way to get your name out there, it can be hard to stand out from the sea of other artists. Barring a huge break or incredible luck, the most reliable way to make it in the music industry is to work hard and keep looking on the bright side.

The Martlet sat down with Johnny Gr4ves, Victoria-based musician and recent performer at Rifflandia, to talk about what it’s like to be an artist coming into one’s own and overcoming obstacles.

The Martlet: How would you define your musical style to someone who’s never heard it before outside of genre?

Johnny Gr4ves: I would say pure energy and good vibes. Good vibrations, man, you know? Because you know, though I might go on a range of emotions throughout my songs I feel as though it’s always bringing something positive through the message, and that’s really all I’m looking to do with my music. Just give people good energy and positivity make them smile, make them feel good, and share my story.

Who’s your most notable musical influence?

Pharrell is always such an amazing inspiration, not only through music, he’s also inspirational as an entrepreneur and a businessperson, for fashion, production, and just being an awesome person. The person who actually got me into being the person I am today is Will Smith. He is the man, he even got me out of getting arrested. But Billie Eilish, very very well written artist, very good vocals. There’s just too many. A lot of them have to do with the songwriters who become artists. Billie Eilish, Banks, Jon Bellion, Aurora.

How do you feel about the local music scene right now, and what sort of impact do you want to have on it?

I’m so happy that you asked me this question! The local music scene is very talented and wide-ranged. However, it’s all secluded. No one is really working together. So what happens is people they move out to other places in the East Coast, Toronto, Montreal, whatever, even Vancouver, because they don’t feel like they can make something happen here. Now my crew and I, Kris Tang, Brandon Faber, these notable cats were developing a networking platform to bring all of us together and to show “Hey, you don’t need to leave to make it happen.” And so the best thing about that is that it’s all genres, all types of artists, and I’ll be hosting the interview show, and I think that’s super imperative for us to kind of create a name for ourselves. I mean we’re the capital city of B.C., but more people know about Vancouver than they do Victoria. That needs to change! I wanna be the music ambassador here in Victoria, so I want to bring everybody together and creating a community instead of thinking like we need to work alone to make something happen. If we build together there’s so much more that we can do. Two minds work better than one.

What’s been your favourite song to write or perform and why?

Okay, so literally just yesterday, I [wrote] the first song in my new place. I set up my little recording booth in my closet because it’s a big enough closet to make that happen, and magic always happens when you’re at home, you know? And I wrote my first country song. And honestly, it’s a number one country song. It was so fun, because I came from Calgary, I’ve listened to country, and I don’t hate country, but I think that the content of what it is now is a little bit underwhelming — if I might say. So I thought, hey, you know what? I am always here to explore my versatility to see how far I can take myself to test my limits — and in doing so actually broaden my limits.

What do you do to make your shows as fun as they can be for both you and the audience?

To make it more enjoyable, I want to make sure that people are dancing, people are having a good time. Only fun songs on my set! Only songs that you can dance to! And then there’s the off, one song to feel the emotions, but typically it’s just fun, high-octane, “I’m jumping around!” I jumped a little too much maybe for Capital Ballroom, I was pretty out of breath. When I am emitting all of my energy to the crowd, I receive it back. I want to push as much energy out to the crowd as I can, so that I can feel that come back at me.

To my understanding, you hadn’t played at Riff before this year.

I had not played at Riff before. This is actually the first year performing as Johnny Gr4ves — period. It’s crazy because I’ve managed to do three or four festivals, Laketown Shakedown, Song and Surf, Eats & Beats, the Cook Street Village Block Party, and a few shows around that as well.

Playing at Riff was amazing. I was expecting it to be good, and it was great. The crowd interaction was amazing, and what was awesome was seeing how Victoria can turn up. Their engagement was 100%.

Where can people expect to see you in the next few months, do you have any notable gigs or music coming up soon?

Well what’s awesome is that I will be releasing my upcoming EP — my first EP — with production by Unkle Ricky this October. I guess that’s the most notable thing to be coming up very shortly, and I will be also playing in October on one of the Radio Stations here, just a small live set. We’ll see what the rest of the year brings, but based on Rifflandia it should be pretty cool.

Anything we should know about your music that’s going to be coming out?

You know what? I think this is a great place to actually mention the name of the EP, and no one — no one knows about [the name of] the EP yet. This is an exclusive! The EP is called Bits and Pieces. It’s a little four-track EP, more moody, R&B, so everyone enjoys the vibes. That’s coming soon.

Bits and Pieces was released on Oct. 19 and can be found at www.johnnygr4ves.com or on his Spotify channel here.

This interview has been edited for clarity and brevity.