The Phoenix Theatre’s Production of The Drowsy Chaperone is a grand spectacle done through the parody of classical musical tropes. What sets it apart is its clear dedication to its audience. It makes no attempt to be high art. In fact, it often makes fun of the very tradition of musicals. This, of course, is not without hiccups.

Character actors are required for such a witty and quick script. Luckily, the director Jacques Lemay seems to have a large call sheet of such persons. Honourable mentions include Aaron Smail and David Cosbey — they earn their laughs not just through physical comedy and choice accents, but by (smartly) playing opposites to each other’s size and vocal range. Another honourable mention goes to Ciaran Volke. Though his role has the least amount of jokes built directly into the script, he has everyone (but himself) giggling the whole show. 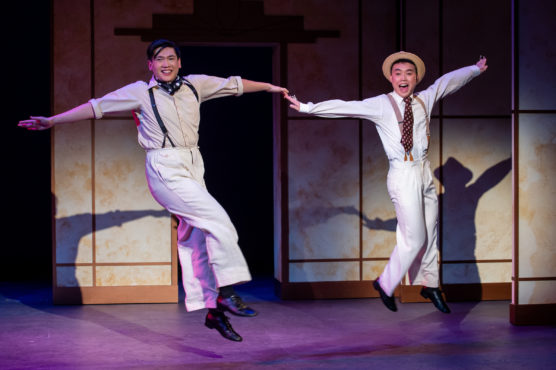 The ensemble works together to command the stage, thrilling the audience with comedy and a wholesome undertone. Several numbers beg standing ovations in and of themselves. What can become simple in comparison to these grand showstoppers are the solos and duets in the show. The fewer people on stage, the harder time those actors have with commanding the stage. Many of them struggle to hold their own.

What The Drowsy Chaperone lacks in fine tuning of some key moments are only speed bumps in an overall entertaining show.

This generalization does not include the musical’s narrator and main character ‘the Man in the Chair,’ played by Douglas Peerless. Though he begins with a hasty monologue, his energy, tone, and dedication to the character grants him synergy with the audience that the other players often lack on their own. 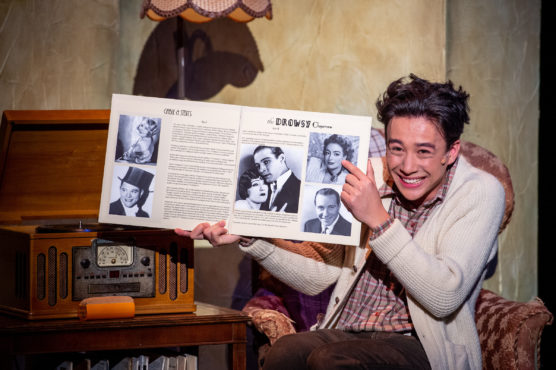 The Man in the Chair (Douglas Peerless). Provided photo by Dean Kalyan.

The costuming by Graham McMonagle shows not just research of the 1920s, but an attention to detail that makes each character unique. No stylistic trope is used twice. The only mundane choices are for The Drowsy Chaperone herself whose outfits lack the excitement that the other character’s costumes have. For the titular character of this musical, it seems odd that she is drowned out in oversized floral blouses and cumbersome beads.

The moving sets of the show contribute to the spectacle that keeps the audience in awe. We feel transported from a lonesome apartment to a life of luxury at the beginning of the 20th century. It is smart to give the detail that Bryan Kenney and his crew do to the Man in the Chair’s apartment, given it is the set that the audience settles in to.

Put together, the musical is everything that is expected of it and sometimes more. What it lacks in fine tuning of some key moments are only speed bumps in an overall entertaining show.

Please note: This show was reviewed during a preview showing and changes may occur prior to opening night.

The Drowsy Chaperone will be showing at UVic’s Phoenix Theatre until Nov. 25. For more information or to purchase tickets, visit https://finearts.uvic.ca/theatre/mainstage/season-2018-19/drowsy-chaperone/