A new chapter for Indigenous rights 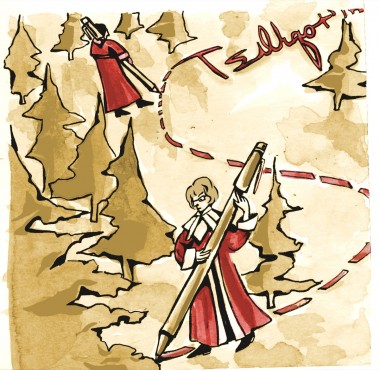 UVic meetings often begin with an acknowledgment of the unceded territories, a few sentences reminding participants of the history of campus land: that it, like most land in this province, has never been relinquished by its original Lekwungen and W̱SÁNEĆ inhabitants through a negotiated treaty. The Government of B.C. has maintained that most unceded territory belongs to the Crown.  However, a recent Supreme Court of Canada (SCC) decision refutes this. The language of the ruling was unambiguous, though its consequences may not be so clear.

On June 26, the SCC ruled that the Tsilhqot’in First Nation have title to 1  700 square kilometres of land where no treaty has been signed. This ruling is hailed as an unequivocal victory for the Tsilhqot’in and a landmark case for Indigenous land rights in Canada. In one stroke, the Supreme Court ruled on a number of issues including the criteria for Aboriginal title and parameters for provincial jurisdiction over unceded lands.

One of the main points of contention surrounded the meaning of “occupation,” the linchpin issue that supports any determination of Aboriginal title. The Tsilhqot’in, a semi-nomadic nation, hunted, trapped, and fished in the disputed area, but an appeals court felt that was not enough to imply ownership. It instead favoured a much narrower definition of occupation. It was one that required “intensive presence at a particular site.” The SCC felt this was a European model, one that “accords no weight (let alone equal weight) to Aboriginal perspectives on occupation or the manner in which the society used the land to live.” According to the SCC, the appeals court decision “removed ‘Aboriginal’ from ‘Aboriginal occupation.’”

More broadly, uncertainty surrounds the legitimacy of First Nations voices. This particular case has been winding through the courts for two decades, but the rights of Indigenous people have been debated for over two centuries. It stands to reason that land occupied by one people should not be ceded to another people without express permission, but that’s ultimately what is at stake. The Royal Proclamation of 1763, which stated it was “reasonable and essential” for European settlers not to infringe upon land that they had not received or purchased from its original inhabitants, did not simply disappear. Though the law is centuries old, its spirit suffuses the SCC judgment. The Forest Act was deemed to infringe on the Tsilhqot’in Nation’s right to consultation, which has clear implications for other resource extraction projects in the province.

Significant portions of the planned Northern Gateway and Kinder Morgan pipelines run across the unceded territory of several First Nations groups who are highly opposed to these projects. The Tsilhqot’in Supreme Court decision strengthens their territoriality and potential court challenges. How this will play out in other cases is uncertain. What is clear is the gulf between how most Aboriginals propose to manage natural resources and the imperatives of the provincial and federal governments. Most groups are staunchly conservationist and have committed to securing their lands and environments for future generations.

This ruling is more than a mere legal nicety; it fundamentally transforms the hundreds of territorial negotiations across Canada. It buttresses a growing consensus around Indigenous possession and right to consultation. Most importantly, by acknowledging the Tsilhqot’in title, it pushes the dispossession and exploitation of our Indigenous people further into the reaches of history. Hopefully, in our community it will turn an obligatory ceremonial acknowledgment into vital reconciliation.