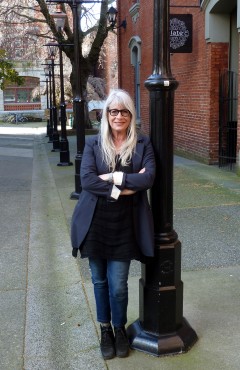 Dr. Jennifer Wise, wrote A Queer Trial, a site-specific play to be performed by her THEA 311 class at Bastion Square on April 14. Photo provided by Department of Theatre

Tucked in a corner of Bastion Square, just outside the former B.C. Maritime Museum, a troupe of theatre students are singing. Their voices echo throughout the square, drawing curious looks from passers-by. As they run lines, the students stand on the very spot where convicts were once hanged.

For months, the class of nearly thirty students has been busy putting together a show which they will be performing in the Square this Friday, called A Queer Trial.

A Queer Trial is a satirical critique of bigotry, says Dr. Jennifer Wise, who wrote the site-specific play for her THEA 311 class at UVic. The play was written to honour the memory, suffering, and lived experiences of minorities in Victoria and, speak to the power of ordinary Victoria citizens to rise up and defend a fellow community member.

The play tells the story of an openly gay man living in Victoria in 1860, who is accused and acquitted by two successive juries of sodomy charges. It was heartwarming, says Wise, how this event came to pass, and made her proud to be Victorian.

“History isn’t all dark” she says, adding that the story told in A Queer Trial is contrary to historical expectations of gay rights. “It’s quite an amazing story. Very uplifting, very inspiring, actually.”

The show is the culmination of the THEA 311 site-specific theatre course; rather than being performed in a theatre, site-specific pieces are performed in contextually relevant community locations. A Queer Trial, for example, takes place where the yard of the colonial jail was once located.

Much of A Queer Trial’s success centers on Wise’s ability draw in a large class of passionate students.

As such, says Wise, the students have been responsible for playing all roles of an actual theatre company: creating costumes and props, handling communications, writing and arranging the music, acting, and producing the show. It is being directed by UVic theatre alumnus Matthew Payne, artistic producer of Theatre SKAM, which has a national reputation for site-specific theatre.

“If I was writing this for the professional theatre, you can’t write a play for 25 actors because professional theatres don’t have the money for that,” Wise explains. “But doing it as a class . . . enabled me to tell the story in the right way with most of the people who were in the prison on those days.”

While the cast of A Queer Trial is quite large, Wise acknowledges that even in a piece based on minority identities, it is not always possible to have a cast that is a complete representation of those identities. She is extremely excited that an African-Canadian actor from UVic joined the company to embody the role of an African-American juror with truth, and that actor Eddie Mack is not only acting in a key Indigenous role, but also wrote pieces of dialogue in Nuučaan̓uł to add an extra layer of authenticity to the production.

Wise is hopeful that the show will be a hit with audiences too, saying that site-specific theatre is often exhilarating for audiences, given its vivid and immersive nature.

Wise says the course itself is one of the most successful she’s ever taught. Not only have the students been able to practice theatre-related skills, but it’s also been an immersive way to study history.

“It’s probably one of the classes where I’ve learned the most and gotten the most excited about because we’re actually hands-on practicing and doing it,” Mailloux says.

“It’s an innovative approach to teach us history that I think is more engaging than I’ve ever experienced before,” she adds, saying the students have had opportunities to go on field trips, be toured around the city, and learn in and out of the classroom.

“This is the first time that I think a lot of us have ever gotten to work a site-specific piece, but it has generated momentum,” says Mailloux. “I am working on another one now because of this. It’s a very interesting way of doing theatre.”

A disadvantage of site-specific theatre?

“We have no control over the weather,” laughs Wise, saying they’re all praying for sunny skies.

Wise is hopeful that producing a site-specific show can become a regular occurrence in the theatre department.

“There are many stories in Victoria to tell,” she says.

A Queer Trial will run twice on April 14 at 2 and 4 p.m. in Bastion Square, and a preview is running tonight at 6 p.m. Seating will be limited. For more information, contact UVic’s Department of Theatre at 250-721-7991.