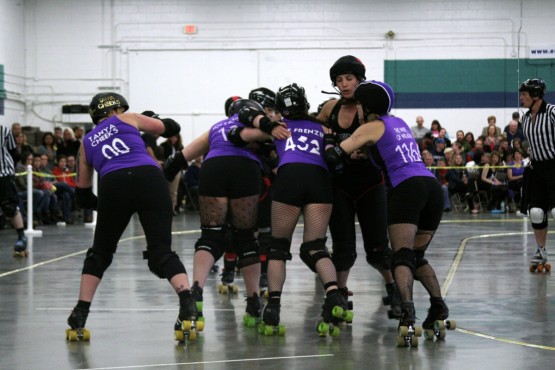 The A-Team struggled to hold their own durring their home opener April 25, at Archie Browning Arena in Equimalt. Photo by Riley van der Linden (Photo Contributor)

Thrilling action. Dazzling skill. Lightning speed. Two teams battering each other black and blue, leaving it all out on the rink. No, it’s not the NHL playoffs — it’s roller derby.

When I arrived at the Archie Browning Arena in Esquimalt for the Eves of Destruction home opener, I was greeted by a large crowd cheering as two women met in a bruising clash. The two players both fell painfully to the ground, as another player ghosted in from behind and skated gracefully past the mess of limbs lying tangled on the track floor like two octopi on treadmills. It perfectly represented the dichotomy at the heart of roller derby: the beautiful and the brutal.

“Traditionally it’s been girls in fishnets — and beer.”

That’s Esther Beauregard, the head of media for the Victoria Roller Derby organization Eves of Destruction. Beauregard also plays roller derby herself, going by the name “C3P-Ho”. She tells me how the Eves of Destruction organization was founded in 2006, inheriting a quiet roller derby history in Victoria, but, by the looks of things, that history is getting louder and louder.

“I love it,” says Beauregard. “It’s a full-contact sport, but the atmosphere is very great. It’s very supportive.”

Roller derby was founded sometime in the 80s, but has picked up in recent years thanks to numerous documentaries and films — the most popular of which is the 2009 film Whip It, starring Ellen Page and Drew Barrymore. The film’s influence is felt in Victoria as well, with a man in front of me wearing an “Ellen Rage” shirt.

The A-Team skated around the track to rapturous applause. The Anarchy Angels from the mainland watched from the sidelines, though they also brought a number of fans with them. Both teams were introduced on the loudspeaker, with each players’ derby names including either a pun or a sexual reference — oftentimes both.

The sport is played between two sides, with 14 players on each team. Each team fields five members at a time: four blockers and one jammer. The jammer gets a point for lapping each of the opposition’s blockers, who, in accordance with their names, do their best to stop the jammer from getting past. The sport is full contact, with the blockers doing everything short of murder (with murder in this case being the blocker’s use of hands, head, elbows or feet) to stop the jammer from scoring.

Despite the rambunctious nature of the game and its players, the mood around the arena was sobered by several touches of blue. Both fans and players were dressed in turquoise in honour of Casper, a transgender derby athlete who died of suicide in Michigan earlier this month. This might seem out of place amongst the campy, upbeat atmosphere around the arena, but it was an important display of community spirit — part of what makes roller derby so appealing to its players.

“Roller derby is a place that has traditionally been a lot more open to people that don’t fit a heteronormative gender stereotype, which is really great for a lot of the people: the players, the refs, or the fans,” says Beauregard. “It’s a safe place, and, like I said, we don’t tolerate homophobia, transphobia, or any sort of bullying here.”

Safe space it may be, but gentle one it isn’t. Within seconds of both teams starting their bout, the hits are flying fast and furious. Roller derby lends itself to “oof” moments, with hard hits and pile-ups being the name of the game. Both teams took turns to throw their bodies around, but as time passed, the score difference between the two got more and more pronounced. The Angels took a large lead and didn’t relinquish it, eventually winning 265-41.

With many more games in the season to come, however, Beauregard is convinced that those who come down to watch will be in for a treat.

“It’s full action, full contact, with a lot of hard hits . . . you can come out and think it’s just entertainment, but at the end of the day it’s a real sport with real athletes, and if you come looking for a show, you’re going to leave thinking, ‘holy crap, those women are really tough’ and that’s really great.”