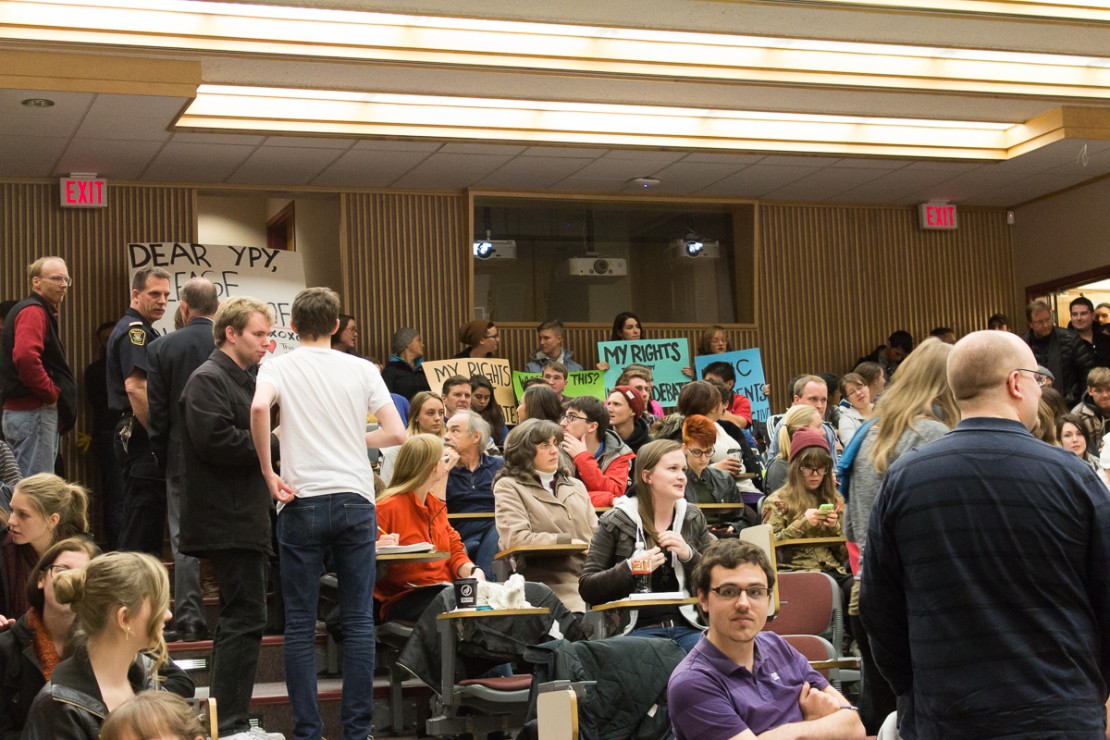 Protestors interrupt a debate on the ethics of abortion in the David Strong Building at UVic on Fri. Nov. 14, 2014. —Adam Hayman (photo)

During a Youth Protecting Youth (YPY) organized debate on abortion at UVic on Nov. 14, a group of women, including some students, protested the event with chants of “No Debate” whenever Stephanie Gray, an opponent of abortion, attempted to give her opening statements.

“They were holding signs up and started chanting over the speaker,” said Michael McDonald, an audience member and the vice-president of UVic’s Young Liberals. “[The protest] continued to escalate so they paused the debate and asked security to remove them.” The protesters met the threat of police action with unmoving dedication. The group remained for roughly 20 minutes before they left. Ultimately, they were not forcibly removed.

Gray, the executive director and co-founder of the Canadian Centre for Bio-Ethical Reform (which lobbies against abortion), joined UVic professor Eike-Henner Kluge, who took the pro-choice side. Dr. Kluge, who has been a director of the Canadian Medical Association’s Department of Ethics and Legal Affairs, teaches bioethics at UVic and has advised Health Canada on medical ethics. Neither party supported the chants during the debate’s beginnings. Kluge went so far as to quote German thinker Friedrich Schiller by saying, “against stupidity the gods themselves fight in vain.”

“I’m pro-choice myself, but I certainly believe we should be able have an intellectual discourse,” said McDonald. In a text, he later clarified that “even though I felt the shouting hampered the intellectual discourse, the protestors were within their legal rights to raise their voice, and I would defend their right to do so, even if I disagreed with the shouting.” The protesters thought otherwise. They felt that, as women, their rights should not be under debate. One member, Alexah Konnelly said, “Everybody who is sitting in the audience today was treating this like this was really benign, and really innocent when actually Stephanie Gray’s organization is actively lobbying to restrict women’s safe access to abortion in Canada.”

“She is here with the intent of recruiting people to restrict safe and legal access to abortion and we are absolutely not willing to allow any farce like that to go down on campus,” Konnelly said.

This is not the first debate between Gray and Kluge that has drawn controversy. In October of 2009, both debaters held two events at UVic that attracted protesters with similar signs and stances.

One of YPY’s co-presidents, Adrian Canagasuriam, said, “I think the crowd wanted to engage with the debate and they didn’t want to tolerate obnoxious interruptions. We’re happy that problems were eventually solved and we were able to continue.”

Police did arrive on campus, but there was no word that any charges did or even could have been made. “We went and we shared our message and that’s what matters,” said Konnelly.

Correction: The original article erroneously stated that Michael McDonald was the leader of the UVic Young Liberals. He is in fact its vice-president. In addition, Adrian Canagasuriam is a co-president of Youth Protecting Youth, not a founder. The article has been amended to reflect this.