Aces high: Soaring over Victoria in the Aluminum Overcast 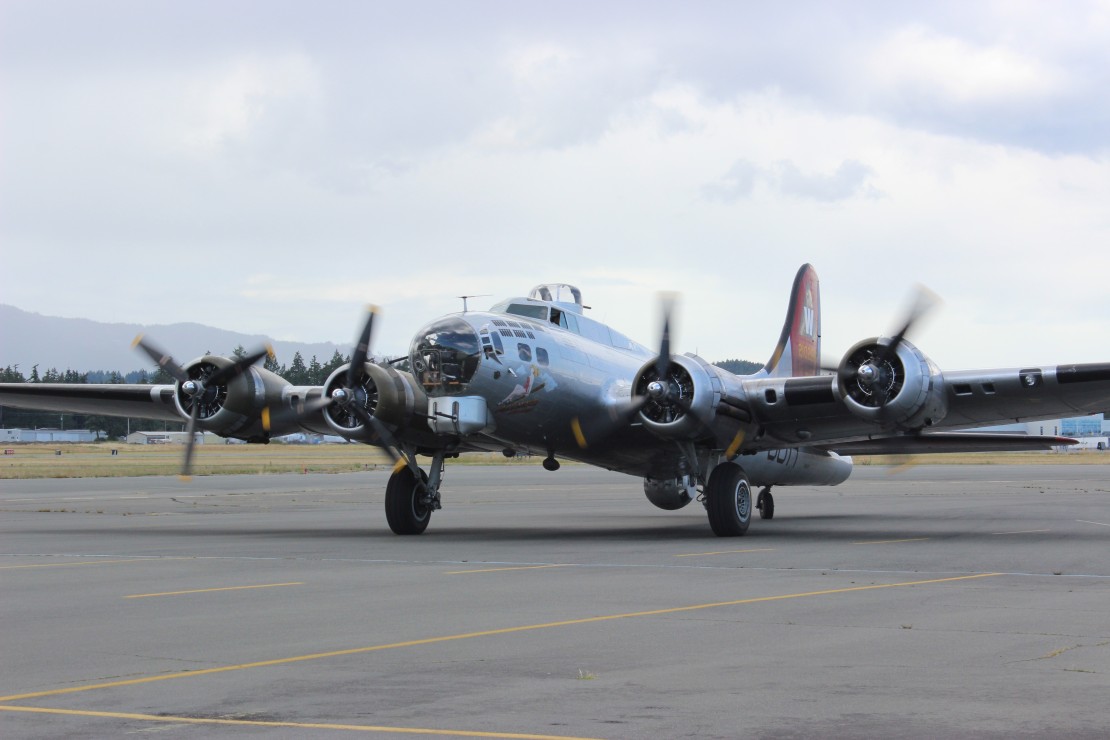 The Aluminum Overcast comes in after landing at the Victoria Flying Club. Photo by Myles Sauer, Editor-in-Chief

In writing and editing for the Martlet, I come across stories of all sorts: a Vikes win here, interdepartmental squabbles there, stuff like that. But for the most part, things stay pretty grounded (despite our namesake’s inability to land properly).

This made it all the more curious when we received a media invite from the Experimental Aircraft Assocation (EAA) to take a flight aboard the Aluminum Overcast, a restored Boeing B-17 Flying Fortress, at the Victoria Flying Club (VFC), just outside the Victoria International Airport. Never one to pass up a free anything, I RSVP’d right away.

And so, without any regard for the risks of putting both full-time Martlet staff on the same plane that could theoretically crash, my co-worker Alex and I set off for the VFC where our aluminum chariot awaited us on Thursday, June 16.

The Boeing B-17 Flying Fortress is a four-engine heavy bomber developed for the U.S. Army Air Corps during the Second World War. The Overcast is one of 12 732 B-17s produced during that period, and one of 10 that are still airworthy. It’s also loaded with 13 .50-caliber machine guns, and while I’d hate to fetishize weapons of war, they are pretty badass.

“This thing would light you up,” I said to Alex as we gawked at the silver machine perched on the runway. Guns on guns on guns. I scribbled my observations down on a notepad, which also included such half-finished thoughts as “real journalists” and “how do planes fly?”

Flying the B-17 is akin to driving a cement truck without power steering, as EAA volunteer pilot Lorraine Morris so eloquently explained.

“Everything on this is mechanical,” she said, comparing the plane’s mechanisms to modern planes like the Boeing 777, which she also flies. “There’s no boosted anything, there’s no hydraulic-assisted anything.”

During the Second World War, the plane travelled from England all the way to Germany, where it would perform its bombing runs before turning around and making the long flight back. And before the introduction of fighter planes with long-range capability, the B-17 was often making those trips solo, hence the need for some sturdy defences.

“[The B-17] had a reputation of taking a beating and coming home,” Morris said. “The skin itself is very thin, but the structure is so strong, you could shoot off half the tail and it’d still make it back.” Nice.

But we could talk about the plane’s long-range capabilities and rugged exterior all day; how’d it feel to fly in the damn thing? Well, as somebody who never cared much for the whole to-do that is flying commercial, taking a trip in a restored warbird was pretty cool, don’t mean to brag or anything (though it was a bit shaky).

After a safety briefing where we were warned that the plane had a Limited Airworthiness Certificate and not a Standard Airworthiness Certificate, and told to take our sick bags off the plane should we vomit, we were taken up for a 15-minute trip around Greater Victoria region. I may have spent too much time looking through a camera lens instead of a window, but we still caught some choice views of the Saanich Peninsula and downtown Victoria.

And just like that, we were ordered back to our seats to prepare for landing, and then the trip was over.

Back on the ground, we spoke with Ramona Reynolds, VFC president, about what it meant for an organization like the EAA to bring the restored B-17 to Victoria.

“It’s pretty amazing [having the Aluminum Overcast here],” she said. “We’re a bunch of airplane junkies. So for us this is a really big deal.”

“It’s really exciting, and of course it’s a piece of history . . . It’s always very exciting when we all get to come together and appreciate this piece of beautiful machinery.”

Indeed, an appreciation of history was in no short supply that afternoon, as aviation aficionados young and old came to check out the Overcast, with more slated to come that following weekend. And for Morrison, who has no personal connection to the B-17 pilots of yesteryear, that appreciation is what it’s all about.

“This is a way to give back and honour the veterans, because you don’t realize what they gave up until you start reading the books about it,” she said. “Gosh, you start tearing up and feeling the hardships they endured. Amazing.”