After-party antics aside, SweetLeaf anything but rude 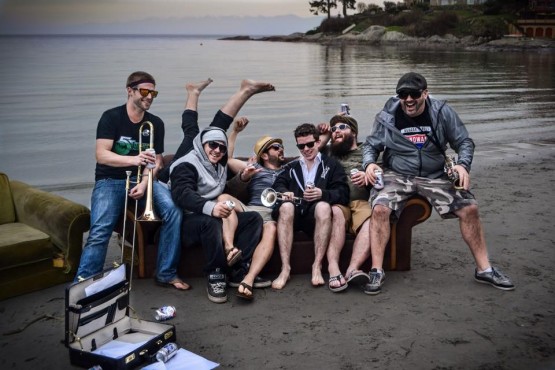 SweetLeaf, seen here having a time, will be playing Rudefest on Friday, Oct. 16. Photo by Kristen Cook.

Feeling the buzz? On Oct. 16, local band SweetLeaf will perform at the Victoria Event Centre as part of the third annual Rudefest, an all-ages concert celebrating B.C. ska music.

“It is a great opportunity to rock out for the 19-and-under crowd . . . We almost never get a chance to play for [them],” says Jones. Rounding out Rudefest’s band lineup are The Brass Action, The Leg-Up Program and Morning Mayhem.

Since forming in 2012, SweetLeaf has rocked the Victoria circuit, playing at venues such as Sugar, Distrikt and Lucky Bar. Regularly attending their gigs is a nucleus of hardcore Victoria ska enthusiasts as well as more casual fans, live music lovers, and curious souls simply out for a good time. In Jones’ words, “[There are] a shit ton of our friends, and a bunch of people surprised there’s been a band as kick-ass as ours right under their noses for the last three years.” He adds that members of Victoria’s ska scene are “easily the most accepting, unjudgemental [sic] group I’ve ever known” and are not standoffish toward newcomers. Even the bands intermingle with one another; Jones doubles as a member of the Leg-Up Program, and Knippel plays for Morning Mayhem.

Earlier this year SweetLeaf dropped their debut album, Stress Leave. The music is as heady as the band’s namesake, combining butter-smooth horn harmonies, punchy rhythm guitar, entertaining lyrics, rock-steady bass lines and drumbeats that keep your feet tapping. With influences ranging from Paul Simon to Nirvana, SweetLeaf unashamedly samples non-ska genres to help hone their sound. As Jones puts it, “I don’t consider us to be a ska band. I write a song and it just comes out that way. We just happen to have horns and play a lot of upstrokes.“

In addition to their musical talents, SweetLeaf is known for their debauchery. Jones is upfront about his band’s indulgence, describing SweetLeaf as the hardest-working, hardest-partying ska act in Victoria. The ensemble’s after-party merrymaking sometimes lasts until the following afternoon, and they have even been banned from certain hostels due to their rowdy ways. Although these admissions might be off-putting for some, they undeniably add to SweetLeaf’s mystique, signaling an element of danger sorely lacking in modern pop culture. Jones makes it clear, however, that SweetLeaf’s first love is music: “The party is just the icing on the cake.”

If you want to find out more about SweetLeaf or Rudefest, you can visit their Facebook page or go to sweetleafmusic.com. Rudefest takes place Oct. 16, 8 p.m. – 1 a.m., and tickets cost $12–$14.50.  Alcohol will be available for those who are 19 and older.