Dressed in a Team Italy climbing shirt, Ali Funk finishes another training session on the wall at Boulders Climbing Gym in Victoria. Last month, while wearing her Team Canada gear in New Caledonia, Funk wasn’t just training: she was fulfilling a dream.

Funk first took to the wall when she was 10 at her brother’s birthday party. “My brother and I both really liked it. Then my dad took a course so that he would know [about climbing] and he could teach us,” said Funk. “We started doing youth programs and then we got better than my dad. Then we just progressed up the youth programs at the [University of Alberta].”

She started to compete in local and regional rock climbing competitions at the age of 12, with her first competition in Calgary. Funk laughs when recounting the experience. “I didn’t even have a harness at that point!”

“From the beginning, even when I wasn’t very good, I always wanted to make the national team. Even though it was not really a reality in my earlier years,” said Funk. “Then each year I got progressively closer and closer and [expectations grew] as well. So it’s always really stressful and I’ve had a few really heart-breaking nationals. But my last nationals were really awesome so it was nice to end on that [note].” 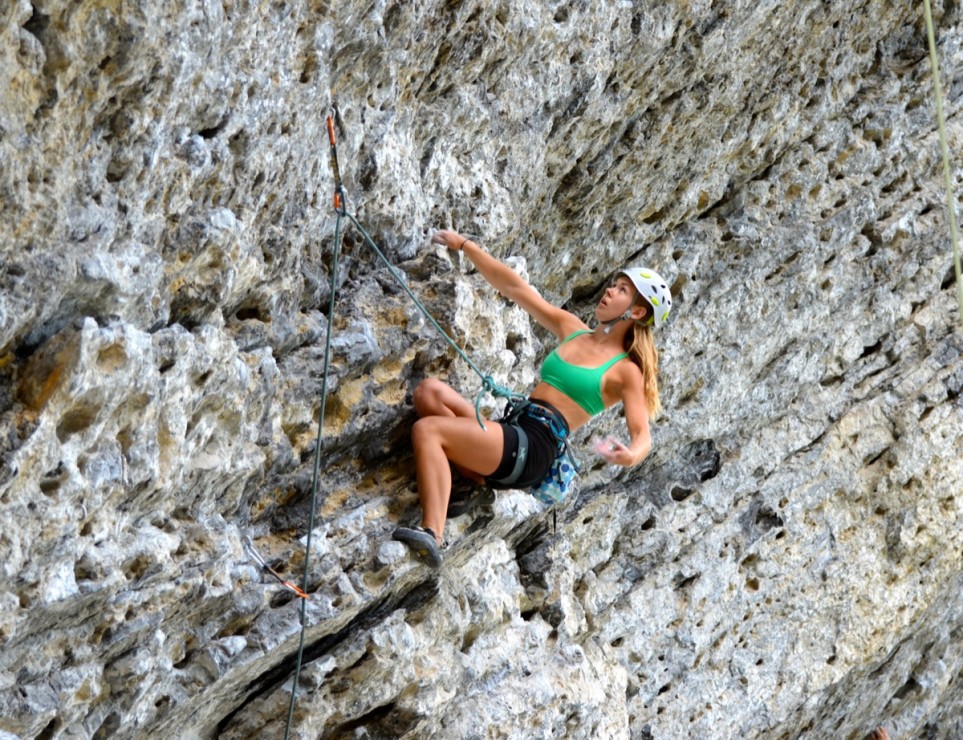 While at the IFSC World Youth Championships, Funk climbed in a type of competition called lead climbing. The goal is to climb higher than the other competitors before falling, with the ultimate goal of reaching the top. Each climber is given an assigned route and can only use the holds on the route. The judges scorecard includes a picture of the route and the holds on it. They mark how high the climber gets and score based on how the climber uses their body to reach the hold.

Initially, Funk was disappointed when she didn’t make the team, as it was her final opportunity to qualify for the youth team, but with a teammate unable to compete, she was on her way. For the next four months, she spent endless hours at a climbing gym in Edmonton and training with Team Canada, finally making it to Noumea, New Caledonia (a French island off the coast of Australia) for the competition from Sept. 19-23.

Funk made it to the semi-finals and placed 24th in Female Junior Lead category. “I definitely was very overwhelmed. I said to myself ‘Oh my God, I finally made it. I’m so happy.’”

Funk credits climber Sasha DiGiulian as one of her many inspirations. She admires DiGiulian’s ability to balance a career as professional climber and as a student at Columbia University in New York. DiGiulian’s example seems to influence Funk’s own life as well. Aside from climbing, Funk is also committed to her education: she is in her second year at UVic as a social sciences student, but hopes to enter the recreation and health education program.

Even with the IFSC World Youth Championship complete and her youth-level climbing career over, Funk is not done climbing. “It’s been a big part of my life and I’m sure it will continue to be.”