An insider look at the UVic Vikes varsity teams

Get to know your UVic Vikes sport programs, from a Vike 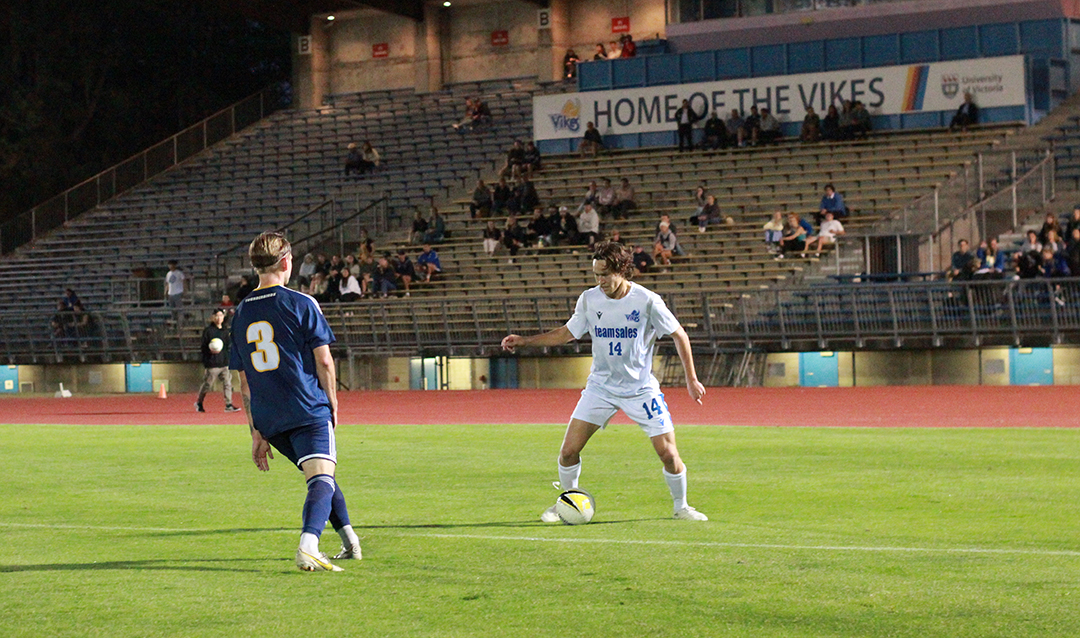 If you’ve been on campus for a while now it’s likely you’ve noticed a few things. Maybe it’s those navy blue backpacks, or the hoards of people dressed in Vikes gear entering and leaving CARSA.

Well, if you have noticed these things, you’ve encountered a varsity athlete. UVic offers a host of varsity sports, and maybe you should become familiar with the teams and how you can watch them compete. Take it from a Vikes athlete, here’s what you need to know about the teams.

The UVic Vikes have 15 varsity teams. These programs include soccer, rugby, cross-country & track, rowing, swimming, basketball, golf, and field hockey. With the exception of field hockey, each sport has a men’s and women’s team.

Soccer is one of the first sports to start the year, with games starting in late August. Both teams have one of the more recognizable events at UVic, with Thunderfest headlining the first weekend after classes begin. The sport has won six total U Sports national championships for UVic. The men’s team has also produced six olympians, all of whom competed in the 1984 Olympics together.

This year, the women are off to a decent start, sitting just below .500 and tied for a Canada West play-in spot. The men have been below average, but have a good home record at 2–1–2. The women will play their final home games this weekend to close out the regular season, with the men concluding their season at home the following weekend.

In terms of national championships, rowing takes the cake with 18 national championship wins shared between the men and women. Both programs showed this level of prowess last year, with the men finishing first and the women finishing second at the Canadian University Rowing Championships. The rowing program has also produced a UVic high of 107 olympians (55 women, 52 men).  The rowing teams’ first event was the Western Canadian University Championships on Oct. 8. You can catch them race the Head/Tail of the Gorge on Oct. 22 and 23.

Vikes Swimming will also be hosting their first competition that weekend at the Commonwealth Pool on campus. As a team, the swimming program’s highest finish at U Sports is second, achieved by the women’s team in 2000, but they have seen some incredible individual performances, with at least six medals each of the three years prior to 2022, and a total of eight gold medals in that span. Vikes swimming has also seen their fair share of Olympians, with 23 going to the biggest stage in the world.

The women’s field hockey program is also no stranger to success, producing 10 olympians as well as having the most national championships by a single team at UVic with 14. They have been impressive of late, with three straight U Sports championships and losing only three games in that stretch. The team has continued in that fashion, going undefeated in regulation through four games in U Sports competition, as well as undefeated in the preseason versus Ivy League schools Pennsylvania, Yale, and Columbia. They will play their first game on the refurbished turf this weekend on Oct. 15 and 16 against the University of Calgary Dinos.

The women’s rugby team is off to a hot start as well, undefeated at home and sitting in 2nd place with a record of 3–1. The men are also doing well, starting 2–2.  Both programs have produced silverware for UVic and as well as Olympians.

Men’s rugby has won eight national championships, including five in a six-year period for the 7’s team. The women have had a lot of recent success becoming national champions in 7’s for the first time in 2017 and then winning again in 2019. The two teams have also combined to send five athletes to the olympics. The women will play their next home game at Wallace Field on Oct. 15, and the men play on campus again on Nov. 5. The women will also be hosting the U Sports Championship this year, set for Nov. 2–6. The rugby teams also compete in the second semester, so keep an eye out for that schedule to drop as well.

The cross-country and track team season is also split in two, with the cross country season taking place in the fall, and indoor track season in the winter. We opened our season in September, and will compete again at Canada West championships on Oct. 29. The program has had a successful history, with 14 national championships and 12 Olympians having graced the team. The cross-country and track team  is the only one without a home competition scheduled this year.

Arguably, the teams with the nicest home court are the basketball teams. The men and women are currently in preseason, with both competing in tournaments prior to the season starting in November. If you like coincidences, the basketball programs provide a pretty cool one. The women’s team has won nine national championships and they have had nine Olympians. The men have won eight championships and have produced eight Olympians. Both teams will open the season in Lethbridge, Alberta on Nov. 4, and will play their first home game Nov. 11.

While basketball has yet to begin their season, golf just wrapped up theirs. The men’s and women’s golf teams also just hosted Canada West championships. The men’s team won the banner, with the women’s team earning second place and as well as the individual gold. The golf teams have been successful with the women winning nationals in 2008 and the men winning three times in five years. They are the only team at UVic that competes against American schools in the NAIA.

If you want to support the Vikes, go to home games and cheer on the blue and gold. Who knows, you might be cheering on a future Olympian.