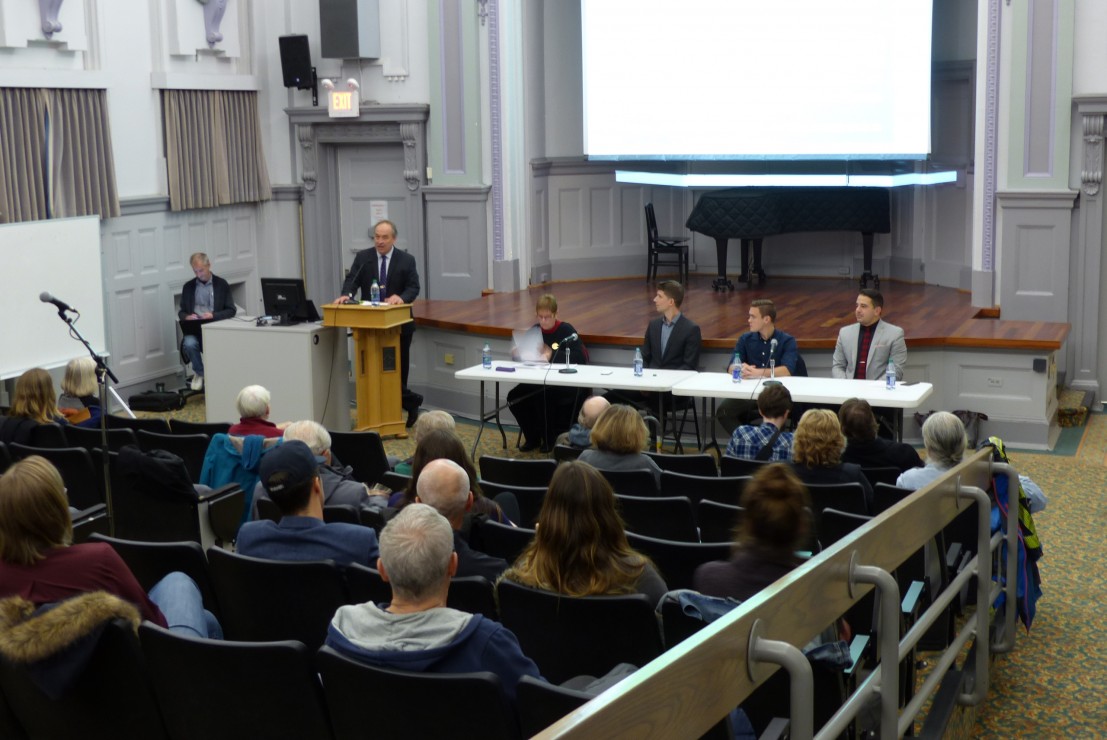 Andrew Weaver (at podium), MLA Oak Bay-Gordon Head, hosted a town hall around the issue of housing in B.C. at Camosun College Lansdowne. It was the second housing town hall in a week. Photo by Colin Grainger

Student housing and Victoria’s rental market were the focus at a town hall on the housing affordability crisis, which took place on Oct. 18.

Green Party MLA Andrew Weaver and a panel of experts held presentations at Camosun College Lansdowne to a crowd of about 60 attendees notably missing a student demographic.

Alex McGowan, chair of the Alliance of B.C. Students (ABCS), a not-for-profit student advocacy group, said students need more rights and protections when it comes to housing. “This is getting to the point where we’re kind of up against a wall. We need the government to take some action.”

“In the last 10 years, outside of UBC, no post-secondary institution has built housing . . . because the provincial government is saying ‘no,’” McGowan said, referencing the province’s refusal to take on the debt.

During a question and answer period, Weaver remarked that he didn’t understand how universities could build sports facilities and academic units with money that’s borrowed, but not housing. “I don’t get this argument, honestly,” he said.

Citing a study by Focus Magazine, Cairine Green, a former city councillor for Oak Bay who currently serves as Board Director for Our Place Society, says more than 50 per cent of Victorians rent and that student housing is a major issue. “30 years ago, a one-bedroom apartment with free parking in James Bay was $315 a month, and today for a similar unit without free parking in that same area is $1 250 per month.”

Eric Swanson, executive director of Generation Squeeze, a collaboration of different entities advocating on housing affordability for the upcoming generation, compares today with what young people starting out had to contend with in 1976. Household earnings are down and work is more precarious, he said, despite young people being twice as likely to have a post-secondary education.

Swanson said that it would take five years to save a down payment for a house in 1976, but the average in B.C. today is about 16 years. In Metro Vancouver it takes 23 years, and Victoria would be between those two. “That means you’re going to have to start saving for a down payment the day you’re born,” Swanson said.