App your phone: Be your own boss

Produced by WorkBC, the Boss Yourself app (available for Android and iPhone) is designed to inspire and educate youth considering starting their own business.

Even though Boss Yourself appears to target teenagers in, or about to finish, high school, I hoped the app would provide useful advice and inspiration for anyone who has a business idea. The app’s title made me feel like it would have a feature offering the user some sort of daily encouragement. 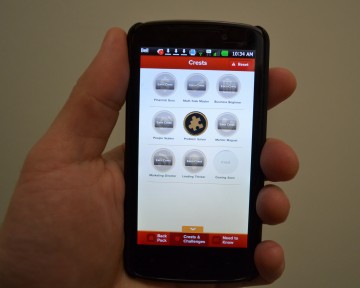 After a flashy video introduction, a main screen appears with three sections: “Back Pack,” “Crests and Challenges,” and “Need to Know.” The majority of the app’s interactive features are found in “Crests and Challenges,” where you answer a series of questions covering a certain area of owning a small business and play short games, such as a simple version of memory. As you progress through the challenges, you are awarded badges which then appear on your backpack (which you can customize to a purse or a briefcase in the “Back Pack” section, but I don’t know why you’d want to stick a bunch of golden badges on a briefcase). Finally, the “Need to Know” section, which appears as a stack of files on a desk, offers advice on the various aspects of running a business.

While Boss Yourself is an appealing concept, the actual amount of discussion on each aspect of running a business is very light. It only took me about 20 minutes to see every feature of the app. Also, the quizzes are not particularly challenging. I found the two types of games to be frivolous and annoying, especially the falling-symbol game, which didn’t react well to the touch-screen. Considering how little solid content is in this app, the current games should be abandoned in favour of other games where players could actually learn something useful, like what to do in a real-life business situation. After all, that’s why we bothered to download the app, isn’t it?

Apart from that, Boss Yourself could include more video content that inspires users by telling the stories of young entrepreneurs, and most obviously, add more helpful written content. For example, Boss Yourself’s intro video asks if you’re shy, then says not to worry, it can help, but it doesn’t offer any real advice for overcoming shyness, other than one sentence that tells you to work on your mingling skills.

If more useful content is being planned for Boss Yourself, (and that seems to be the case, according to a “Coming Soon” feature I noticed), this app may show some promise. If this is already a more-or-less finished product, it fails to deliver much in the way of information, and especially, inspiration. The most useful part of Boss Yourself is a link to this useful website: smallbusinessbc.ca. If you are interested in starting your own business, talk to them. After you’ve done that, find and interview some young entrepreneurs yourself; 20 minutes of talking to one of them would provide you with much more valuable information than 20 minutes spent looking at this app. Let’s hope future versions of Boss Yourself are much richer in content.