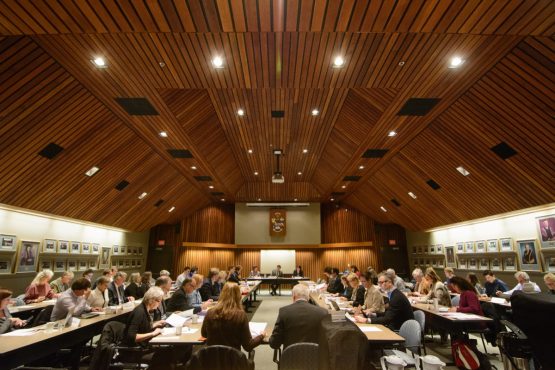 The first Friday of April brought members of the UVic Senate together to discuss the latest news for the final weeks of the 2017/18 spring term.

After a busy March that included students protesting over international tuition hikes and uproar over student senator attendance, the Senate had plenty to debrief.

UVic President Jamie Cassels started off the meeting by relaying a message to students and faculty in celebration of the last day of classes:

“Remarks from the chair, a few updates, but let me preface them by wishing all faculty, staff, and students — except for law school I think — a happy last day of classes and best wishes with exams and final papers.”

Cassels updated the Senate on the latest Board of Governors meeting, which saw the board ratify an expansion of student housing, an overhaul of the entire food services delivery operation, and a new balanced budget.

“Two weeks ago the Board of Governors met on March 26 and 27, and moved forward on a number of very, very important initiatives,” said Cassels. “And that as most of you will know did involve changes in tuition and fees including a fairly substantial increase in international undergraduate tuition. Which, understandably, was a matter of some debate, and some contention at the board, but nevertheless was passed.”

Cassels then highlighted that the latest increase brings UVic’s international tuition to just below the average of other Canadian universities across the country.

He then reinforced the idea that an increase in international tuition is necessary for UVic to meet it’s goal of providing students with sufficient resources, education, and support, giving UVic the tools to attract talented students to Vancouver Island.

“One goal is to develop the resources that are needed in order to invest in quality, and to provide the kind of education and service, support, and research that we know we are able to do. While at the same time, we’re committed to ensuring that we are able to attract the most talented and diverse group of both domestic and international students,” Cassels said. “A budget is an attempt to reconcile those goals.”

Next in his update, Cassels highlighted the collaboration between faculty and students for the successful impact that IdeaFest and Five Days of Action had on campus, and celebrated the $1-million donation from the Bank of Montreal to UVic in support of its ACE (Aboriginal Canadian Entrepreneurship) program. 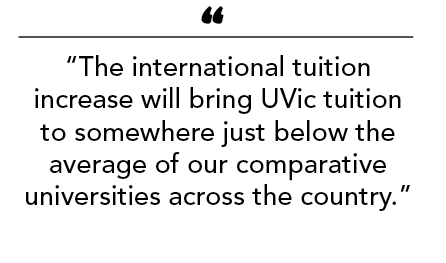 The big topic on the agenda for the Senate was a motion to recommend the Board of Governors approve the UVic Strategic Framework plan.

The Strategic Framework is a six-pronged plan which lists numerous priorities that the university has committed to, ranging from advancing research on campus to fostering respect and reconciliation with Indigenous peoples, to be completed between 2018–2023.

“At this time I am presenting to Senate the final draft of the Strategic Framework, with an accompanying motion that Senate recommends the framework to the Board of Governors for approval,” said Cassels.

The framework is broken down into six areas, formatted as commands for the university: cultivate an extraordinary academic environment;  advance research excellence and impact; intensify dynamic learning; foster respect and reconciliation; promote sustainable future; and engage locally and globally.

Each area has five strategies within it. The framework can be viewed online.

When Cassels asked the Senate for debate, or any questions about the framework, not a single member raised their hand, which Cassels pointed out.

“The process can be exhausting for everyone.” The Senate members burst into laughter. Senator Diane Popova responded: “I think everybody is silent because it’s really a good plan.”

Ultimately, the Senate approved the motion unanimously, and the Board of Governors will be asked to approve the final version of the framework in May, or in a special meeting before then.

Soft Launch in May

If approved, the Strategic Framework plan will be implemented through a soft launch in May, and will be in full effect for the September 2018 term.

There was some contention in the Senate Chambers towards the end the meeting, specifically around the role of Adjunct Professors and their membership in the Faculty of Graduate Studies (FGS).

The faculty had introduced a motion for the Senate to approve changes to their membership policy, but Senators were confused with how Adjunct Professors, who are non-tenured track faculty, would fit in with the conditions and nomination process of membership.

After the debate, the majority of the Senate decided to vote against the motion, and it failed.