Smart meters, which record electrical consumption and transmit the data to B.C. Hydro periodically, have been a contentious issue for some B.C. residents who feel they have been forced to install the wireless technology in their homes despite having concerns about unknown health and safety hazards, particularly from the electromagnetic radiation (EMR). Retired Canadian Armed Forces captain Jerry Flynn gave a presentation in Victoria on Feb. 20 about the dangers of long-term EMR exposure. 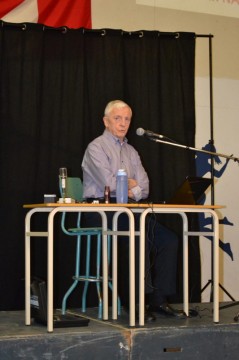 Flynn spent 22 years of his career specializing in electronic warfare and radio warfare. Presenting to a crowd of around 250 people in the St. Andrew’s Regional High School gym, he said he was compelled to come out of retirement after doing research on smart meters. All of what he presented can be found online from various sources; the research is not his own.

Much of the research on adverse health issues that stem from EMR is based on cell towers and cellphone use. There are currently no studies about the health impact of smart meters — a reason why some residents don’t want them.

Both the Coalition to Stop Smart Meters and the Citizens for Safe Technology organized the Flynn presentation. In an email to the Martlet, Victoria resident Sherry Ridout, who has signed a Citizens for Safe Technology petition, wrote, “I am not opposed to technology but feel we need to be cautious with new developments until we learn more about their accumulative affects on humans and the environment. We humans are quick to jump on the bandwagon only to find out after that a precautionary stance would have been better for all concerned.”

In 2011, the International Agency for Research on Cancer reported that radiofrequency electromagnetic fields are “possibly carcinogenic to humans” based on the increased risk for a type of brain cancer associated with cellphone use. This is the only such research acknowledged on the Health Canada website, which also states more studies on the topic are needed.

Since B.C. Hydro announced in 2010 that it would be making the switch to smart meters, opponents have been vocal.

“It is apparent that it is up to us, the public, to take action through educating ourselves, demanding action through our elected officials, refusing to buy dangerous wireless products and, finally, protests. This is too important for us to ignore any longer,” said Sharon Noble, the director for the Coalition to Stop Smart Meters.

B.C. Hydro has stated that 20 years of exposure to a smart meter is equivalent to 30 minutes of cellphone use. Conversely, Flynn cited statements by nuclear policy lecturer Daniel Hirsch of the University of California Santa Cruz, who has said some reports comparing cellphone use to smart meter exposure don’t use consistent units of measurement, so they don’t provide accurate results.

In January, B.C. Hydro announced that it would no longer be forcing the installation of smart meters on residents who do not consent to it. Ninety-five percent of residents in B.C. already have smart meters installed. Concerns about smart meters aren’t limited to the impacts of EMR exposure; people are also worried about protection of personal data, fire hazards, corporate conflicts of interest and billing problems, among other issues.

Ridout said she is “heartened” by this decision. “But that comes after installing them without consent on millions of home owners; many would have not consented if they knew anything about them and are now wondering how they can get them removed,” she wrote.