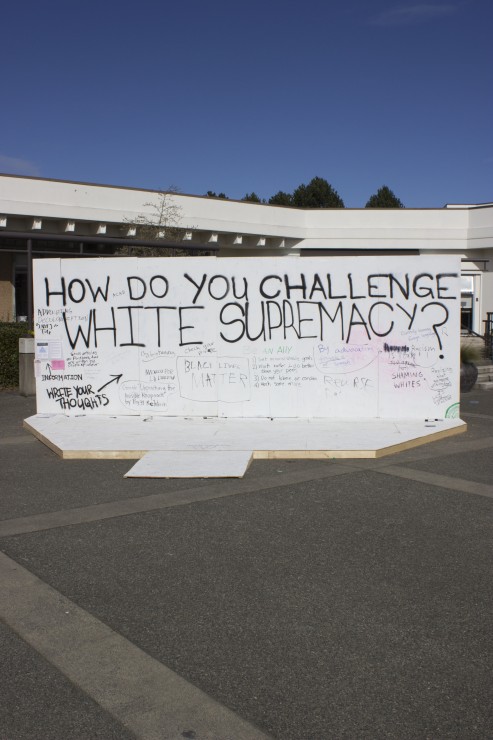 This second iteration of an art project put together by the Third Space drew a number of comments shortly after it was repainted Thursday afternoon. Photo by Myles Sauer, Editor-in-Chief

How UVic challenges white supremacy is a topic on everyone’s minds this week after an art installation put up by the Third Space sparked debate outside the SUB.

The project — a wall made of wood and painted completely white, spray-painted with the message “How do you challenge white supremacy?” — was put up on Wednesday, March 15, just across from the rainbow crosswalk at Ring Road.

The wall was left blank to allow passersby to write their own thoughts and responses, and by Thursday morning, it was covered in messages both constructive and destructive.

“Smash the patriarchy,” read one message. “White person tax 50¢ every time you say something is spicy,” read another. Others called for supporting Indigenous land rights and sovereignty, spreading awareness and education, and being not just non-racist but anti-racist.

Shaed had just repainted the wall when the Martlet spoke with her. “The intention was, once it got filled up to capacity, that we would paint it over,” she said. “We posed a question and want to give more people the opportunity to have that discussion.”

Perhaps unsurprisingly, not everyone was on board with the wall’s intent.

One student who requested to remain anonymous said the wall was “aggressive” and “offensive.”

“The underlying idea [of the wall] is that white supremacy is everywhere and is oppressing people all the time, and I just don’t think that it is,” they said.

“I think it would be a better tactic to approach it as a conversation,” they said, while several conversations about the wall continued around us.

Chris Ramsden, a Political Science student who wrote on the wall that reverse racism is real, said he supports the project, but that he also supports “free speech.”

“It’s our right to say whatever we want to on there,” Ramsden said. “I don’t support any of the awful things people want to say, but . . . [the organizers are] inviting it.”

“At least 80 per cent of the people I’ve talked to were against this wall in the first place,” he continued. “I support them putting [the wall] up if they want to, but a lot of people say they shouldn’t have done it. It hasn’t really achieved much.”

None of the response was particularly surprising for Shaed. “Some of the comments that I’ve noticed outline that denial of racialized experiences,” she said. “That just highlights that [white supremacy] does exist.” 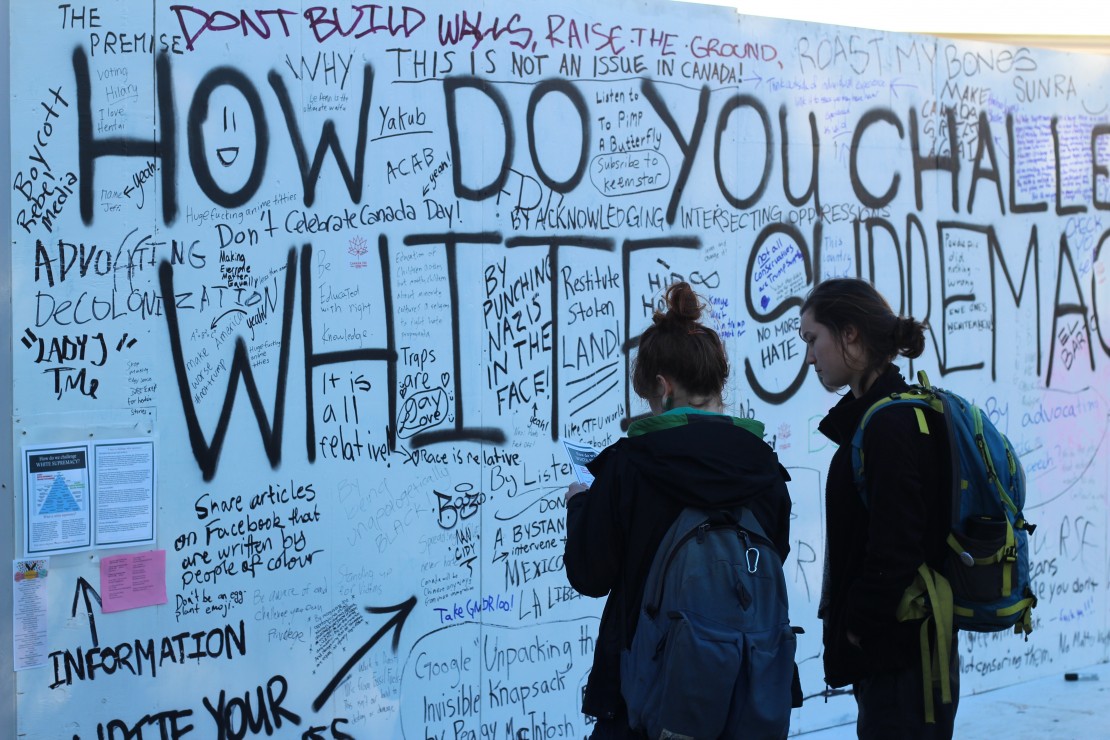 Many students have taken to social media to criticize the wall as well, with some saying that it cost $3 000 to build. The real cost, according to Shaed, isn’t nearly as extravagant.

“We had to reduce materials due to cost and therefore shorten the length of the wall,” Shaed said, citing a $1 000 budget the Third Space had to work with. “It was $1 045 for the materials, and there was three of us doing the construction, and one doing the painting.” She said the ones building the wall were being paid, and that it came out of their work study hours.

The wall was originally supposed to be up in time for Black History Month and Indigenous Resurgence Month, “but the bureaucracy of getting all the approvals . . . delayed our timeline,” Shaed said. The wall is planned to stay up for one month anyway, and she’s prepared to repaint it again when necessary.

“I expect it’s going to fill up again,” she said. “I got three gallons of white paint and I’m probably going to go through it . . . because it’s up for a month, theoretically.”

Shaed laughed. “Unless it gets burned down.”

UPDATE March 17, 11:32 p.m.: As of this morning, the wall has been painted over and cut off with tape. Photos show that UVic groundskeeping staff were the ones painting, but we have not yet confirmed who made the decision.

A tweet from early Friday morning shows a number of racist messages were written on the wall since Thursday afternoon. A swastika is faintly visible on the wall currently.

We’re waiting for comment from the UVSS and will update when we hear back.

This story is developing.