Astrocolor is coming to Victoria this Saturday night

The electronic music group spoke with the Martlet about live performances, recently-released album 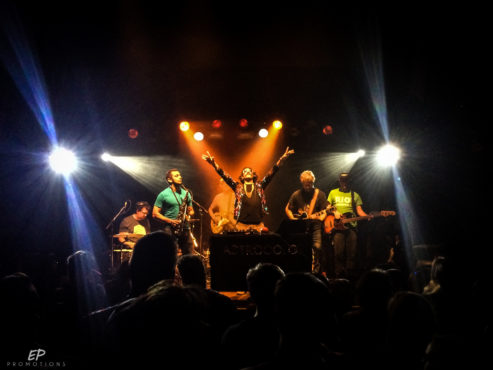 Photo by EP Promotions via www.astrocolormusic.com

As distracted Millenials and Gen Z-ers, we are constantly searching for the newest, edgiest thing that will make us feel like we’re ahead of the game — and this includes music. Victoria-based band Astrocolor might just have the chilled-out, funky dance beats you’re looking for. And this Saturday night, they’re coming home.

The group is only three years old, but they’ve come a long way. The Martlet spoke with frontman Neil Cooke-Dallin about the creation of the group, their music style, and their recently-released album.

“Astrocolor started out [as] a five-piece funk band — without me,” says Cooke-Dallin. “They were called Weird Party,” he says. They still play together as a jazz-funk band.

Cooke-Dallin met Weird Party when they came to record at his studio.

“We got along really well,” he says.

The album they recorded in Cooke-Dallin’s studio went on to be nominated for Best Instrumental at the Western Canadian Music Awards.

“Based on that,” he says, “they got a record deal with Last Gang [Records] and put out the Christmas record under the name Astrocolor.”

Then, on a weekend in March 2016 when the studio was free, Cooke-Dallin invited them to come in and record.

“I had been hearing these late 90s sounds come back,” says Cooke-Dallin.

He wanted to create some tracks in the style of Ninja Tune’s records and saw Astrocolor as an alternative to using tired funk samples. So he told the group to come in free of charge and have some fun.

Astrocolor was recently nominated for Electronic Artist of the Year at the 2018 Western Canadian Music Awards.

Using what they recorded that day, they sent some samples the label.

“The label loved it,” says Cooke-Dallin. “We ended up making an entire album and they invited me to formally join the band at that point. So that’s kind of how Astrocolor came to be what it is now.”

And the group seems to only be moving forward. They were recently nominated for Electronic Artist of the Year at the 2018 Western Canadian Music Awards, and have performed at high-profile festivals like Rifflandia and Burning Man.

“The way that we record is to [improvise] and lay down a bunch of stuff and then we go through and pick out the … golden moments and start making a new arrangement out of that,” says Cooke-Dallin.

They let the samples they’ve chosen determine where the song will go, rather than permanently aligning themselves with one genre.

Cooke-Dallin produced their most recent album, Astrocolor III, which was released in April 2018.

“The whole concept of the style of music that we’ve been making … has purposefully been to make music that sounds huge and danceable on a club system but also sounds dynamic and interesting enough that you could listen to it at a dinner party,” he says.

“We’re certainly not trying to hit a certain demographic. We’re first and foremost trying to make … really good music that keeps evolving for people and is listenable in lots of different environments.”

When it comes to live performances, Astrocolor is usually a full, six-piece band, although they sometimes play at venues that only have a DJ booth. In those cases, Cooke-Dallin plays tracks from the band and will have one or two live musicians perform with him if there’s room.

“We have this versatility [when we perform] live … of being able to move back and forth between electronic, traditional band, or the culmination of the two.”

When they do get to perform as a full band, Cooke-Dallin DJs.

“I’m working with mixes that I’ve created where I’ve removed some of the elements that the boys normally play and so they can fill them in live,” he says.

Then, if things are going well, he’ll loop a section and let the band improvise, and when it feels right, they’ll jump back into their regular songs.

“We have this versatility [when we perform] live … of being able to move back and forth between electronic, traditional band, or the culmination of the two.”

Astrocolor is performing at the Capital Ballroom in Victoria, B.C. on Saturday, Oct. 13 at 9 p.m. For tickets, visit their website at http://www.astrocolormusic.com/shows/