The saga of my water-damaged phone; a cautionary tale 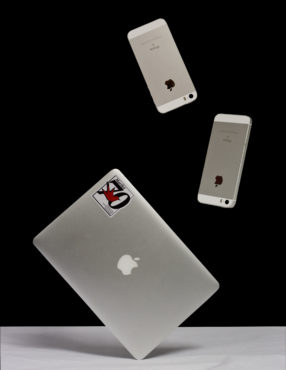 PART I: The Cursed Swim

So you dropped your iPhone in Cadboro Bay (we all know it actually fell in the toilet but we’ll let you have this one). Now what? You’ve shut it off, you’ve removed the SIM card, you’ve buried your phone in rice. That might work to remove the water from the phone, but it won’t fix the problem. Once an iPhone has been exposed to water, it’s unlikely that it can ever be fully repaired (or so said the anonymous Apple repair technician who refused an interview with me), because the water leaves behind minerals which corrode the inside of the phone.

If you’re lucky, you might still have the AppleCare coverage that the salesperson forced you to buy along with your iPhone all those years ago. The coverage can last for one or two years depending on which plan you bought, and includes screen repairs, hardware and software repairs, and replacements for damaged phones. Unfortunately, it turns out, not all replacement phones are created equal.

PART II: A glimmer of hope?

When I accidentally let my little angel go for a swim at the end of June, I immediately called Apple Support in a panic asking what to do about my soggy phone. I was fortunate enough to discover that I’d absentmindedly paid for the two year AppleCare plan and had exactly three months of coverage left. The Apple Support technician recommended that I back up my phone since it could still be turned on. Then, they made me an appointment with Apple Repair. Since there is no Apple store on Vancouver Island, I chose to take my phone to my nearest certified Apple Repair location.

My phone had chosen a bad weekend to go for a dive as it was the day before Canada Day, so I had to wait three days for my appointment. I spent that time researching the best ways to dry out an iPhone and what the repair might cost me. It turns out that liquid damage repair isn’t completely covered by AppleCare, but the repair or a replacement phone will only cost you $129 if you’re covered.

PART III: Attack of the franken-phones

At this point, it was all seeming a little too good to be true. After all, I had spent a lot more than $129 buying my iPhone 6s in 2016. So I decided to dig a little deeper to find out more about these replacement phones and why Apple would give out new phones for such low prices when you waterboard your old one beyond repair.

At the bottom of the iPhone Express Replacement Service page, they include a note in small italics that states “your replacement iPhone will be new or equivalent to new.” It turns out that the replacement phones can be new or they can be new-ish — the new-ish phones have at least one recycled part that was taken from a damaged phone. This means that some people get new phones for $129, and some people get franken-phones for $129. An Apple Support employee assured me that the franken-phones are put through extensive testing to ensure that they are up to  snuff, but I was still concerned. After reading many articles and forums, it became clear that while some people had no issues with their replacement phones, many were unimpressed with the function of their replacement device and blamed the recycled parts. There have even been a few court cases where people have sued Apple for giving them replacement devices that weren’t totally new.

My anxious mind kept coming back to the same question: would it be a good idea to trade in my phone that was wet—but that had no recycled parts—for one that could potentially have issues due to pre-used parts?

I brought my phone into London Drugs on the day of my appointment, naively hoping to just get it fixed and hoping to not have to worry about a replacement phone. The employee at the desk took my name, collected information about the incident ,and brought it over to the diagnostics station for an assessment. Surprisingly, all the parts that this diagnostics station assessed were still working at 100%. I was elated; the employee was shocked. She asked if I still wanted to sign it in for repairs. I wanted them to open it up and dry it out properly because I’d also read that corrosion is water’s dangerous partner in crime.

As we were signing my phone in for repair, a repair technician came out of the shop and stopped by the desk to ask what was wrong with my phone. We told him it was water damage but that it seemed to be okay, and that I still wanted it to be dried out. He stopped us immediately, letting me know that protocol with water damaged phones was always replacement. They aren’t even supposed to open phones that have been exposed to liquid, he said.

He said I was lucky that it was still working at all but that eventually, it would definitely fail due to the water damage. Since I only had a few more months of AppleCare, the repair technician recommended trading my iPhone in right away rather than waiting for it to fail.

After some back and forth, I decided to go for the replacement phone, and a few days later an employee called to let me know it had arrived.

The replacement phone did not come in a new iPhone box, but rather a thin, cardboard box with no images or writing other than a small sticker with the phone’s IMEI number and serial number. This immediately concerned me because a new iPhone always comes in that fancy Apple packaging. But the technician opened the box and switched my SIM card from the old phone and put it in the new one, the iPhone turned on normally and everything seemed fine, so I handed over the waterlogged light of my life and left with the replacement phone.

After about a day with my replacement phone, I started noticing that the battery would die really quickly and whenever I called someone, they said I sounded like I was underwater. Then, about a week later, a vertical white line showed up on the right half of the screen. I called Apple Support to ask what to do — as any good IT professional does, they of course asked if I’d tried restarting the phone. Despite not being an Apple technician, it had actually already occurred to me to try that. Their next suggestion was to do a factory reset. Neither suggestion worked, so they placed an order for me to get a replacement for my replacement phone. Yes, really.

When I went in to pick up Replacement 2.0, the iPhone came in the same imageless cardboard box, but it didn’t start up normally. When I tried turning it on, I kept getting an alert saying that it was running old software and that it wasn’t compatible with my SIM card or my recent iPhone backup. Naturally, I freaked out. How could Replacement 2.0 also not work? And how could a new iPhone be running old software? By then, the employee from London Drugs had moved on to another customer so I called Apple Support while I was standing in the store. The woman who answered tried to help, but she had never heard of a new iPhone acting like this. She recommended that I not take it if I couldn’t get it started.

Eventually, a repair technician walked by and realized that I was having trouble. He was able to update the phone through the computer and then restore my backup onto it. I was still unsure about Replacement 2.0, but after an hour and a half in London Drugs, I was ready to leave.

I’ve been with Replacement 2.0 for just over a month now. She has a dark vertical line down the right side of the screen that appeared as soon as I got the phone running, most of the time people can’t hear me during a call, and sometimes she enjoys taking pictures on her own for me to find and panic about later (because, you know, Black Mirror).

I can’t say for sure if recycled parts are to blame, but one Apple Support technician told me that his best guess is that when Apple releases a new iPhone, they set aside a certain number of new phones for replacements. By the time Apple has released a few new generations, the brand new replacements are likely used up. So both of my replacement iPhone 6s phones very likely had recycled parts. There are tons of articles boasting tips for finding out if your replacement phone is new or not, but according to most Apple Support workers, there is no way to tell definitively.

I spent hours on the phone with Apple Support this summer and I can’t do it anymore. Nobody at Apple Support would talk to me about the replacement phones and the use of recycled parts. I got hung up on, put on hold for hours, and heard the robotic line “there is no way to tell if an iPhone has recycled parts” so much that I now hear it in my nightmares. I’m going to hold out until I can upgrade my phone because at this point, I can’t see Replacement 3.0 being any better than either of its predecessors.

AppleCare is great if you crack your screen, need your battery replaced, or your charging cord disintegrates. But when it comes to water damage, the service isn’t all it’s cracked up to be. Take on Apple Support and the franken-phones at your own risk. You have been warned.