Author, broadcaster says the technology is available for a greener future, if we act now 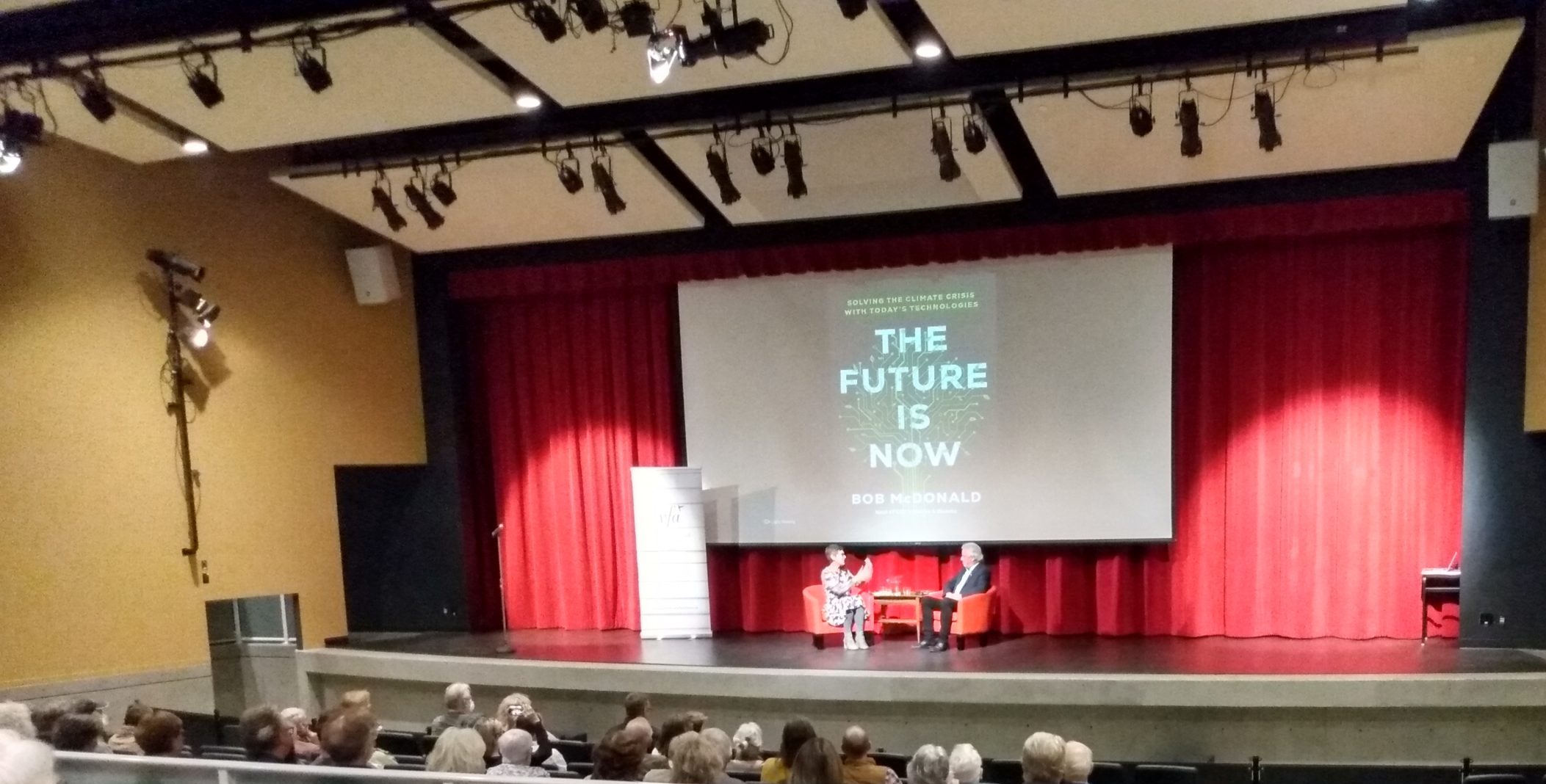 Following the release of his new book The Future is Now: Solving the Climate Crisis with Today’s Technologies, author Bob McDonald sat down with evidence-based hope researcher Dr. Elin Kelsey to discuss eco-anxiety and technology’s role in generating climate solutions. The talk rounded off a five-day series of Q and A’s, interviews, and readings from the seventh annual Victoria Festival of Authors.

McDonald is a renowned Canadian science journalist that’s shared his scientific knowledge with the public as a writer, broadcaster, and show host. He’s a regular contributor to The National and long-time host of a CBC radio show, Quirks and Quarks — a weekly digest of the latest developments within science and technology. He has also authored several books, including The Quirks & Quarks Question Book and An Earthling’s Guide to Space.

Now, for McDonald, the focus has shifted to just one planet, Earth, and the catastrophic crisis it faces.

“All the predictions about climate change are now here. They’ve come true,” McDonald told the Martlet in an interview following the show. “When I first started reporting on this back in the ’70s this was all in the future, but now it’s here. It seems to me that now the time is right to stop just pointing at problems and let’s look at solutions.”

Standing in front of an image of masked earth, McDonald reflected on our behavioural changes during the COVID-19 pandemic. The rapid alterations we made to our daily lives and the billions of dollars invested into research served as example of the momentum we can generate when faced with global crises. Why not apply this same momentum to climate change?

Discussing his approach to his new book, McDonald said, “As a journalist doing so many environmental stories, they’re all bad news and it gets you down after a while. So I wanted a positive take. It was just delightful for me, when I did research, to realize that the technology to go green already exists. So, I’m trying to put out a book that has a sense of hope. Yes we can engineer our way through this climate crisis, and let’s just get on with it and there it is.”

One of the biggest surprises of the evening was McDonald’s attitude towards the elephant in the room — the oil barrel. He is not afraid to say that oil and fossil fuels in general are “incredible.”. Building the great pyramids in Egypt, one of the wonders of the world, would require the energy generated by four hundred barrels of oil. That sounds like a vast quantity until McDonald explains that an oil well would put that out in just one day.

We rely on fossil fuels because they are energy dense. Yet, our burning of them causes massive planetary destruction. The Future is Now explores the alternatives. Solar, wind, geothermal, hydrogen and nuclear fusion, among others, are all discussed within the book’s chapters.

McDonald said that he interviewed many different experts in various fields who were all excited to talk about the newest improvements in the technologies they were working on. He said it was encouraging to talk to so many hopeful researchers.

“The wind person was talking about how much bigger they’re becoming, and how the blades of the wind turbines are now wings with the same material that airliners have, and they’re super efficient,” he said. “And they fly! They don’t just catch the wind like a flat blade used to do, they actually fly, and they’re putting out enormous amounts of power.”

Another inspiring innovation comes from the solar industry: perovskites.

“These new types of solar materials that are transparent,” McDonald explained. “The fact that we can coat windows and see through them, but they’re solar-voltaic. That’s great. They can be in so many different places, they can be in paint, they can be in the architecture of buildings.”

McDonald’s optimistic approach to the climate crisis feels refreshing. He advocated for students to become part of the climate conversation, inviting them to research climate change alternatives and “separate the science from the negativity and the misinformation that is out there.”

McDonald seems confident that young people can be an integral part of generating climate solutions.

“I’m always encouraged by the energy and the excitement that’s in labs. The students who are taking science: be creative, be innovative,” he said. “We need new ways of gathering energy that we haven’t even thought of yet, that excites me. Things that are in the minds of young students, that excites me.”