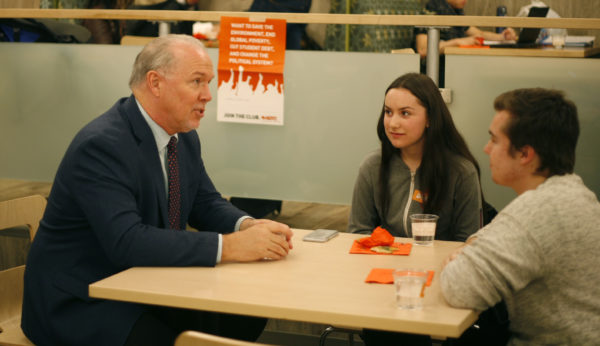 With the pungent political stew south of the border still bubbling away at high heat, it can be easy to forget that British Columbia’s provincial election is sitting on the back burner, waiting to be served up on May 9, 2017.

But at an open house on Thursday, Jan. 19, B.C. NDP leader John Horganand other MLAs sought to remind a healthy crowd of young Canadians at UVic that their province’s future is at stake.

Big money in politics was on everyone’s minds at the event, as earlier that week the B.C. Liberals prematurely released documentation of their 2016 political contributions (totalling over $12 million), a practice usually reserved for B.C. Elections whose reporting deadline is March 31. The Liberals also announced that they would begin reporting contributions to their party “in real time,” by revealing individual contributions within 10 business days of their deposit.

Horgan attacked the Liberals for the contents of those releases, which revealed that Christy Clark’s party is continuing to accept large corporate donations.

“When we looked through the $12 million in donations [to the Liberals], we discovered that fully six million, over one half of the money raised by the B.C. Liberals, came from 185 donors,” Horgan said in a speech to attendees. “The only tax reform that the Liberals have introduced in their time in government was a tax break for the top two per cent of wage earners.

Horgan also spoke briefly on underfunded public schools, student loans, and rising medical service premiums (MSPs), criticizing the Liberals for lacking an income-based MSP payment plan. “Whether you make $40 000 or $400 000, you pay the same amount. It’s a flat tax, it’s a regressive tax, and every other province in Canada funds their public healthcare system through progressive taxes. The more you make, the more you pay.”

Victoria-Swan Lake MLA Rob Fleming took the stage following Horgan, weaving a plea for small donations into a stirring speech comparing the current NDP movement to that of Mike Harcourt’s in the early ‘90s.

“When I was your age, the first time I could vote . . . we changed the government and we got rid of a rotten, corrupt, dinosaur, relic political party . . . it was called Social Credit,” said Fleming. “We got rid of those right wing, retrograde Tea-Party-type wackos from running this province.  And I think here, in the year 2017, you guys could be involved in a political project that could bring excitement and a better future for the province of B.C., and I implore you to get involved.”