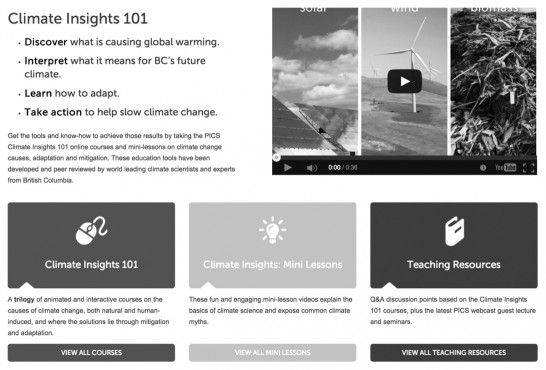 After four years in the making, the Pacific Institute for Climate Solutions (PICS) at UVic has released a free online course on understanding the science behind climate challenges. Started in 2010, the course debuted in thirds with the final section completed last month. Broken up into smaller courses on climate science basics, mitigation, and B.C. climate impacts and adaptation, the entire program is now free to view online.

Dr. Tom Pedersen, the executive director for PICS, described the course as the first of its kind. “These are the world’s first broad-reaching, lay language, free, online adapted courses on all aspects of the climate challenge. Here’s why it’s a problem, here what we can do about it, and here’s what we need to do in terms of the impacts and adaptation.”

The course started with an agreement with the provincial government that it would be mandatory training for all civil servants in B.C. While the deal with the government fell through, PICS continued the project in a new effort to reach a larger audience.

“[We’re hoping to achieve] climate science literacy for the general public” said Dr. Francis Zwiers of the Pacific Climate Impact Consortium (PCIC). Throughout the development of the project, PCIC has been working with PICS to provide raw data and material.

“The idea,” said Zwiers, “is to give a very accessible introduction to climate science so that  people can understand what the issues are, and to do so in a way that isn’t linked with any one particular agenda.”

Despite its recent completion, the program has already gained a significant amount of online attention. “The first course, climate science basics, has been seen by over 300 000 people in over 80 countries,” said Pedersen. “Parts of it have been translated into Finnish by request of the Finnish Meteorological Survey.”

While the content is all peer reviewed, Pedersen stressed that all the content is free of technical jargon and was designed to be accessible to anyone. Each 2–3 hour course is broken up into 3–4 minute segments and contains self-addressing questions, and Pedersen adds, “They’re pretty darn effective.”

Stressing the need for awareness, Pedersen stated, “It’s very important that the public and all students, all government officials, [and] every member of society globally understands the scale of what we’re facing and starts immediately acting to turn that around.”