Barrett leads Canada over China at basketball showcase in Victoria 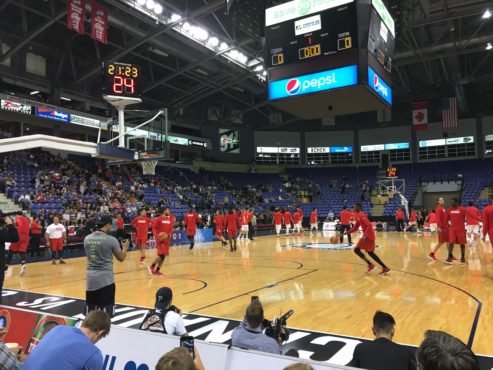 Both teams warm up before the pacific showdown that Canada ultimately won. Photo by Josh Kozelj, Staff Writer

Professional hoops returned for the second time this calendar year to Greater Victoria, as the Canadian men’s national team took on team China as part of the Pacific Rim Basketball Classic at Save-on-Foods Memorial Centre on June 24.

Since the NBA’s Toronto Raptors held an open scrimmage on the UVic campus in September, Victoria’s basketball fans have been starved for more. On Sunday, they were treated once more to some of Canada’s finest young talent.

NBA stars like Kamloops B.C. native Kelly Olynk of the Miami Heat didn’t enter the game, and the Memphis Grizzlies’ Dillon Brooks played very little, but that didn’t stop the crowd from delivering raucous applause for the next up-and-coming Canadian superstar R.J. Barrett.

In a 108–72 rout over the Chinese national team, Barrett was named Player Of the Game with a game high 21 points and five assists in 23 minutes of playtime.

“I think he’s been very active . . . for such a young kid,” says Canadian Head Coach Jay Triano, who spent time as the Phoenix Suns’ interim Head Coach this season before taking the Lead Assistant Coach position with the Charlotte Hornets in May.

After Canada took the opening game of the showcase 97–62 in Vancouver on June 22, a game which saw tempers flare between both teams as Chinese Head Coach Feng Du and Canada’s Anthony Bennett were ejected, the feisty play carried over to Vancouver Island.

The Chinese National team attempted to get physical with Barrett in the first quarter, but the Mississauga native was unfazed — much to the delight of his head coach.

“I think any time you play a team twice in a row, when you beat them in one building they’re going to come back, they got a lot of pride, and it’s going to get physical,” Triano says. “He can take the hit, finish at times, it doesn’t bother him. He’s got great focus.”

There have been a number of Canadian talents who, in recent years, have begun to take the NBA by storm. Bennett became the first Canadian selected as number one overall in the 2013 NBA draft, and one year later the Cleveland Cavaliers made Toronto’s Andrew Wiggins the first overall pick in the 2014 Draft.

The American publicity began for Wiggins before he even stepped foot on the court at the University of Kansas, appearing on the cover of Sports Illustrated when he was just 18.

But neither Wiggins, who later would be voted as the NBA’s 2015 Rookie of the Year, nor Bennett have attracted as much hype and adulation as Barrett.

U.S. media outlet The Ringer has already asked the question, “Is R.J. Barrett the Greatest Canadian Basketball Prospect Ever?” in an article last July after Barrett led team Canada’s Under-19 team to the World Championship gold medal (a run that included stunning team U.S.A in the semi-finals).

In that tournament’s penultimate game, Barrett lead team Canada over the United States with 38 points and 13 rebounds. He was named as the International Basketball Federation (FIBA) U19 World Championship MVP — and two years younger than most of his competition.

Barrett, who committed to Duke University in the fall, is projected to be the number one pick in next June’s NBA draft, provided he leave school early after his freshman season.

Despite all the attention, the future Blue Devil has maintained a steady head on his shoulders, and still relishes the opportunity to play for Canada at the international level.

“I try to represent my country every year if I can, and definitely thankful that I got this opportunity,” Barrett says. “For me, if my country needs me and I’m available, then I’ll be there.”

After sweeping team China in the Pacific Rim Basketball Classic, Barrett and team Canada will shift their focus to the 2019 FIBA World Cup qualifying matches in Toronto and Ottawa.

The last time Canada qualified for the World Cup was in 2010. The next round of qualification will continue in September.