Belfry’s ‘A Christmas Carol’ hits all the right notes 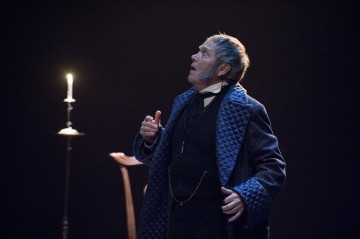 The Belfry’s A Christmas Carol encapsulates the true feelings of Christmas, of which there are many. The ensemble cast of 14 whisks audience members through a myriad of emotions felt during the festive time, including the usual suspects of love, friendship and hope, but also loneliness and grief. Don’t fret — those sad holiday feelings linger only momentarily on stage before drifting away like the Ghost of Christmas Past.

Director Michael Shamata makes sure the audience knows A Christmas Carol is a ghst story. His version of Charles Dickens’s classic tale begins with a direct address to the audience. Gerry Mackay (who later portrays Jacob Marley and the Ghosts of Christmas Past, Present and Yet-to-Come) shares an old theatre tale with the audience, which indirectly affects the passage Ebenezer Scrooge is about take. It’s fitting the production begins with an emphasis on theatre, as the next two hours are filled with the very wonders that make stage performances so loved.

There’s an incredible moment of set design ingenuity early on, as a tablecloth is whisked straight from an actor’s hands, as if vanishing into thin air (in fact, it is hoisted to the ceiling).

The costumes are rich and incredibly varied. Every actor goes through multiple outfits, each dress or dinner jacket as magnificent as the last.

A choreographed dance number during a visit to a Christmas past at Mr. Fezziwig’s had the entire audience swaying to the music. I had the slightest urge to jump from my seat and join in, despite my dance moves being a few centuries ahead.

Those feelings of loneliness and grief arise unexpectedly. Tom McBeath, who plays Scrooge, creates such sympathy for the character that you may just shed a tear (or two). Even with a large cast, some roles are doubled up on. Simeon Sanford Blades plays both the childhood Scrooge and Tiny Tim. It’s for this reason that extra sympathy is elicited. As Tiny Tim lies dead on stage, a part of Scrooge also dies.

With the melancholia lurking about, sharp wit and an occasional interjection of humour within the dialogue was always well received by the audience. Scrooge’s outburst that love is the one thing more ridiculous than Christmas allowed for both chuckles and introspection.

Without revealing all of Shamata’s creative liberties with the material, I quite enjoyed the addition of two new characters that provide a deeper glimpse into the ghost world.

As the story concludes, the significance of Scrooge’s voyage is not forgotten. We’re reminded Christmas is a time when “want is keenly felt and abundance rejoices.”

While the story is familiar, the presentation stays fresh. ‘Tis the season for theatre, and A Christmas Carol shouldn’t be missed.

Tickets: $25–$40 (less 25 per cent for students, except for Friday and Saturday evening performances)

On now until December 22