The best ways to maximize the UVic text alert function 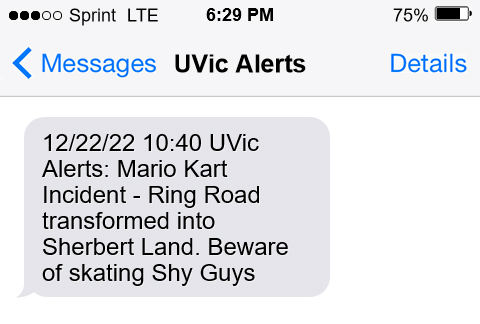 By now, we should all be accustomed to the UVic Alert system which notifies us of incidents occurring on or near campus. This past semester we’ve had a couple different instances of the alerts buzzing our phones, but I believe that number should have been higher. In this article, I will show that there are some humorous incidents we should have been alerted to.

Firstly, we should talk about the mobs outside clusters. From what I’ve heard those crowds have been rowdy; blasting music, drinking alcohol, and smoking weed. I would love to get a reminder each week of these weekend bashes. It would help out a lot of students who don’t have plans on a Saturday night and don’t know where to go, to have a notification saying, “Hundreds of students are gathered outside Cluster 51.” If they really wanted to be specific, they could also mention if Campus Security has made everyone dump their drinks yet.

The next incident that should’ve been reported is the person pooping in the David Turpin urinals. While I am typically against defecations making news, this is an exception for two reasons: A) we could all help keep an eye out for this guy immediately after it has happened – just think of all the campus-dwellers who are already poised with cameras out trying to get a selfie – and B) the janitors could get control over UVic Alerts. Imagine having an alert go out saying that stalls 1–4 are all clogged in the basement washrooms of the Library. That would save many of us from opening up a stall door and finding a sight that will haunt our use of public restrooms for eternity.

I do think that the UVic community is above snitching to Campus Security on this matter, but it would be amazing if UVic put an increasing bounty on the DTB Urinalbomber. We could get a John Wick: Chapter 2-esque text every morning, with an updated description and the full payment of your tuition as a reward for information, especially since the Mad Pooper is just a myth that UVic takes seriously.

Finally, there should be no argument to UVic Alerts reporting incidents of food running out or being restocked. With food options on campus so spread out, it really sucks to go to Mac’s looking for sushi only to find out they don’t have any, and then trekking all the way to Mystic Market in the hopes that there’s some left. This goes especially for the Starbucks on campus. I would very much like to know when there are cinnamon coffee cakes and when there are not. Long gone would be the wasted minutes of having to think of another treat I want, as well as the shame of waiting in the longest line on campus for nothing.

I think these new reasons for alerts should be implemented in the New Year. It would benefit the student body greatly to know when and where the parties are, which bathrooms to avoid, and where to find the food they want.

My next UVic Alerts mission is to find out when the next test is, and encourage all of you to place your phones on the ground to see if we can create an earthquake big enough to be recorded by a seismometer.