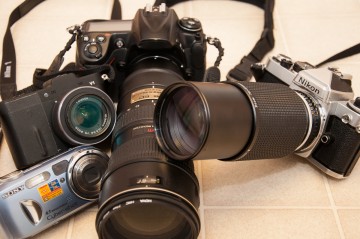 It’s no secret that I’ve made a substantial investment in photo gear, and I know it can seem wasteful and unnecessary. I often wish I didn’t have all this stuff, and if I were to outline exactly what I had to some angry forum posters online, I’d probably be accused of using this equipment to solve problems I could have solved with a little ingenuity. After all, it’s not the camera, it’s the photographer, right? This is true, but sometimes people take this out of context and expect that any camera can dependably take any photo at any time with enough skill.

When I’m not photographing for the Martlet, I’m a part-time employee at a camera dealer, and when I ask customers what kind of pictures they want to take with their potential camera, they invariably say, “Everything.” I try to remind them that a Swiss Army knife can’t build a house, but getting over this simple hurdle can be a trying experience. A digital SLR camera with interchangeable lenses is the standard for photojournalists who need maximum flexibility regardless of their situation, but they’re heavy, expensive and have a steep learning curve. The best professional cameras respond so quickly they twitch in your hand, firing ten shots with a light brush of the shutter release, but they’re definitely not discreet. If I carry two bulky cameras and a bag of lenses with me, it immediately marks me as a photographer, and I get stares.

Conversely, a smaller camera allows me to slip in and out of a situation without being noticed, but the inferior lens selection, slower response time and grainier image means I often miss the moments I could have otherwise captured with my larger camera.

Since I have to crank out a printable image after each assignment, I can’t afford the compromises, so I have all kinds of cameras for different reasons. Understandably, most people are unwilling to sink a lot of money into what would likely be a hobby for them, and that’s absolutely fine, but to expect the moon from a $150 point-and-shoot is a little ridiculous.

The mantra “it’s not the gear, it’s the photographer” is an oft-repeated reaction to the excess of modern digital photography, and there is truth to this. The instant feedback of a digital camera has made anyone with a dSLR look like a pro, and there are many bad photographers out there who just look the part because of their stuff (a hilarious scene from Judge Joe Brown’s courtroom involving a bad wedding photographer comes to mind). Still, if I gave a Sports Illustrated shooter like Bill Frakes an iPhone, he could never reliably capture the kind of photo that they run on the cover each week. This does not mean that an iPhone cannot capture something beautiful and meaningful. If Bill Frakes had only an iPhone to shoot an SI cover, I’m sure he would come up with something cool and different, but it wouldn’t be a tack-sharp close-up of a major league swing.

This is not to say that a camera phone should be ignored in favour of a “real” camera; it just has different strengths. It’s a camera that’s there all the time, and it’s discreet. A camera phone is perfect for human moments, close-up subjects and outdoor situations. It was the tool of choice for New York Times photographer Damon Winter while he was embedded in Afghanistan, though it stirred up controversy when he won a prestigious prize for his photos, which were edited with the Hipstamatic app.

It’s not just a choice between different digital cameras, though. I shoot film on my used $40 Nikon EM all the time, and I love it. The limitations and the frustrations push me to be a better photographer because my mistakes cost money. I can’t afford to make mistakes because film is expensive and I only have 36 exposures to tell my story. I don’t have an LCD to tell me what to fix. I’m slowing down and making each frame count, and what I learn through film I apply to my digital work.

Not everyone needs two dSLRs and five lenses, and if I didn’t need them for work, I wouldn’t either. Sometimes, though, the flexibility is what’s key. Just recently I shot a studio portrait, a basketball game and a lecture all in one day using the same camera. My Nikon V1, as capable as it is, could never go from one assignment to the next like that. However, if I had dinner with friends the same night, you can bet that I’d bring something smaller. After all, picking up groceries in a Ferrari is all well and good, but it still can’t clear a speed bump.