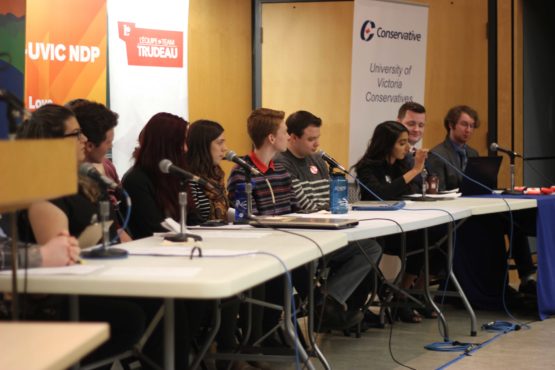 Karina Dhillon speaks at the latest Clash of Clubs, a political debate for students. Photo by Cormac O’Brien, Editor-in-Chief

Despite not having a single Bloc-Québécois representative in B.C.’s Provincial legislature, the French sovereignty party made their presence felt at the latest Clash of the Clubs debate.

The debate revolved around three key topics of discussion: trade, energy, and security. Each club was allotted two minutes to promote their respective platform on the ideas.

Only after the parties had delivered their opening addresses were the clubs allowed to question each other about their policies.

The numerous jabs and zingers shouted across the table received plenty of reaction from the crowd in the half-filled auditorium, which had to be quieted down multiple times by Dr. Daniel Westlake, who mediated the event.

The opening statement from the Bloc-Québécois, surprisingly, earned a rowdy ovation from the audience.

“The Bloc-Québécois is a party founded upon the goal of trade agreements, primarily that of a trade agreement between a sovereign Quebec and Canada,” club member Pierre-Paul Angelblazer said. “This would also mean that Quebec would have the right to trade with whom they want, in a way that reflects Quebec’s values, and not the phony values of federalist parties.”

“Liberté is more than a yogurt brand.”

The other clubs comparatively restrained themselves in their opening statements, mainly outlining their policies. Notably, the Communist Party suggested a free and democratic control of trade, highlighting the idea of withdrawing from trade agreements, such as NAFTA and the Trans-Pacific Partnership (TPP), to loosen capitalist pressure.

The Communists doubled down on this take when they questioned the Conservative advocation of free trade, which resulted in plenty of hooting and hollering from the crowd.

“Your party claims that signing trade deals is good for Canadians, that it ‘opens up new markets to Canadian businesses and workers,’” one Communist club member said. “In what way does signing away the democratic control and sovereignty of our economy benefit Canadian workers?”

The Conservatives reiterated the benefits of free trade, from creating new jobs and access to new technologies across the world, and took their own shot at the Communists.

“Free trade is fantastic for us, it’s a net benefit for everyone in general. I don’t see how the Communists can think that free trade is such a terrible idea,” Conservative Club member Sean Quartermaine said. “But then again, they would, because if we all starve together then we’re equal.”

On the topic of security, the NDP took centre stage, making swipes at both the Conservative and Liberal Parties.

“Who do you trust to rebuild Canada’s image both at home and abroad?” asked one NDP member. “The Conservatives tarnished our image on the international stage for almost a decade.

“While the Liberals campaigned on repairing our image, they have failed,” he continued. “Justin Trudeau has signed billions of dollars in weapons to homophobic, authoritarian regimes, and has actually made Canada the second biggest seller of arms to the Middle East.”

Throughout the evening, the one constant was the Bloc-Québécois’ mentions of sovereignty —  tying it into almost every response.

In one direct question from the NDP about the Bloc’s plan for updating outdated weaponry for Canadian soldiers, Angelblazer replied, “Canadian soldiers, oh. So, the Bloc-Québécois doesn’t really have an agenda on security, simply for the fact that we do not know until Quebec is a free sovereign nation. Security of other people? We don’t care as much.”

The Greens and Liberals avoided taking direct shots at other clubs during the night, opting for a more professional approach of stating their respective agendas and policies. The Greens maintained their desire for environmental stability, and the Liberal Party representatives referenced Prime Minister Justin Trudeau’s gender-balanced cabinet and plans to legalize marijuana later this year.

To end the night, during their concluding statement, the Bloc circled back to their desire for sovereignty, much to the delight of the UVic crowd.

“Liberté is more than a yogurt brand,” concluded Angelblazer. “Liberté is a feeling in the soul of every Quebecer. ”