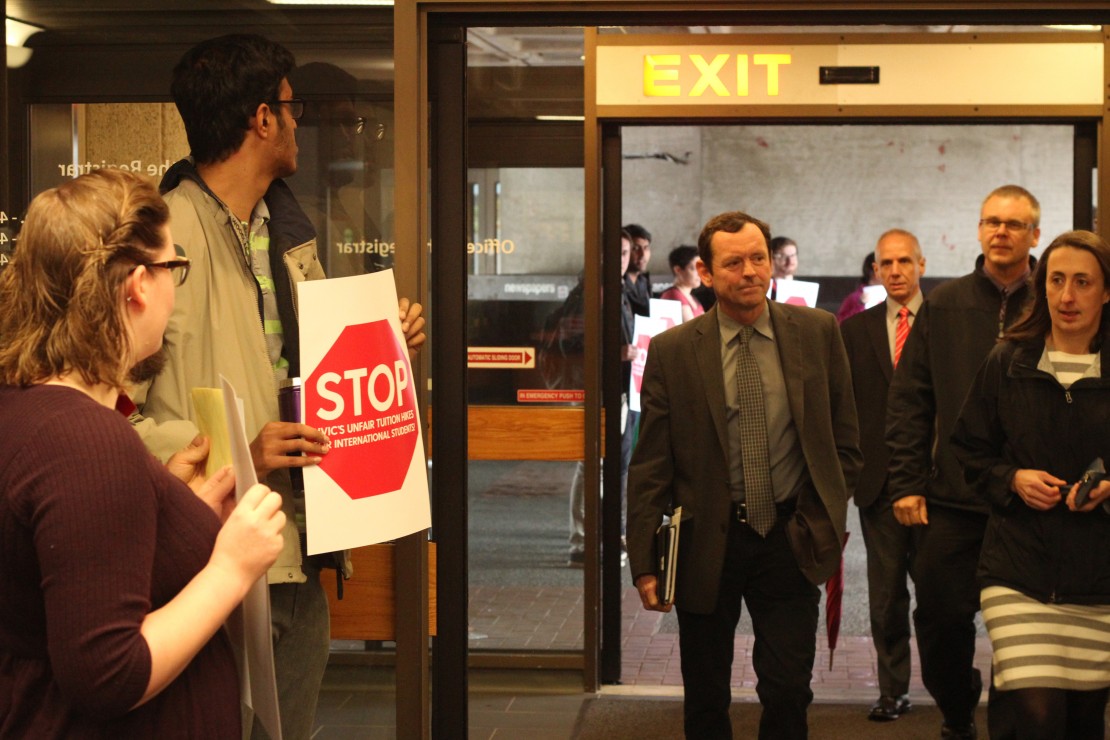 UVic President Jamie Cassels heads into the Board of Governors meeting Tuesday morning as protesters stand by with signs. The board voted in favour of implementing a four per cent increase to international student fees despite student opposition. Photo by Myles Sauer, Editor-in-Chief

The UVic Board of Governors (BoG) has voted in favour of increasing international student tuition fees by four per cent effective May 1, 2017, during open session at their meeting on Tuesday, March 28.

The increase is part of the university’s overall planning and budget framework, which outlines UVic’s financial priorities and funding allocations for the coming year. The fee increase proposal was met with protest from undergraduate and graduate students alike, both of whom attended the meeting.

Students filled the waiting area outside the Senate and Board Chambers within the University Centre, prepared for the board’s arrival with signs that read “Stop UVic’s unfair tuition hikes for international students.”

The board was largely silent as it filed into the senate chambers, though UVic President Jamie Cassels told the protesters “we hear your concerns” as he walked past.

Alysha Flipse, UVSS director of outreach and university relations, said the UVSS tried to mobilize students to oppose what she called an “unfair hike.”

“I hope [the board] votes no to the increase,” she said. “I think they should keep it at two per cent with domestic students.”

As we reported on Monday, the increase in tuition is supposed to address the actual inflationary costs of the university, which UVic estimated to be approximately $10.3 million annually, according to documents circulated to the board. The proposal effectively decouples domestic and international student fees, increases to which were previously both capped at two per cent per year.

After a call to order, Cassels addressed the board and the gallery, which was filled to capacity. Cassels said all budgets represent an attempt at balancing competing objectives and values, and that sometimes hard choices have to be made.

University resources are highly constrained across Canada, Cassels said, “and so choices are constrained and difficult. Given our reduced grants and capped tuition, the reality is that the annual costs driven by inflation tend to increase at a rate that’s greater than any increase in revenue. That obviously is a significant constraint on choice and makes those efforts to find balance particularly important.”

When it came time to discuss the motion to approve the budget framework, student governor Sara Maya Bhandar voiced her opposition, saying that the university didn’t do enough to consult with students prior to making its decision to increase fees. “We need to do better when we communicate with the student body.”

Bhandar said that the current framework’s approach to fees sets a trend, and that “this motion does not exist in a bubble.” She also tweeted her full remarks to the board earlier today (included below).

Ben Lukenchuk, student governor, said the board received 68 pieces of correspondence regarding the tuition increases that need to be considered. He also questioned if certain measures included in the budget framework “are the best course.”

Only one other governor, Dr. Ana Maria Peredo, said she would not support the motion.

With only three votes against, the motion was passed. Some gallery members booed before filing out of the meeting.

After the meeting, UVSS Director of International Student Relations Tianyang Zhang told the Martlet that the university’s decision would make things harder for low-income students. “They’re trying to make lower income [students] give them more [money]. But because students have low income, we’re trying to fight for our lives. And they’re trying to make our lives harder.”

Noa Hacohen, an international graduate student who formerly worked with the Graduate Students’ Society, said the goal was to make sure the board saw students’ opposition, regardless of the vote’s outcome.

“We really tried to make a difference here today,” Hacohen said. “I didn’t really believe that this vote was not going to go through, because we knew the Board of Governors came ready with a decision, but we wanted to show them that students care, and that this is a slippery road.”

“Once they vote on decoupling and deregulating fees, we can never know what will happen next year,” she said.

Hacohen is in her third year of her M.Sc, and said she had to start her thesis from scratch after switching supervisors when her first one ran out of funding. “I can’t really afford any increase in tuition.”

Her final thought was blunt: “UVic is not doing enough to show international students that it wants them here.”

“[International students are] already invested, and moved their lives here,” she said. “They’re halfway across the world from their families, they have no one to support them, and now you’re changing the ways of the game? This is not the Canadian way.”

Correction: A previous version of this article mistakenly reported Hacohen as working on her MA; she is actually working on her Master of Science. Her quote was also corrected for a misprint. We regret both the errors.

Update March 29, 10:43 a.m.: We added a clarification to the end of Cassels’ comments regarding increased bursary funding to include the figure of $50 000.