Board of Governors approves budget, 20% hike for incoming international students 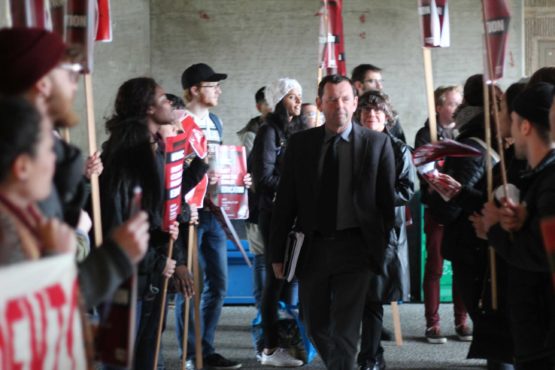 Ignoring the shouting from the 50 or 60 students gathered outside the University Centre and eventually inside the Senate Chambers, the UVic Board of Governors passed their 2018–2019 budget which included a 20 per cent tuition hike for incoming international students.

Only three people did not vote yes. Both David Eso, graduate student representative on the board, and Kasari Govender abstained from the motion, saying they took issue with the 20 per cent hike but approved the budget otherwise.

Kate Fairley, undergraduate student representative, was the only no vote. 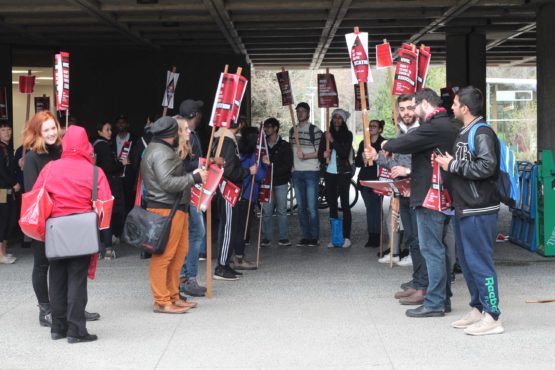 Students gather outside the Senate Chambers to protest the budget. Photo by Cormac O’Brien, Editor-in-Chief

The budget passed by a margin that was comfortable, but the shouting and booing in the room was anything but. Gayle Gorrill, Vice-President of Finance and Operations at UVic, spoke after the meeting about the intense environment.

“I really appreciate that those students aren’t doing it because they’re nasty, they’re doing it because they believe in something. And we’re at a university! That’s what we do,” Gorrill said. “I think with anything where it’s a challenge you have to go, ‘OK, are we doing the right thing?’ And if we’re doing the right thing then you try and continue to do it the best you can.”

Fairley said being the only “no” vote was an intimidating experience, and that she understood why others might abstain.

Fairley also reiterated the concerns of many students who said the hike took them by surprise, but Gorrill didn’t understand their shock.

“We’re certainly hearing people say that they were surprised, [but] it’s something that we’ve been looking at for two years. We may not have used the 20 per cent . . . ”

“ . . . but we certainly talked about rates comparable to SFU.

“So, if someone had done the math,” she continued, “then they would have said, ‘OK, that’s where it is.'”

Students (some perhaps skipping their math classes) arrived to the Senate chambers 30 minutes before the Board of Governors meeting began, setting themselves up to form a corridor leading into the chambers. Anmol Swaich, Director of Campaigns and Community Relations with the University of Victoria Students’ Society (UVSS), and Susan Kim, Chair of the Graduate Students’ Society (GSS), organized the crowd, providing them with signs and chants.

“Students united will never be defeated!” they cried, switching to “Hey hey, ho ho, Board of Governors, vote no!” when members of the board made their way into the meeting.

UVic President Jamie Cassels and the rest of the board smiled politely as they made their way through protesters, ignoring the boos and cries of “shame!” levied at them.

Forty protesters packed the senate chambers, while others watched a glitchy livestream from the Welcome Centre. 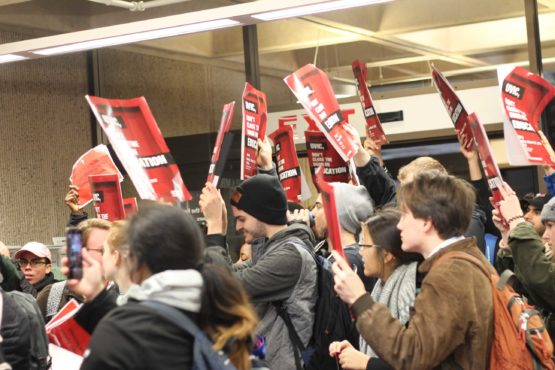 Students gather just outside the Senate Chambers, waiting to be let in. Photo by Cormac O’Brien, Editor-in-Chief

In her opening remarks, Board of Governors Chair Daphne Corbett addressed the protesters.

“I’d like to welcome our guests this morning,” Corbett said. “These decisions are not easy, and are never taken lightly.

“However,” she continued, “at the end of the day, we must make difficult decisions based on recognizing the financial constraints that we operate under and making sure that we do our fiduciary duty as board members to act in the best interest of the university as a whole.”

Gorrill and Valerie Kuehne, UVic Provost, presented the budget to the chamber. Students were silent to begin with, but mentions of the 20 per cent hike were met with shouts and boos. The mention of words like “diversity” and “equity” even elicited fake laughter from students.

Eventually, board members were asked to discuss and vote on the budget, prompting students to stand up and hold their signs in the air. Both Kasari Govender and David Eso said they would abstain from voting — their concerns about the tuition hike meant they could not vote on the budget, but the important work done in the budget meant it needed to pass.

Kate Fairley spoke most strongly against the budget.

Merle Alexander spoke next, but his speech was interrupted by students. Chair Daphne Corbett attempted to regain control of the meeting.

“Please show some respect,” she demanded.

“Why don’t you?” the room shouted back.

After final words from faculty-appointed member Peter Driessen, the motion went to a vote. With only one “no” vote from Fairley, and the two abstentions from Eso and Govender, the budget passed.

With that, students began to file out of the room, though some stayed longer than others to admonish the board.

“You should be fucking ashamed,” one student said.

The students took their signs and headed back out the way they came. Where they’d stood just an hour earlier, cheering and jeering mightily, vowing to fight the university on the proposed raises, they now stood murmuring and muttering amongst themselves.

All they could do was think about the ramifications of the budget, and reckon with the fears they felt before the meeting started.