Autism and Neurodiversity in Universities

If you look at how autism is portrayed in the popular media, you might be forgiven for assuming that autistic kids never grow up to be adults. However, I am an autistic adult who is just now graduating from UVic, and I can assure you that autistic kids do grow up. In fact, many of us try to study at post-secondary institutions — we just aren’t always successful.

There are many reasons why autistic adults struggle in post-secondsary environments. Our world was built by typically-developing people, and it can be a strange and stressful place for autistic people.

For example, autistic people often have unusual sensory experiences, which can make being in a crowded hallway or a room with the wrong sort of lighting a distressing or painful experience. My sensory sensitivities used to cause me immense stress every day, and huge portions of our world became inaccessible to me. I couldn’t walk in crowded hallways, eat out, visit busy shopping centres; the list goes on. I certainly couldn’t have tolerated, for example, the busy corridors of the Student Union Building. I was fortunate enough that my sensory sensitivities became less severe over time, but other autistic students in post-secondary settings may still struggle with these sensitivities on a daily basis.

Other barriers encountered by autistic students can actually be quite similar to the challenges faced by typically developing students, but for autistic students, these same challenges can be much more intense. One of the most difficult obstacles that autistic students face in the transition to university is the lack of structure and guidance. Even typically developing students are sometimes startled by universities’ expectation that students will manage their time independently, but those of us on the autism spectrum, regardless of our intelligence, may have extra difficulty with these executive-function tasks.

In the long run, it actually doesn’t help that many of us receive extra support in high school, beyond what our typically developing peers receive. It’s very easy for us to become dependent on these extra supports, so that we find ourselves cast adrift when we enter adulthood.

“There’s a saying circulating in the autism community: transition to adulthood is like falling of a cliff.”

Furthermore, researchers and self-advocates are increasingly becoming aware that autism can be associated with poor mental health — and this is hardly surprising. During our years in middle school and high school, many of us face systematic bullying and isolation which can leave us anxious, depressed, or both. This, in addition to the other challenges we face, dramatically increases the stress we can experience on a daily basis. Thus, while both autistic students and typically developing students struggle with mental health, autistic students may be at a greatly increased risk.

I could also speak to the additional challenges faced by those autistic students who have to move to a new town in order to complete post-secondary studies. Because the world can be a strange, threatening place for us, we need time to learn to navigate our environments and become comfortable with them. An abrupt transition to living independently, in an unfamiliar environment, can be a recipe for disaster.

In fact, unfamiliarity is a major part of the struggles of all autistic individuals transitioning to adulthood. In that transition, we must learn to navigate unfamiliar environments with unfamiliar expectations, and when we do that, we need support more than ever. However, that’s precisely when those childhood supports that we’ve become dependent on disappear. There’s a saying circulating in the autism community: transition to adulthood is like falling off a cliff.

We have no reason to think outcomes in Canada are any better. In fact, according to Canada’s National Autism Needs Assessment, post-secondary services are one of the most important areas of need for autistic self-advocates in British Columbia.

Right now, universities can do a good job helping autistic students with things directly related to academics: increased time on tests, for example. But our institutions don’t give autistic students the support that we need to complete our transitions. More can be done — for example, York University and SFU have invested in peer mentorship programs for their autistic students — but such initiatives have not been widely adopted. 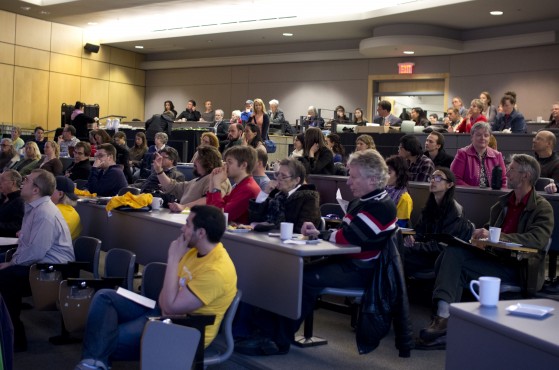 A photo from the 2013 Autism’s Own conference. Photo provided by Patrick Dwyer

The University of Victoria actually hosts a community of autistic students and other autistic adults from the community at large. On Saturday, June 24, we will be hosting the fifth annual Autism’s Own Conference in Vertigo between 11:00 a.m. and 3:30 p.m. Our interactive panel discussions can give you an opportunity to hear autistic adults speaking with their own voices, rather than hearing others speaking on our behalf.

Adults with autism may be struggling today, but we are ready to participate in and contribute to society. Our university campuses were designed by and for typically developing students, and so it’s crucial that our universities, and those studying at them, reach out and accept adults with autism for our unique minds.

For more information about the 2017 Autism’s Own Conference, visit the Facebook event page. The event is free of any charge.