‘Bring It On’ is just a movie, but cheerleading is the real deal 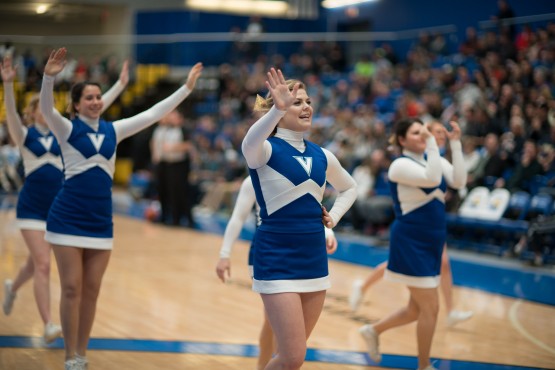 Don’t tell anyone, but I used to be a cheerleader. Seven years of my life were devoted to 5 a.m. wake-ups accompanied by vicious, if accidental, elbows to the face, agonizing performance anxiety, and the most intense collective bond I’ve ever had with a group of people. While I regret nothing, I’m sure you didn’t question why I began this article with “don’t tell anyone.” There’s a pervasive attitude that cheerleading is cutesy quasi-exercise for delicate females at  its best, and a de-feminizing exploitation fest at its worst. To get a better perspective, one needs to get inside the sport.

I waited for the Vikes cheer team to arrive at the CARSA performance gym and was greeted with curious smiles from team members who wondered why I was there, but were genuinely welcoming. The 27-member team, three dedicated coaches, and bright movie-set quality gym made the perfect varsity scene as the cheerleaders dragged mats out to practice. Between flexibility exercises and cardio, the team couldn’t help but smile and converse in general excitement — call me soft, but this group has the kind of connection that elevates a room.

Paradoxical thoughts ran through my head as I watched the practice and remembered my own experiences. Cheerleading is a completely legitimate sport: watching the Vikes get ready to stunt reminded me of the sheer physicality involved in throwing people into the air and performing gymnastics in strictly timed sequences. But the pride and awe were tempered as shame filtered in again — the shame of being connected with the stereotypes attached to cheerleading by the media and NFL dancers with platform boots and pom-poms.

Competitive cheerleading comes burdened with internal sports-based challenges and demeaning social stigma. These negative associations may be due to the roots of cheerleading. It wasn’t until the 1980s that cheerleading squads began to branch from secondary entertainment at sporting events (bearing the implication that the cheerleading isn’t worth watching on its own, aside from its lascivious pleasure for both the players and the audience) to squads not affiliated with schools or sports teams, with competition as their main objective.

“Sometimes people just don’t get it,” says Emma Brautigan, one of the three Vikes coaches. “What they know about cheerleading is what they’ve seen in Bring It On.”

Watching the Vikes cheer team was a refreshing dose of how competitive cheerleading works to break these stereotypes, specifically regarding gender. The team captain, Ryan Isherwood, stood in the middle of formation looking completely confident and proficient. He explains that he experienced cliched reactions to his cheerleading career when he first joined the team five years ago. “It was worse in the beginning”, he says.

Anecdotes shared by my old male teammates often included questions about their sexual orientation that arose from putting themselves in the position of traditionally semi-erotic sideline dancers. Male cheerleaders continually fight against gender-based discrimination in a typically female-dominated and historically sexualized sport.

But male cheerleaders do amazing work for the sport’s image in general; they contradict the typically dainty view of cheerleading by exuding extreme physical strength that gives overwhelming height and stamina to stunt routines, thus highlighting the female strength also involved in each routine.

“A lot of people don’t know that cheerleading is a sport,” says ex-gymnast and new team member Timothy Reynolds. Reynolds is one of the central tumblers on the team and it shows in his muscular, athletic build. Tumbling is mandatory in competitive cheer routines, demanding that athletes perform flips, handsprings, and tucks across the gym floor.

There’s no doubt that, by any standard of physical exertion, this is a sport. Routines consist of crisp movements, split jumps, gymnastics, dance, and advanced stunting. The team practices six hours per week in addition to performing at various basketball games, totalling about 16 hours per week spent cheering. Two major competitions in Langley and Vancouver are approaching at the end of the spring semester. Practice times will increase, as will mandatory dedication; the Vikes compete at the highest level of competitive cheerleading, a level of work that would be impossible with the platform boots and ruthlessly catty attitudes of on-screen cheerleaders.

Admittedly, there is a kind of beauty-pageant-type tradition for certain teams at competitions, evident by the glitter-clad eyelids of some 10-year-olds in attendance, but Brautigan insists, “that’s not what [the Vikes are] about.”

Next time you watch a cheerleading film about petty girls, consider that what you’re viewing isn’t just entertainment, but the perpetuation of nonsensical, anti-feminist stereotypes, and in no way represents the strength of real cheer athletes who are fighting not just for athletic excellence, but against the socio-normative barriers that prevent them from garnering the respect they deserve.