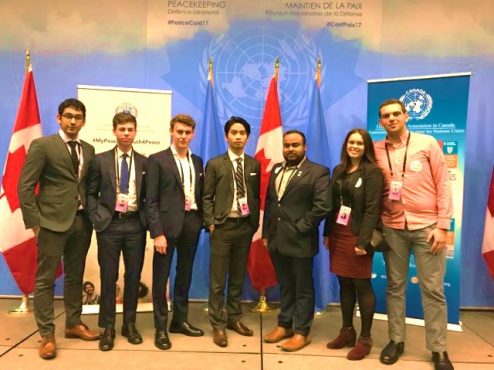 While young people have long represented the embodiment of future hope and change, it’s not often they are given the opportunity to actively weigh in on current global policies. On Nov. 14–15, seven UVic students were selected to help advise on a plan for international peace.

Representing UVic, this delegation traveled to Vancouver for the Youth As Peacebuilders Forum, held in conjunction with the annual United Nations Peacekeeping Defense Ministerial. 130 youth delegates — aged 18 to 29 — were selected from across Canada to work together in consulting on clauses to be included in the Canadian proposal on peacekeeping to the United Nations Security Council.

“It is unique for the UN and the Government of Canada to involve youth in this way, especially in peacekeeping,” said Dipayan Nag, a third year student and head delegate of the UVic delegation. “Generally, consultations with youth are low-key and act as a token or a meaningless precedence without any effect.”

The forum is part of an ongoing discussion sparked by the 2015 United Nations Security Council Resolution 2250, which implores countries to increase the representation of youth in decision-making across all levels of government. Nicholas MacMillan, a second-year student from the UVic delegation, explained that the forum was part of a new push by the UN to recognize youth as actors with agency in international politics—intended to break stigmas and stereotypes surrounding their inclusion in debates.

“Though I wish to be cautious of overstating our role,” MacMillan said, “it seems fair to say that this conference, and ones like it, is [an effort] by the United Nations to address criticisms with [its] policy on youth in governance.”

At the forum, delegates constructed a proposal focused on 14 predetermined topics, including domestic issues like economic inequality and foreign policies regarding Syrian refugees and Canadian global leadership. Groups of 10 were devoted to each of the topics based on delegate interest, and each group was challenged to write “actionable” clauses. At the end, topics were presented to the entire delegation, which voted on the five to be highlighted in the final proposal.

“It was really interesting to hear the other brilliant ideas from the other youths I was working with, and feel like my ideas were contributing to something real,” said Lily Hamilton, a UVic delegate and second-year student.

While UVic delegates expressed a strong belief in the significance of youth involvement in modern global politics, they were initially wary in regards to the general nature of youth inclusion in forums.

“Many youth feel disenfranchised and excluded from politics, both locally and globally, which can be seen in ever-declining voter turnout amongst that group,” said MacMillan. “One of the primary concerns we raised in our proposal was ‘tokenism,’ in which youth are included in discussions only superficially.”

Now that the delegation has submitted their proposal, Nag stated that the overall impact will be decided by Canadian politicians. “This forum is going to be as effective as the government wants it to be. As the youth, our responsibility was to create and suggest radical but feasible policies which we think will make the world a better place, but we all must be involved to make sure that these policies are implemented.”

Nag attributed the analytical geopolitical problem-solving skills of the UVic delegation members to their years of experience in UVic Model United Nations Club. “[Model UN] is a forum for the youth to present their voices and thoughts into the situations that plague the world today,” said Nag. “I believe that UVic, being one of the more diverse universities, can produce many different schools of thought. It is like a mini UN.”

After returning back to the island, the UVic delegation is hopeful their proposal, and the voices of other young people like them will help bring about positive global change.

“If these ideas are to be implemented, it could make a huge difference at home in Canada, and around the world in creating and maintaining peace,” said Hamilton.

“Young people are the future. By involving us in decision making and discussions, we learn from a young age the qualities and information needed to be leaders and make change in this world. These experiences allow us to grow and discover our passions and how we can fight for change and for what we believe in.”