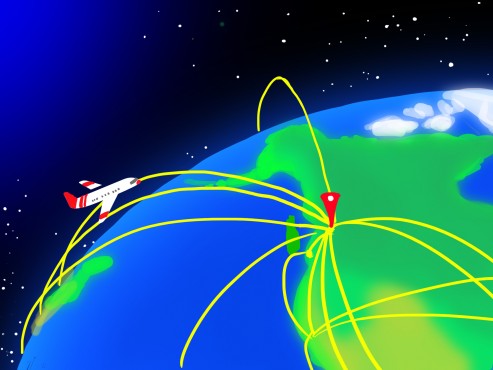 An Icelandic air carrier has announced record low prices for flights between Canada and Europe, commencing May 2016. Discount airline WOW Air, based in Reykjavik, is offering Canadian travelers the chance to fly to Iceland with tickets starting from $99 one way, and connecter flights to 16 other European cities from $149.

As enticing as this may sound, WOW Air’s captivating prices have disappeared in the two weeks since they first revealed their new routes.

“Often those are promotional prices to start out, so they’re just trying to get people’s attention,” says Colleen Jackson, a senior travel consultant at Merit Travel in the SUB. “It’s also not a matter of every single seat on the plane being $99 . . . Airlines break their flights into blocks of prices based on supply and demand. So the first few people to book might get that great fare, but as the plane fills, it tends to be more expensive.”

Jackson has been working with student travelers for over 20 years and knows that as the number of carriers offering international flights from Canada increases, travelers will benefit from competition between companies.

However, it is still important not to book budget flights on an impulse, without first looking into your options.

“I’m always pointing out the big picture. You want to look at the whole plan and know how it’ll fit together,” Jackson said. She cautioned travelers to be aware that piecing together the separate parts of a trip can end up costing more than booking it all at once.

For example, Jackson pointed out that tickets to travel hubs in Eastern Canada, such as Toronto or Montreal, will usually cost at least $300–$350 per direction. So that $99 ticket quickly becomes much more expensive.

WOW Air plans to operate year round, departing from Montreal and Toronto on Mondays, Wednesdays, Fridays, and Sundays.