Bumbershoot shows the Pacific Northwest how to rock

At the ripe old age of 46, Seattle’s Bumbershoot Music & Arts Festival has blossomed into one of the most recognizable and accredited festivals in America, drawing thousands from all over the continent every year. The Labour Day long weekend event is held at the Seattle Center, just minutes from downtown Seattle, and runs for three days and boasts six music stages — including the EDM and hip-hop heavy Key Arena stage and the outdoor Memorial Stadium main stage.

Bumbershoot, unlike many struggling festivals, has always been able to organize stellar lineups for its attendees, allowing it to grow into a major social staple in Seattle. This year’s Bumbershoot was no stranger to headliners, with names like Lorde, Weezer, Odesza, Flume, Solange, and Big Sean performing. It also drew many exceedingly talented smaller performers who remain under the mainstream radar (international acts like Honne, from London, and local acts, like the 21-year-old artist Harrison Brome from Vancouver, performed captivating sets on the outdoor Monster Energy Stage). 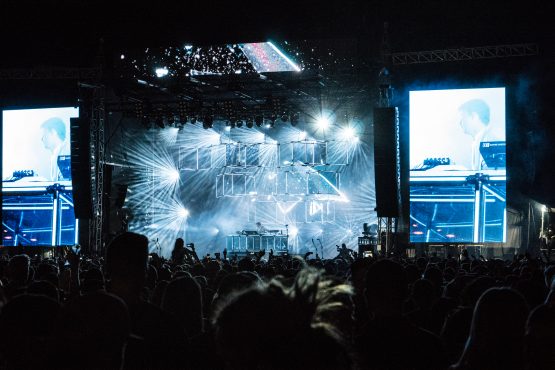 However, the stage wasn’t only for younger musicians. Veteran Philadelphian hip-hop group The Roots graced the Monster Stage at the end of the second night, delivering a soulful performance while live-streaming to multiple children’s hospitals around the country and shouting them out individually during the show. The charity-endorsed show pulled the crowd together that night, and those at the festival turned up the atmosphere to show their love and support for sick children across America.

One of the more noteworthy acts that weekend was Lil Yachty — an American rapper who has sharply risen to fame and become one of the most recognizable figures of current hip-hop. I had seen him before at the Vogue Theatre in Vancouver, and was left slightly underwhelmed by that show, but this time his energy and stage presence proved why he’s one of the most sought-after artists around right now.

A third of the way into his set, a member of the crowd threw an elephant mask on stage which Yachty proceeded to put on.

“It’s a little sweaty,” he said, “but that’s okay.” The mask received some thunderous approval from the crowd before Yachty continued on with his set, elephant mask and all.

He also showed how he wasn’t going to hold back; in true Yachty fashion, he called out the V.I.P. section for being too old and not rowdy enough.

“Y’all over there sipping tea and relaxing,” he joked, “but that’s okay. I get it!”

Yachty went on to spray water bottles onto the crowd and incite multiple mosh pits with his most popular bangers like “Broccoli” and “1 Night,” with large numbers of people asking to be pulled off the floor because it was too hectic.

Between acts like Weezer, who performed some of the best songs from their massive repertoire while covering tunes like Outkast’s “Hey Ya”, and Vince Staples drawing arguably one of the biggest crowds of the festival, it turned out to be a brilliant weekend in Seattle. Unlike our province’s own bankrupted and cancelled festivals, Pemberton and Squamish Valley, it seems like for now, Bumbershoot will roll on and remain one of the elite contenders in this age of modern music festivals.