When UVic students returned to school on Sept. 4, they had 69 extra bus trips per week to choose from, according to Meribeth Burton, corporate spokesperson for B.C. Transit.

While students customarily commute to campus for classes Monday through Friday, 49 of those additional trips are scheduled for Saturdays and Sundays on Route 26, between the dockyard and UVic. These trips will benefit students who reside on campus and want to get into town, Burton said. Seven additional weekday trips are also scheduled for Route 26.

In addition, Route 12, between University Heights and UVic, which was previously served exclusively by community shuttle buses, now utilizes conventional buses during peak times to avoid leaving passengers behind in periods of high demand.

According to Burton, the increases in frequency were achieved through a “creative strategy” to transport more people without added resources. The Victoria Regional Transit System hopes to offset the time required for the additional trips by taking seven routes off Ring Road, where buses are often caught in congestion due to heavy pedestrian traffic.

The congestion slows down buses, making them late, which requires extra time in the schedule.

Buses on these routes now travel directly to the UVic Exchange via the intersection of Sinclair Road and Finnerty Road.

On all of these routes, however, a section of the passage is along McKenzie Avenue, which is undergoing construction expected to last until November.

Mike Lai, manager of Transportation for the District of Saanich, said the contractor is aware of the need to accommodate buses travelling to and from UVic.

One accommodation will be to try and ensure two-lane traffic during peak hours, with single-lane alternating traffic confined to off-peak hours whenever possible. When single-lane traffic is necessary, traffic controllers, known in the trade as “flaggers,” will watch for buses and try to give them priority, Lai said.  However, motorists will be expected to drive more slowly during construction.

Taking buses off Ring Road was one of the recommendations made in the Campus Transit Plan finalized in January 2013. The plan was drafted by B.C. Transit and UVic after consultation with students in the Student Union Building (SUB) in March 2011. It forecasts future transit demand on campus and outlines both long- and short-term options to improve transit and to support predicted increases in ridership.

One overarching problem is transit terminal capacity. The main Finnerty Road terminal on campus has 14 bus spaces, but 17 bus spaces are currently required. The terminal is expected to need 21 bus spaces within five years, with this number increasing to 30 in the long term.

Four possible options for increased terminal space on campus were included in the Campus Transit Plan. The UVic Students’ Society board of directors voted May 13 to tentatively support locating a new terminal between Finnerty Road and the SUB. A final preferred location will be selected in an update of the campus plan, scheduled for 2014. 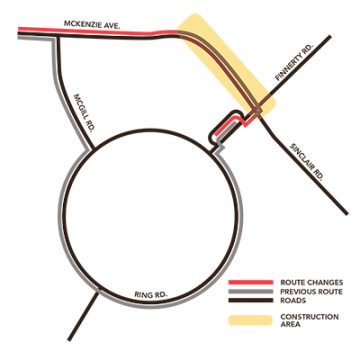