Canada hits the podium at Pan Am Games 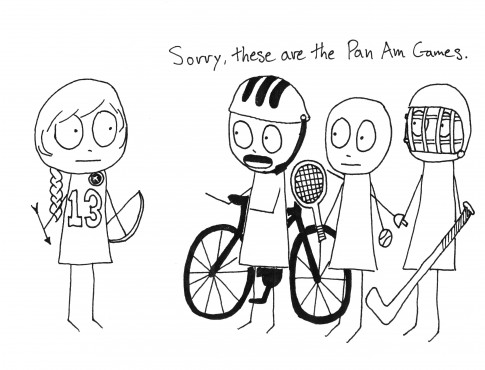 It’s been a busy summer of sport in Canada. Athletic marvels started with an exciting Women’s World Cup held across the provinces, and continued this month with the Pan American Games based in Toronto. Athletes competed in a myriad of competitions throughout July, with Canada finishing second — their best finish since the 1967 Pan Am games, also held in Canada.

Despite the second-place finish, the 2015 games were the most successful for Canadian athletes in the history of the games, with records being broken left, right, and centre.

The gold came early for Canada, with the women’s kayaking team winning the very first medal of the games, and coming close to winning the final medal in men’s volleyball. But the team had to settle for bronze, with Victoria-born Frederic Winters captaining the team to a four-set victory over Puerto Rico.

Both medals contributed to a medal total of 217, second only to the United States’ 265 and marking the only time Canada has ever broken 200 medals in Pan Am history. This tally was boosted by a number of events that debuted at the 2015 games, including golf, canoe slalom, women’s baseball, canoe sprint, and rugby sevens. Canadian teams and athletes won medals in all of the new sports but golf.

Vancouver Island found itself with plenty of connections to the games, too — more than 50 athletes from the island travelled to Toronto, with many of them winning medals. Vikes alumni Kaitlyn Williams, Thea Culley, and Danielle Hennig won bronze for the women’s field hockey team, and Nanoose Bay-born Mike Mason came second in the men’s high jump, finishing behind fellow Canadian
Derek Drouin.

There was also heartbreak for island athletes, however — and for Emma Fletcher in particular. The Victorian soccer player and the rest of her teammates had plenty of support following a captivating World Cup run earlier this summer, but their medal moment was just out of reach following a tight 2-1 loss to Mexico in the bronze-medal match.

The games still proved to be a fruitful venture for many Canadians, with Damian Warner capturing the country’s attention and imagination in a stunning decathlon. Warner made personal bests in the 100m, long jump, discus, and the 1500m, setting a Canadian and a Pan Am record with 8 659 points — an improvement on his 8 442 points in the 2012 London Olympics. Andre De Grasse also set several athletic records, with his 19.88-second 200m race the best in Canadian and Pan-American history.

Canadian fans of the sporting rivalry between the U.S. and Canada may be disappointed that the U.S. finished above Canada in the medal count, but those same fans will surely be heartened by select events. Not even baseball, America’s pastime, was safe, with a thrilling 7-6 victory recorded by the Canadian men’s team in the gold medal game. Canada bested the U.S. in women’s basketball as well, as Kia Nurse scored an impressive 33 points to lead her team to a 81-73 victory.

Next up for Canadian sports is the Parapan- Am games, running from Aug. 7–15. It’s another in a long line of opportunities to support Canadian athletes — and when they’re doing as well as they have been, who wouldn’t want to?