Mike Gaffney (better known as The Gaff) is one of Canada’s pre-eminent sources of funky good tunes, and he is a man of many passions. While many know him as a DJ extraordinaire, he reaches far beyond the party sets that have made him a mainstay in the DJ community. “I was a sponsored skateboarder when I was younger—from my previous life. I recently started herbalism school. I’m also a certified acupuncturist and a registered massage therapist,” says Gaffney, casually and humbly rattling off a renaissance-man-like list of credentials that sends my head abuzz. 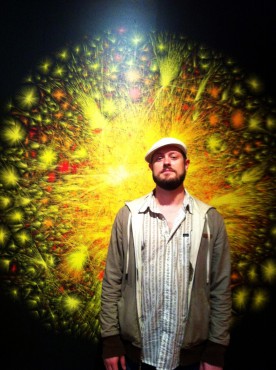 Currently a resident of ToonTown (what the cool kids call Saskatoon), Gaffney’s roots are still here in Victoria, where he spent the vast majority of his formative years. “I still consider myself from Victoria. That’s where I was shaped, where all early years were skateboarding and listening to hip hop—my personal vibe.” Another addition to his apparently endless arsenal of interesting activities is the ability to play the ancient Japanese shakuhachi flute, as displayed on a track by Vancouver mainstay Mat The Alien. “It’s a solo instrument used in meditation. Japanese monks were allowed to play it and have it count as their meditation practice. There would be certain periods of time that had to be invested in meditation and playing that flute counted in those hours.”

With all this knowledge and movement in his life, Gaffney turns to Eastern philosophy time and time again for sanity’s sake. “Balance. It’s definitely a recurring theme in my life. Tai chi is all about balance, the yin and yang, and skateboarding is about your regular and your switch stance and in DJ-ing you have your left turntable and your right turntable.” In fact, a mainstay of Victoria culture prompted him to start walking towards the balance that has become one of his guiding principles. “I had been reading and was interested in chi, energy, energy fields and auras. I thought I needed to go find a master, and then in the back of Monday Magazine where the ads were I saw an ad that said ‘Tai chi with Tek,’ and I thought that sounded pretty hip-hop,” Gaffney laughs.

But all these things happen in the background of how we all see The Gaff. His DJ sets are the stuff of music nerd dreams. They’re like that because Gaffney is a true-blue music nerd, to the core. “You have to be a certain kind of person to go on a record-digging mission, going to some used record store. You have to be ready to spend three to six hours in there without getting bored. [It won’t work ] if you go with a regular person and 20 minutes later they want to go go-karting or something.” It’s a defining feature in the world of DJs, especially those DJs that are known to the public as archivists, paying tribute to and watering the roots of modern music through their works. “Buddies like Skratch Bastid, Nu-Mark [Jurassic 5] and Z-Trip, these are just guys who have a lot of records. When we get together, when the show’s over, a lot of young people would go to the after-party and stuff, but when I’m with those guys we kind of nerd out and go back and listen to records.”