Carrying the torch: A chat with NSU Firekeeper Blake Desjarlais 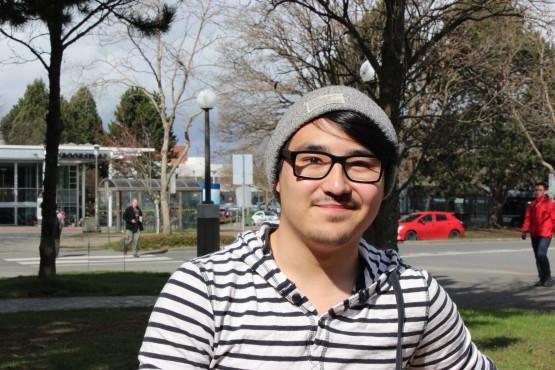 Blake Desjarlais says “the greatest piece of mind I have is that there’s gonna be a group of students like the NSU who are involved . . . who always fight for [First Nations] to be heard.” Photo by Myles Sauer

“It gives me great pride and honour to be able to serve indigenous students, because they’re way more powerful than you’d imagine . . . They can stare down the barrel of a gun and still have hope.”

So says Blake Desjarlais, Native Students Union (NSU) Firekeeper and fifth-year Political Science and Indigenous Studies student. And it’s an honour he does not take lightly, as became evident while speaking with the Martlet.

Hailing from the Fishing Lake Métis Settlement in Alberta, located on Treaty 6 land, Desjarlais studied for two years at MacEwan University in Edmonton. But the lack of support for indigenous students made it “hard to survive as an indigenous person,” so he moved to Victoria in January 2014.

Desjarlais was initially drawn to UVic by the First Peoples House. “I heard about it, and I said ‘I want to go to UVic. It sounds like being an Indian’s okay.’” Upon arriving, he quickly became involved with the indigenous community, and was elected to the NSU’s administrative council in the fall of 2015. One year later, the NSU elected him as firekeeper.

As he describes it, Desjarlais’ role is not only to be someone that indigenous students look up to, but also to be “somebody that serves.”

“[Being firekeeper means] to be community-oriented, to be in that mindset that you’re a servant. And I like that,” he says.

The position is not without its challenges, though. “There’s a lot of hard parts,” Desjarlais says. “No matter where you go, there are people who have a really loud voice for the amount of information they don’t know.”

Desjarlais cites an oped by a UVic student published in the National Post, titled “I am too privileged to be liberal,” as an example. “I could never get into that or [get] something on their website or anywhere close,” Desjarlais says. “And it takes one person and his friends to get a message [that’s] so violent to so many people so easily in this country.”

While admitting there have been other challenges, including last semester’s Undergraduates of Political Science misunderstanding, Desjarlais says the NSU and UVSS have “also done a lot of good work together.”

The key to good work, he says, is making sure everyone comes to the table with honour. “Anytime we make an agreement with someone, [we] must come into them as honourable people . . . And it’s always a question of are we thinking the same thing? Are they on the same side as that?”

“I really do think there’s more good settlers than bad settlers,” Desjarlais says. “We’re never gonna say something unless [settlers] do something bad, and a lot of things they do are good for the community, whether it’s for themselves, their friends, or their family.” Desjarlais mentions folks asking for permission to host bake sales on campus as an example of people going too far in being considerate to indigenous students, though he laughs at the idea of him shutting a sale down.

“I think we can all agree bake sales are pretty awesome,” he says. “I would never say no.”

The NSU has also been in consultation with the university around the Indigenous Academic Plan. From that consultation, Desjarlais says, there’ve been two main requests: that indigenous students have an active role in governance, and that Elders be stakeholders in that governance.

“It’s trying to dismantle the administration’s desire to have VPs, directors, [and so on], and make it a table, a roundtable, where we’re all respected as stakeholders in this higher learning,” he says.

Desjarlais also wishes UVic could formalize its relationship with the NSU. “They seem to see us as this group that bubbles up when things go bad, and pops and goes back into the water. But we want a seat at the table.”

“We want [to] have [President] Jamie Cassels sit down with us, have some coffee, and talk about the issues pertaining to indigenous students,” Desjarlais says. “[The NSU] forming its own relationship with the university is integral in how to better support indigenous students learning.”

In the meantime, Desjarlais will continue to build relationships in the community that’ll last for years to come.

“I have a great reassurance that no matter who comes into the position of firekeeper,” he says, “[they] understand that to be a firekeeper, symbolically, is to keep the fire going, and that fire is shared with all of us.”