CARSA races to the finish line 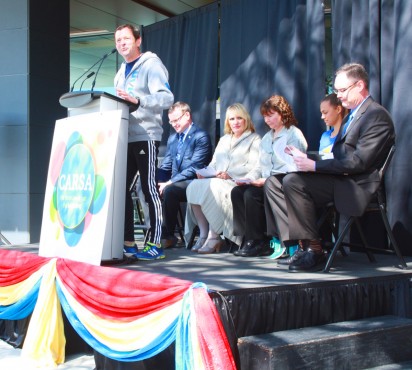 President Jamie Cassels speaks at the CARSA ceremony with other UVic and CanAssist officials; Cassels says CARSA will be where “aspiration transforms into achievement.” Photo by Sarah Allan (Photo Contributor)

On May 1, the University of Victoria’s Centre for Athletics, Recreation and Special Abilities (CARSA) opened its doors to the public for the first time, marking the end of several years planning and construction; but as Vikes Recreation Director Clint Hamilton said to those gathered at the opening ceremony, “the finish line is just the beginning.”

Hamilton was quick to pass the mic to Cassels, who lept to the lectern in full runner’s attire. “I want to be the first one in there,” Cassels joked. He expressed how pleased he was to see the project completed, and recalled watching the building “come up out of the ground” from his office window.

Cassels stressed during the ceremony and in a subsequent interview that CARSA is all about inclusiveness. “There’s something for absolutely everybody,” he said, referring to the 70 000-square ft. facility, which includes dance spaces, dedicated spin class studios, weight-training areas, and the Peninsula Co-op Climbing Centre. Cassels said CARSA will be a “centre of excellence” for the University.

CanAssist has been on campus for 15 years, “so what better way to support that [inclusiveness] than to bring CanAssist into [CARSA]?” Cassels said. “[It shows] that we’re going to make every effort possible to make sure that everybody, no matter what their level of ability, is able to take advantage of [the facility].”

Kennedy took a moment at the ceremony to thank the construction workers and engineers who “could make the project happen.” Kennedy stated that CARSA is the first building on campus to use a geothermal heating/cooling system, and will aim to reduce water consumption by 40 per cent.

Connor McGuigan, a Biology student and upcoming novice rowing coach, said that the building provides a great opportunity for varsity athletics. “It’s awesome. It gives us top-of-the-line facilities for the campus and the varsity athletics teams which is really nice.”

In the end, Cassels emphasized that CARSA was a step forward for the university. “It’s a big investment in students. Recreational opportunities, [and] active, healthy living is a fundamental part of personal success and academic success.”