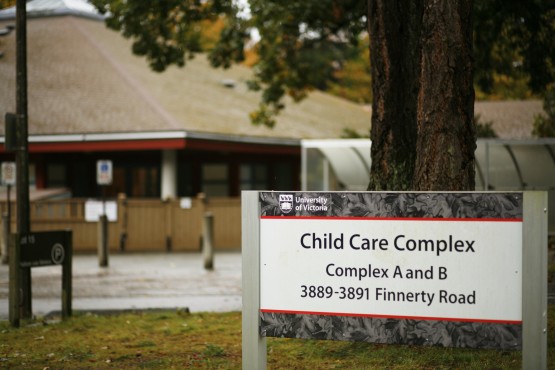 With the fate of Centre 6 still undetermined, parents are running out of time to make important decisions for their child’s care. File photo by Belle White, Photo Editor

A parent knows how important time is.

It’s why LeAnne Golinsky is early to my interview with her. It’s only 9 a.m., but Golinsky has already dropped off her two kids and bought a coffee, ready now to speak with wide-eyed passion about an issue close to home — saving her children’s child-care program.

“We’ve got grad students that are now trying to make decisions on whether or not they can study next year, based on whatever it is that might happen,” says Golinsky. “You’ve got faculty trying to figure out, ‘am I going to have to leave work at 2:30 everyday?’

“It’s very hard to make contingency plans when you know nothing about what your fate is going to be.”

Consultations regarding the future of UVic’s After School Care (ASC) program began earlier this month on Jan. 9. The program is set to close in five months, creating time constraints that are compounding parents’ concerns.

UVic made its decision to close Centre 6 — the building the ASC program operates out of — in June 2016, after two months of discussions within UVic Child Care Services and with the UVic Child Care Parent Advisory Board. The ASC program’s 48 part-time spaces for children aged six to 12 were to be replaced with 40 full-time spaces for Centre 5, a full-day child-care program for children aged three to five.

Although the university was originally firm in its decision to close the program, it suspended the closure date after a flurry of concerns from parents like Golinsky, who is a member of the UVic Child Care Alliance (UCCA), a group of parents committed to seeing Centre 6 stay open.

In a letter to the Ring, UVic’s news service, published in July 2016, the UCCA condemned what they considered “a lack of consultation and transparency” in the university’s decision to close the centre without asking parents for their input.

Following the backlash, the university agreed to consult with the Faculty Association (FA) to discuss potential solutions. However, that first meeting didn’t take place until Jan. 9, 2017, seven months after UVic’s original announcement.

The meetings include a representative from the UCCA, two from the FA, and three from UVic administration and Faculty.

Both UVic and the FA said that it’s too early in the consultations for any developments worth reporting, but Golinsky says all parties are committed to resolving the issue as soon as possible.

“People are very motivated to get something decided before the end of February,” says Golinsky, “because I think the university certainly recognizes and we [the Child Care Alliance] have pushed out enough information to say . . . that time is of the essence.”

In an email statement, Jim Forbes, director of Campus Services, said UVic appreciates the patience of those involved.

“UVic is dedicated to providing high-quality care to children enrolled in Child Care Services,” the statement reads. “The university is hopeful that consultations with the Faculty Association will help achieve our goal of having a solution in place as soon as possible.”

UVic cited longer wait list times for three- to five-year-old full-time care as reason enough for transforming its child care services, but critics of the decision claim UVic did not appropriately consult with parents nor fully explore all child-care options before deciding to close the ASC program.

Forbes said last July that while the “difficult decision” would disrupt some families, it would provide an “important lifeline” for others.

No matter the reason, Golinsky says that with a decision looming on the horizon, the threat of a closure has already affected those in Centre 6.

“You’ve got union employees who are going to be losing their jobs . . . You’ve got casual employees that have not even been officially given notice that the centre’s going to close. You’ve got parents that don’t know what is that they’re going to do. You’ve got grad students that can’t make plans. It’s really an upheaval,” she says.

The next meeting takes place tomorrow. After that, all involved will have five months to make a decision before the program’s scheduled closure this June.

Correction: A previous version of this article said LeAnne Golinsky was a founding member of the UVic Child Care Alliance. She is in fact just a member, not a founder. We regret the error.

We also qualified a statement from Jim Forbes as being made last July.