Chilean artist turns to peace while existing in world of conflict

Guillermo Mier remembers his childhood encounter with Chilean poet Pablo Neruda, a poet who won the Nobel Prize for Literature in 1971. Although brief, their exchange was unforgettable to him.

“When he left the podium, you know, taking pictures and everything, he came, said hello to my father, and then he stroked my head. He was big guy. And he said to me: the message wasn’t in the writing; it was between the lines, in the silence.”

How did such a young kid get to experience this? Mier, a texture-focused painter, was brought up by a father whose friends and co-workers were accomplished, interesting people. It exposed him to well-established people in the arts. Childhood dinner conversations revolved around art, music, design, and science. He was soon certain he wanted to be an artist; he hasn’t doubted it since. 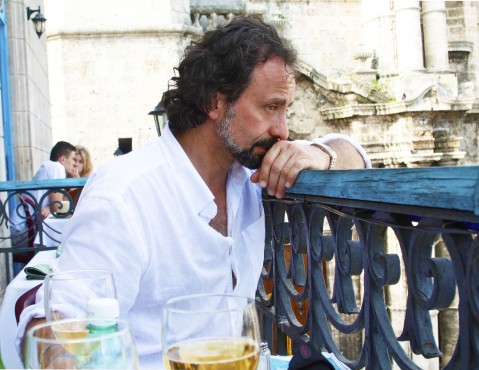 Mier’s art has evolved from canvas painting as a kid to working with texture and pigments. He uses plaster over wood panels that sometimes take as long to prepare as producing the actual art. Mier categorizes his art as “abstract expressionist,” a movement that started in the ‘50s. He admires its unique character and the fact that it leaves interpretation up to the observer.

The approach of the style is to lead our hand to “draw or to paint, and we disconnect from our mind and we use only any other energy that you have in your body to create something that isn’t random.” People tend to overanalyze and pick art to meaningless pieces, Mier explains. The work he submitted to the Sooke Fine Arts Show, “The Reef,” is susceptible to this line of thinking. To combat it, he is working on a website now with the motto “Think with your eyes,” encouraging people to just relax and enjoy what grew from an artist’s labours and joys.

Beyond the technical side, he finds the most meaning in the positive feedback he gets from everyone. Initially he meant for his paintings to be “just pretty hanging on a wall behind a plant or a flower,” but people have instead put them in the central part of their homes, as prized possessions, praising them endlessly. “The reaction they have of my work has really left a big impression on me because I didn’t know that was gonna cause that reaction. So maybe what I’m doing is right,” he muses. “That’s the only thing that actually motivates me to continue.”

Mier grew up in Santiago, Chile, among bouts of political turmoil. He lived through both the Chilean Revolution and the Cold War. In 1973, the military turned his country into a dictatorship. Although life became politically repressed and regimented, Mier remembers the time being relatively safe for him. He recalls with amusement sneaking to the rooftop with his brother one day to watch helicopters bomb the president’s home several blocks from his own. They were mesmerized by the incredible sounds.

Mier’s former wife, Stephanie Nowlan, remembers the first time she met him. It was in Spain—she’d been exploring Europe at 18 years old, and he was touring with a band and a saxophone he “hardly knew how to play.” They instantly hit it off. Though their relationship has ended, it was the mundane aspects of life that made them drift apart more than bitterness towards one another, and they remain good friends. She thinks it’s important to note that upon arriving in Canada, Mier had no family, friends or connections to help him adjust, yet he still managed to make a living for himself. He did this by starting a business offering renovations, then moving on to interior design, and working his way up to create a career as an artist.

Upon moving to Victoria, Mier noticed a dramatic change in everything—religion, culture and atmosphere. With the large influx of an Asian population in North America, he was suddenly cognizant of different ways of life. Mier became a strong admirer of aspects of the Buddhist philosophy like the “zen” motto, “you get what you give,” but he is definitely not a follower. “I’m afraid of religions,” he admits. He says they cause the bulk of major world conflicts, and he prefers to promote peace and harmony instead. He hopes that social media has the ability to connect the world and improve tolerance towards different beliefs and “make this world, for once, one world.”

Although he has many strong opinions, Mier shrinks from showcasing them in his art. “I don’t believe in art as an imposition of your personal beliefs,” he says. “I think art for the sake of it is good enough.” He fears that infusing his art with political and religious leanings might alienate many and niche him. On the one hand, a cult-like following might worship his work, but the rest of the world could hate it. He wants to instigate contemplation in his audience, rather than spark controversy. He notes that making art for the sole purpose to shock is selling out its integrity.

“My message is beauty and harmony and more than anything—introspection.”