Coffee can signify different things to different people. To some, it’s a social lubricant and a warm beverage to gather around and talk. To others, it is fuel to make it through midnight and beyond. Some chug it quickly before rushing out the door in the early morning. Others sip it slowly on their commute. Others yet only drink it when grandma is over. But whether it is enjoyed for an extended time or drank quickly, coffee has a culture and complex personality built around and within it.

At UVic, coffee is everywhere. Students can buy coffee at 10 different service locations around campus. UVic Food Services offer five different types of coffee on campus. Their coffee sales (drip coffee and specialty drinks) from April to September 2017 made up 12.7 per cent of their overall sales: 6.67 per cent from drip coffee sales and 6.03 per cent was from specialty coffee drink sales. Keep in mind that these numbers are from the summer semester when only a few food service locations were open, fewer students were around, and the weather was warmer. Regardless of season, coffee consumption on campus is constant. So, at the core, why do we students drink coffee at all? 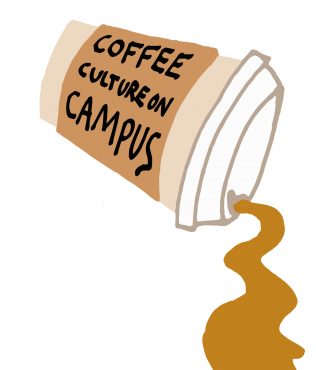 The most obvious reason for coffee’s popularity at UVic is coffee’s high caffeine content. An average cup of coffee contains about 95 mg of caffeine, roughly a quarter of the caffeine that an average, healthy adult can consume everyday without feeling adverse biological effects. Contrary to popular belief, consuming caffeine is not necessarily unhealthy unless you take too much. However, some people are more sensitive to its effects than others.

See, caffeine works by blocking adenosine, the sleep hormone that tells your body it’s time to get some rest. It just blocks the adenosine, but does not eliminate it. So when the caffeine starts to break down after its chemical half-life of 4–6 hours, people start to feel sleepy again.

Coffee beans are not really beans at all, but are roasted berry seeds from the coffea plant. From the plant to your cup, the amount of caffeine in a coffee drink is actually dictated by many factors, such as roast and brew method. Because of its addictive effects, caffeine is technically the most used and abused drug in the world, with the majority of the global population consuming it everyday.

For someone running on 4–6 hours of sleep or less, caffeine is a heaven-sent solution. It is especially beneficial for the needs of a stressed-out student, since caffeine also causes our body to produce more dopamine, the feel good hormone, and more adrenaline. This explains why coffee not only keeps us awake, but also helps us stay focused and alert.

It is not surprising that coffee and universities have a long history together. Before the time of the internet, coffee houses (a predecessor of our current cafes or coffee shops) were where you went to grab a cup and exchange ideas, news, information, and opinions. Everything from literary critiques, math proofs, political issues, and town gossip were discussed in these coffee houses. They were usually located near universities and often frequented by students and intellectuals. For example, the oldest coffee house in the UK is the Grand Café, which set up shop close to Queen’s College in Oxford.

Each coffee house developed its own special topic of interest, determined by the people who frequented the place. Businessmen, for example, would visit one house and scientists visited another. As was common in the 16th century, only men were allowed into the coffee houses. They became so popular at one point in England that King Charles II attempted to ban them. But the culture of the coffee house prevailed, eventually earning the nickname of “Penny Universities.” Many institutions and movements, such as the London Stock Exchange and the French Revolution, had their beginnings in coffee houses.

According to the Canadian Coffee Association, about 58 per cent of Canadians in 2016 between the ages of 18–24 had drank coffee in the past day. The average person in this demographic consumed 3.2 cups per day. This makes coffee the most commonly consumed beverage — even more than tap water. Lisa Sheppard, the manager of the Munchie Bar in the SUB, reported that in one day, 250 cups of drip coffee, 150 Americanos, and 130 other espresso drinks were sold at the popular campus coffee bar.

At the Munchie Bar, a small cup of coffee from the vacuum canister costs $1.70 for 12 ounces. Munchie Bar also serves other coffee/espresso mixed drinks, such as cappuccinos and lattes, and is manned by a well-trained staff. The Munchie Bar, along with Bean There, Bibliocafe, Finnerty’s Express, and Arts Place are some of the locations on campus that serve more than just plain coffee. While asking around, it is a widely-held opinion on campus that the best coffee is served from the Munchie Bar.

However, if Colin Newell isn’t brewing coffee at his desk in the Clearihue building, he’s buying the Doi Chaang coffee at Bean There, located at the opposite end of the SUB from Munchie Bar. Newell is a self-proclaimed coffee aficionado and the author of the local Coffee Crew blog. As one of the web’s first content creators (Newell started blogging in 1994, just as the internet was introduced), he decided to write about his hobby — coffee. He has now been embedded in the world of coffee for more than 23 years and continues to write about it in his blog. 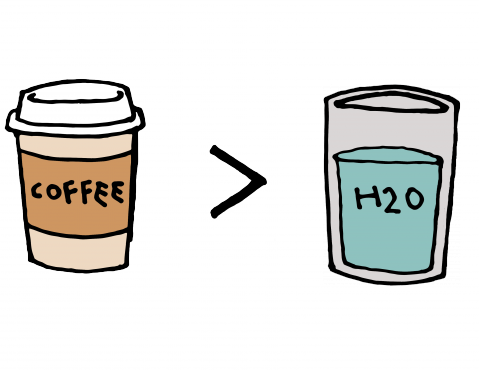 When asked what makes a good cup of coffee, Newell doesn’t have a single answer.

“Coffee is pretty subjective,” he says, “so [for] everybody, whether they’re drinking coffee or tea, whatever it is they’re doing, it’s actually [become] more of a journey than a destination.”

As an experiment, the five types of coffee served at UVic were put to a taste test and critiqued. Newell took on the arduous task of tasting a handful of coffees in one day. According to his experienced taste buds, out of all the brews tasted, the Salt Spring Coffee dark roast from the cannister at Finnerty’s was the best flavoured one.

Coffee blogger Colin Newell and I walked around campus and tasted Salt Spring Coffee at Finnerty’s, Kicking Horse at the Munchie Bar, Doi Chaang at Bean There, Doi Chaang at Bibiliocafe, and Spirit Bear at The Boardwalk Cafe in Mystic Market. All the coffees were taken from the drip coffee vacuum canisters at around midday (12:30 p.m. to 1:30 p.m.). The time here is important because as the day goes on and fewer people buy coffee, the canisters are filled less often, leading to coffee that isn’t as fresh. For consistency, all the coffees tested were the dark roasts of each type and all were drank black.

Below are my and Newell’s recorded comments on the coffees:

The Salt Spring coffee from Finnerty’s was extracted properly, giving it a complex flavour devoid of any funny, bitter, or burnt notes.

Kicking Horse coffee from the Munchie Bar was a cleaner tasting brew with a tiny bit of astringency to it. It tastes lighter, slightly sweeter, and less complex than the Finnerty coffee. The coffee is often claimed to be the best coffee on campus, and it arguably owes this title to the quicker turnover rate in the canister, since it’s poured out and refilled more often here. This ensures a fresher, less oxidized brew awaiting customers who fill their cups.

The Doi Chaang coffee from Bean There in the SUB presented more chocolate and caramel flavours in the brew. At this point, we observed that all the coffees tasted were about the same level of quality, although different in taste.

Drinking Doi Chaang again at the Bibliocafe, we observed that it tasted much like the Doi Chaang served at Bean There. The quality and taste were pretty much at the same level. It’s not exceptional coffee, but it’s not bad coffee either.

Lastly, we tasted the Spirit Bear coffee from The Boardwalk Cafe at Mystic Market. It was slightly more bitter than the other coffees and wasn’t as warm either (probably an older brew in the canister). Not our favourite given all the ones previously tried.

It’s important to remember, though, that it’s not just the roast or brew that makes a coffee taste good. The freshness of the brew, the temperature of the coffee, the 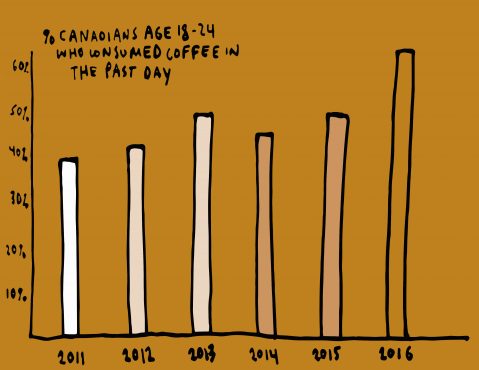 consistency of the brew pressure, and the storage method after brewing all play a technical role in manipulating the coffee’s chemical composition. As Newell pointed out, sampling blended coffee is confusing since an ideal coffee is “cupped” (the practice of observing the tastes and aromas of brewed coffee) in its purest form as an espresso.

In the end, they all affect the coffee’s taste and dictate the balance of sweet, sour, and bitter flavours. However, a café’s service quality and atmosphere affect the psychological aspect of coffee enjoyment. Even the cup which the coffee is served out of has a part in how the beverage is perceived.