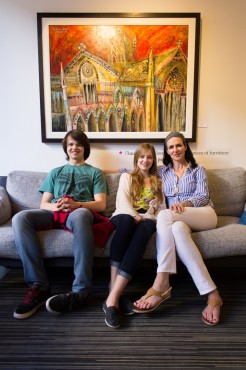 After interrupting a Friday evening of wine and friends, Tanya Horn and Ian Scanlan, a newly married couple, sat before me on the very couch that shaped the character of their new art gallery.

Couch* officially opened to the public on April 4th following months of preparation, research, and travel. The space on Broad Street , which was once home to Winchester Galleries relocated, and became the ideal location for Horn and Scanlan’s project.

Horn was living in Metchosin for the past 17 years, raising four children and working as a nurse. She started a degree in Fine Arts after high school, but took time off to travel Europe for five years.

Sitting in Tofino with a close friend, she pondered her future. She had worked with sculpture and had an eye for art, but was realistic about her prospects.

“I’m talented enough to know I’m not that talented,” she said.

Her friend suggested opening an art gallery, and two hours later plans were already in motion. At a quaint celebratory lunch at Pagliacci’s some time later, Horn and her partner made the final decision to open the gallery.

When the planning stages became a reality, the aesthetically ideal couch came first. Love at first sight, they put it aside until they decided to sign the lease.

“We needed a really good name [for the gallery]. We noticed some businesses have names that are hard to remember,” she said.

Coincidentally, the word “couch” isn’t just for furniture. It is also the process of “preparing a canvas for fine art,” she said. The art gallery then centered around the playfulness of art, and the different definitions of couch, which are written on the walls throughout the gallery.

English sculptor Heather Jansch, once married to Scottish folk musician Bert Jansch, was the first artist Horn wanted to display in the gallery. Jansch has been sculpting since the 1970s using driftwood, and creates life-size sculptures of horses that Horn was drawn to.

Horn is the communicator: receiving information from prospective artists, timing shows, and deciding how the art would fit into the gallery.

Scanlan works behind the scenes with logistics, accounting programs, and being the site manager during construction. Also an airline pilot, his ability to fly internationally helped Couch* to visit prospective artists from different continents around the world.

Horn and Scanlan admit the moments that make their project worth their time are when individuals walk into the gallery and feel a spark, or an emotional connection with the art displayed. “What we wanted was a place where people would feel at home, come in and look, think about collecting, or just feel better at the end of a long day,” Horn said.

Couch* will be revamping their hanging collections over the summer, and is introducing new exhibitions in the fall.