Confabulation pushes the power of stories 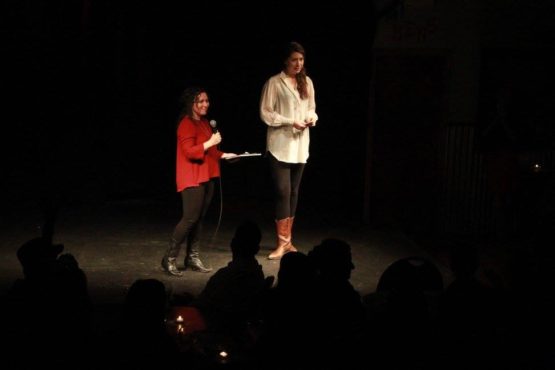 Cassandra Togneri and Carol-Lynne Michaels on stage at the Victoria Event Centre for one of the Confabulation showcases. Photo provided

People love stories, and listening to a good story told well is time well-spent. However, it happens too often nowadays that we only hear from people online or see their stories as videos on our newsfeeds. Being caught up in the hustle and bustle stops us from really appreciating personal storytelling, told face-to-face and heart-to-heart. Thankfully, a showcase in Victoria is sitting us down for some good old fashioned storytelling and reviving that warm feeling of hearing a satisfying true story.

Confabulation is a storytelling series where people share honest accounts of true stories they have lived through. The stories can be as simple as what your child told you after reading their bedtime book or as elaborate as how you met your significant other. All stories shared are told without props, gimmicks, or notes — in a way turning back to older, simpler times. The emphasis is really on the story and the people sharing it.

Victoria’s branch of Confabulation holds events every third Thursday of the month (throughout their ten-month season) at the Victoria Event Centre on Broad Street. Each event has its own theme and six or seven storytellers.

The most recent Confabulation showcase was on March 15 and the theme was “Engineered” — stories of creation, construction, systems, and devices. The event featured seven storytellers with stories that were both emotional and funny.

One of the storytellers at the most recent Confabulation was Matt Goldberg, the original founder of Confabulation in Montreal. Inspired by New York’s famous storytelling show “The Moth” and his own previous work with stories and storytelling, Goldberg ran Montreal’s first Confabulation showcase in 2010. The first show had six of Goldberg’s friends and colleagues sharing stories about important “firsts.”

Confabulation took off quickly in Montreal’s art community. Goldberg recalls, “What was amazing to me is that it locked in so quickly. Like I knew I loved stories, I didn’t realize how easy it is to sink into great storytelling.”

“You don’t have to be an actor or a stand-up comedian or any kind of performer to do this. You can be yourself and that is one of the most important things,” he says.

Michaels and Togneri both had the idea of a storytelling showcase floating in their minds for some time. They finally got together and made their idea a reality in Victoria, producing the first Confabulation show in September 2016. Their partnership is what they would both describe as “serendipitous.”

Both Michaels and Togneri understand the value of the raw storytelling that Confabulation offers to Victoria audiences — filling a hole in the local arts community that most people didn’t even know existed.

“A lot of our social interactions are based on convenience and we have busier lives,” says Michaels. “This is like a naked experience. You have only a microphone between you and someone who’s sharing something that A.  they’ve worked really hard on telling, B. is super true and honest and vulnerable and they may have never told it to anyone before.

“To hear this human experience, at this level, sitting in the dark, still in a safe place, I just imagine how heartening it is for everyone else because that’s I how I feel,” she says.

The speakers at the recent Confabulation showcase shared stories around the idea of engineered creations. The night started with a story about a university team that competitively designed airplanes and how the storyteller literally lost his pants getting the plane to fly. Another speaker talked about how ADHD gave him troubles as a child and how he found order in his chaos. There was a story about a denim quilt and fixing relationships, and another one about solving a Rubik’s cube in secret. The most captivating and funniest of all was the story of how a man chased down his lost phone in downtown Montreal.

The Victoria Event Centre was the perfect location for sharing such funny and emotional stories. The lived-in atmosphere of the place with its laid-back bar and set-aside seating area was just cozy enough to relax the audience — as though they were hearing the story in the comfort of their own living room.

And the audience was the key part of the showcase. Goldberg and Aflalo are convinced that storytelling audiences are, as Aflalo puts it,”the most generous, kind, and sweet human beings you’ll ever meet.”

Tyler Brown, one of the long-time storytellers at Confabulation, thinks there’s no embarrassing oneself onstage. He says that, “everyone’s had tough times, everyone’s been through it. Everyone’s been embarrassed.”

The most unexpected thing that Brown has observed from his five times onstage is that the audience never laughs when he’s expecting them to laugh. “You tell a joke and it just dies,” Brown says, “but then you say something so unfunny and everybody laughs.”

Aflalo points out that anyone and everyone can be a storyteller at Confabulation.

“You don’t have to be an actor or a stand-up comedian or any kind of performer to do this. You can be yourself and that is one of the most important things,” he says.

“All [audiences] want is to sit here and listen to stories and they want to hear it from the person that’s telling it to them. Not the performer, not the actor. They want the person, and I think it’s such a beautiful thing to be able to experience and be a part of.”

Come out and experience live storytelling at the next Confabulation showcase on April 19 at the Victoria Event Centre. You can check out the details for the event on Facebook.

Thanks for reading! If you enjoyed this article and would like to make sure we keep writing articles like it, please consider supporting us on the Martlet 70 fundraiser’s GoFundMe page.
If you hated the article, though, you should still donate to the GoFundMe page (so we can hire better writers).