What graduates think of graduating

After spending sleepless nights editing essays, poring over flashcards for tests, and watching Netflix instead of doing either of those things, you may feel like your post-secondary graduation may never come. University is an undoubtedly trying time, so when you finally make it to the end of your four year degree (or a little longer in most cases), you’re usually happy to see convocation day come. It’s official! You’re done with school!

Following the most recent set of convocation ceremonies, the Martlet caught up with a few students from the Fine Arts department to hear what they had to say about the big day and their reflections on what the university experience meant to them.

“It feels really good,” says Emmett Robinson-Smith, a new graduate with a degree in Music History and Professional Writing. “It’s been a lot of hard work and you know there have been times when I wasn’t sure what I wanted to do, but I’m glad I figured it out, and things feel really good. [It’s] a big weight off my chest.”

For some, like Robinson-Smith, the convocation ceremony was a big deal. Others, however, were happy to get the heck out of there. One such graduate, Sarah Mitch, was picking up a Fine Arts Degree in Creative Writing but would have rather stayed home.

“Personally I would have gone for the whole mailing option if it weren’t for family,” Mitch laughs. “But it’s good, you know. It’s a great option for people who want to commemorate it. It’s good.”

That’s not to say Mitch didn’t appreciate her time here. When asked what she’ll be taking away from her time at UVic, she reflects on the important skill of thinking differently about the world.

Some students enjoyed their time so much at UVic they plan on coming back for more by completing Master’s programs. Applied Theatre graduate Leah Tidey is one of those students, and she says she owes it all to her professors and mentors in the theatre program.

“I’ve had some really amazing mentors since I’ve been here and that’s why I’m doing my Master’s,” Tidey says. “My professor is so amazing [but] he wants to retire, and I’ve decided, you know . . . I’ve got to get one more degree with him first.”

After doing her Master’s, Tidey also plans on teaching (maybe even at UVic, she says) making her a soon-to-be veteran of the graduation circuit.

“I’ll get to be on the other side [of the stage],” Tidey says of her teaching dreams. “Really I just want one of those cool hats, you know?”

“When I see people crying, I start crying too!”

No matter what happens during a student’s years at UVic, it’s the decision of one final dignitary who decides the exact moment when students become graduates. UVic Chancellor Shelagh Rogers has presided over 30 convocation ceremonies thus far, and each student that walks across the stage must be bopped on the shoulder by Rogers’ hat before they can be considered a graduate.

As part of her role, Rogers wears purple and yellow regalia and carries a ceremonial mace into the ceremony. Then, she sits in a elaborate chair with a high back that towers over the chairs behind and beside her. 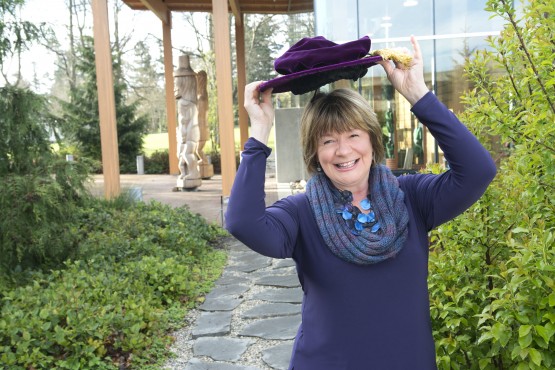 Shelagh Rogers, UVic’s Chancellor, admits each and every graduate from the university with a bop of her hat. Photo by UVic Photo Services

While it may seem that she’s the star of the show, (or “the castle dog” that guards the gates, as she puts it), for Rogers, it’s all about the students.

“My favourite part really is when the students cross the stage,” she says. “I find [it] absolutely just sort of soul expanding . . . seeing their faces and seeing the excitement and it’s all so authentic. I mean you’re in a big moment with every single student that crosses the stage and it’s a real honour to be in that position. When I see people crying, I start crying too!”

Rogers also believes the Indigenous symbolism present at the convocation ceremonies is important. The graduation stage is adorned with Indigenous art and statues, and the ceremony begins with university elders, accompanied by drummers and singers, welcoming attendees to the Coast Salish and Straits Salish Peoples’ territory UVic is situated on.

“We have to acknowledge that we know that in the past here where very many wrong doings and I see this as a gesture of reconciliation,” Rogers says. “Yes, we’ve got the beautiful art … that’s one thing. But I think [having]  the elders or the drummers and the singers [starting the ceremony] is a spiritual practice. Having them there to actually welcome us to the territory is very, very important.”

The day, for Rogers, is a celebration, but it’s one not to be taken lightly.

“The whole enterprise of convocation is so optimistic at a time when there isn’t a lot of optimism out in the big world,” Rogers says. “So i think we should try to feast on it when we can.”

“It’s just so great to see her dreams coming true.”

Some Martlet alumni also recently celebrated their convocation , including Leone Brander, our 2016/2017 Design Director, who is preparing for her Master’s degree at Boston University in the fall.

“I think I’m definitely going to miss the laid-back, west-coast lifestyle I’ve grown accustomed to,” Brander says, “but it will be nice to still be on the ocean.”

Graduation isn’t just for the students — it’s also for the parents, tissues in hand, who ask you to pose 100 different ways for 500 different photos (only to zoom in too close for the optimal Instagram moment).
Brander’s mother, Bev Brander, watched her daughter cross the stage and saw Leone Brander’s dream come to life.

“[Leone has] wanted to be a writer since she was a little girl,” she says, “so it’s just so great to see her dreams coming true.”

Bev Brander hopes her daughter learned some valuable lessons throughout the university process; like an independence and “confidence to continue with her passion with writing”.

One thing Leone Brander hopes she took from her degree?