Could running and writing be the next great combination?

Peanut butter and jelly, macaroni and cheese, Batman and Robin: such classic duos that you or I can’t imagine one without the other.

But, running and writing? Normally, I wouldn’t have thought those two worked so well together.

That is, until I raised my hand in Writing 215, Introduction to Journalism, last semester. I had noticed that a professional journalist, a writing professor, and an aspiring writer (me) had one thing in common: running. 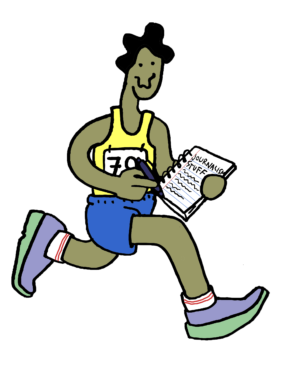 Andrew MacLeod, the B.C. Legislative Bureau Chief of the Tyee and former Martlet Editor-in-Chief, visited that class as a guest lecturer. As soon as he mentioned that he ran cross country in high school, the radar in my brain sounded.

Combined with the fact I run cross country for the Vikes and that our professor Frances Backhouse was a cross country runner in high school, I knew this couldn’t be a coincidence.  Now, I had to dig deeper into this story. I thought to myself, “This is it! The next great Martlet investigative scoop!”

So, I went to interview MacLeod over the telephone, eager to see if there was a correlation between running and writing.

“I have to say it’s a coincidence,” MacLeod admitted. “There are people out there who run and are doing all kinds of things. When you start to think about the numbers who run, I think in some of those races in Ontario there would be a couple hundred people. Multiply that across the country — what are the odds that a room full of people has a few runners? Probably pretty good.”

I’ll admit it: my dream Martlet running-and-journalism article was not to be. Running and writing would not be spoken with the same ease as Tom and Jerry.

However, despite the lack of a direct connection between the two, both MacLeod and Backhouse see similarities between putting pen to paper and putting one foot after another.

Writing and running are similar in how they start as individual processes — you run your own race or finish your own article for the next newspaper issue. But Backhouse connected the structure of a cross country team to a newsroom. Those individual processes combine and work hand-in-hand for the overall finished product for the team — whether that product is a cross country trophy or a finished copy of a newspaper.

“It’s true, you are a part of a team, like say the Martlet — that’s like a team putting together this whole paper,” Backhouse says. “But, you each do your own piece.”

MacLeod also highlighted running’s individual aspect with its contribution to a team goal.

“There is something nice about a sport, where it’s an individual thing, you are alone in it to some degree. Especially cross country, where you’re a part of a team. So it’s that nice combination of something that’s individual but also contributing to a team.”

Both Backhouse and MacLeod noted the impact of staying healthy — not running, specifically, but any cardiovascular activity has greatly impacted their writing performance.

“To be a writer, there is a lot of self-discipline involved, and [it’s] the same thing with training as probably any sport,” Backhouse said. “Maybe running because it’s ultimately something that you’re doing by yourself.”

“I know lots of runners who don’t write, and I know lots of writers who don’t run and have a hard time making it around the block, so it’s not a 100 per cent thing,” MacLeod says. “But, certainly I know from my experience when I’m feeling healthy, rested, and in shape that I do find that writing is easier as well.”

So, in the end, my great Martlet article about the link between running and writing had failed. However, funnily enough, during both interviews MacLeod and Backhouse admitted to a new hobby they spend a lot of their time doing: cycling.

Could it be? A flicker of light at the end of the tunnel to revive my Martlet investigation story, but switched to cycling instead of running?

Here’s a call out for all cycling journalists: please contact me with your story behind riding and writing. Maybe this could be the next “cookies and cream” duo.