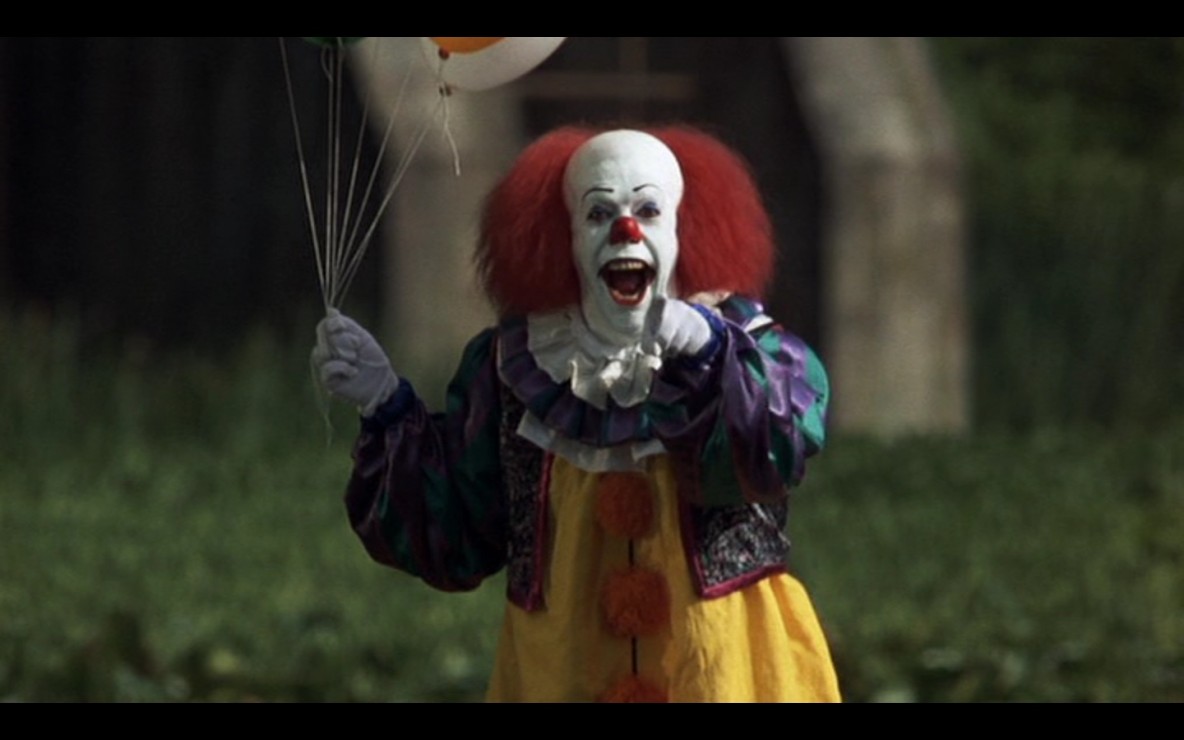 People dressed as threatening clowns are popping up across North America, including the Greater Victoria Area. This is an unrelated photo of actor Tim Curry in the television adaptation of It. Via Warner Bros. Television

Over the past few weeks, threatening individuals wearing clown masks and costumes have been spotted in forests, backyards, and in parking lots across North America. While only two injuries have occurred in Sweden and in the southern states, the threat has recently turned local.

Last week, a Victoria woman reported spotting a creepy clown on her surveillance camera footage outside of a Dairy Queen in Colwood. In the video, posted on the Victoria Buzz Facebook page, the clown stands in a dark parking lot, looks directly at the camera, tilts their head, then walks out of the frame.

According to an article in The Guardian, the clown phenomenon appears to have started with a single incident in South Carolina where two clowns attempted to lure a young boy into their house.

Safer Schools Together (SST), a White Rock-based company devoted to minimizing the risk of student violence, released a safety bulletin on Oct. 6 stating that the majority of threats had appeared through Instagram and Snapchat accounts.

Early this month, the CBC reported that two Prince George high school students were arrested in connection with an Instagram account called “princegeorgeclowns” and the posting of a picture of gun-wielding cartoon clowns with the caption: “Every school in PG about to get hit.” No one was harmed, but schools within the district were put on lockdown.

Due to this incident and other minor threats, schools across B.C. have issued newsletters warning parents and students that involvement with this craze could warrant serious consequences.

“We have been dealing with multiple incidents in B.C. and throughout North America relating to ‘Clown’ threats,” said SST’s safety bulletin. “These threats are typically referencing kidnapping or targeting schools with threats of violence.”

A message sent out to parents from Journey Middle School in Sooke stated, “It is also important to make students aware that if they engage in, or participate in any way, in this type of threat-related behaviour, they will experience discipline and/or criminal charges.”

The fear of clowns isn’t uncommon: Coulrophobia is shared by around 12 per cent of the U.S. population. A 2013 article published in the Smithsonian Magazine outlines the history of psychological fears of clowns, and states that it is rarely recognized as a phobia due to limited exposure to them, but that it often begins in childhood. As cultural critic Mark Dery writes in his 1999 book The Pyrotechnic Insanitarium: America on the Brink, the makeup can trigger a psychological distrust to the clown because we know that a person isn’t happy all the time, and could be hiding something — “the clown persona protests too much.”

Rob Duncan, also known as Changes the Clown, a member of Clowns Against Child Poverty, has previously taken on the costume as a promotional tool to bring awareness to political issues when he ran for mayor of Victoria in 2014. Now, he worries the recent craze has wounded the fun-loving intentions of working clowns.

“Recent events have, of course, been damaging to the clown image, but the status of the image has been in decline for a long time,” said Duncan in an email interview.

Duncan suggests that the viral nature of the phenomenon feeds into itself by way of social media.

“The frequency and also the severity of these creepy-clown events is greatly increased by reinforcing attention, but unfortunately so much of the attention has been occurring on social media, rather than in the mainstream media, that suppressing it effectively seems inconceivable,” said Duncan. In fact, the Clowns Against Child Poverty may postpone using the costumes for fear they’ll be seen in a negative light.

“Monday, Oct. 17 is International Day for the Eradication of Poverty, obviously an important day for the campaign, with a rally in the afternoon at the legislature,” Duncan wrote, “but it’s looking like we may end up just leaving the clowns out of it altogether this year.”