Crimes of the Heart exceptional exercise in character, writing 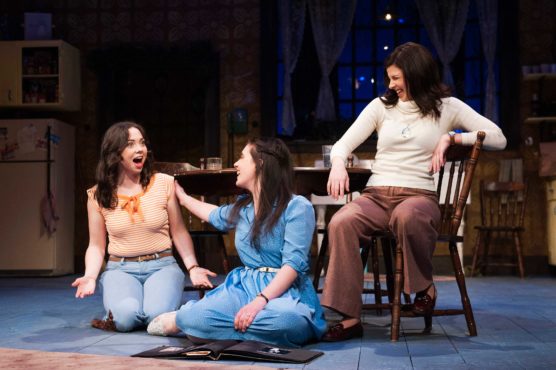 Meg, Babe and and Lenny Magrath laugh at old photos. Photo by David Lowes via the Phoenix

Crimes of the Heart is the Pulitzer Prize–winning play by acclaimed playwright Beth Henley, which was later adapted into an Oscar-nominated film of the same name. Set in the 1970s in Hazlehurst, Miss., the story follows the three Magrath sisters, reunited after the youngest is arrested and released on bail after shooting her husband. Simultaneously dealing with mental illness, violence against women, and familial love, Crimes is a particularly timely production in a post-#MeToo world.

As a school production, it’s expected that any scripts performed at the Phoenix Theatre will push and develop budding talent, and Crimes rises to and exceeds that challenge. Paraphrasing director Peter McGuire from his pre-show lecture, the theatre department tries to select work that will foster the current batch of talent in the program, and the script for Crimes is especially generous to its cast of actors. Crimes introduces characters in difficult circumstances, asks difficult questions, and presents difficult decisions, which makes it extremely compelling to watch.

The show is performed on a thrust stage, which means that the stage delves out into the audience and that the actors could be viewed from almost every angle. But Crimes was clearly written to face the audience head-on rather than in their midst, and some of the blocking was unusually awkward, as if no one had any idea what to do with five square feet sitting empty in the middle of the room. Should they move a chair there? Maybe they should move it several times? What if they stand at the edge of the stage and look longingly at a wall? Is there meant to be a window or not?

I could watch Van Den Bossche pick at white bread until the end of time, if only because she throws every atom of herself into the character.

Despite a few blocking hiccups, the kitchen set and ’70s costume design are exceptional in the way that plain chocolate cake can be utterly divine without ganache or cherries or ice cream: sometimes simple is tasteful. It’s a testament to the design team that they are able to showcase and develop the characters without relying solely on the nostalgia aesthetics of the era. (Don’t worry, bell-bottoms do make an appearance and we’re all better off for it.)

The characters themselves are wholly developed people brought to life by the excellent cast of actors: Sophie Chappell brings the tender conflict of struggling with personal happiness and familial responsibility to the role of Lenny, the eldest sister, while Sara Jean Valiquette dominates the stage as Meg, the impulsive, reckless, and deeply loving middle child. Lucy Sharples brought laughter and tears in her role as Babe, the youngest sister, and her work in the play’s most impactful scene (which involves a suicide attempt) is unnerving, upsetting, and exceptionally humourous.

The women of the play are supported by two excellent men: Doc Porter, portrayed by Sheldon Graham, and Barnette Lloyd, played by Duncan Alexander, who both bring a comforting stability to underscore the erratic and impulsive behaviours of the Magrath sisters. Their presences act as grounding rods, yet they also brought the feeling that these characters exist and live beyond the boundaries of the Magrath home.

The true standout performance belongs to Mary Van Den Bossche, who captivates as the aggressively charismatic cousin Chick. From the moment she steps onto the stage, audience eyes are immediately drawn to her magnetic character. Her mannerisms, from eating slices of bread to the sharp jutting of her hips, are compelling to watch when combined with Chick’s blunt and overbearing demeanor. I could watch Van Den Bossche pick at white bread until the end of time, if only because she throws every atom of herself into the character.

Crimes has a regrettably short run, but the impressions it leaves are thought provoking and long lasting. This exceptional exercise in character and acting is well worth your time.

The Phoenix Theatre’s Crimes of the Heart runs from February 13 to 24, 2018. There are 8pm shows Monday through Saturday and a 2pm matinee on Saturdays. Adult and senior tickets are $26 and $20 respectively, though alumni can purchase $15 tickets at matinee shows. Student tickets are $15 every night.