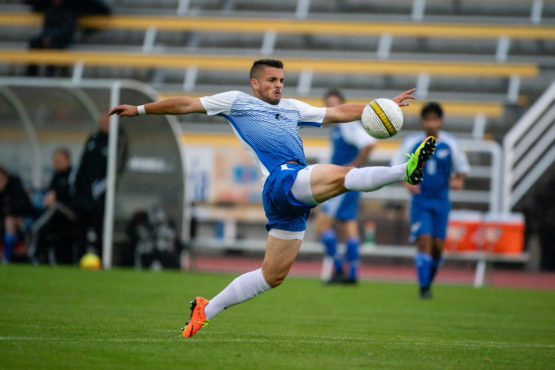 The Vikes Men’s soccer team narrowly missed a Canada West playoff berth on Sunday, Oct. 20, with a 1-4 loss to the Thompson Rivers WolfPack. The match at the Kamloops Hillside Stadium was a must-win for the embattled Vikes, who would also need a victory against UBCO Heat the following day to advance.

The WolfPack, also fighting for a playoff spot, opened the scoring with a well-placed corner kick launched by Canada West Player of the Year Mitchell Popadynetz and headed home by Thomas Lantmeeters. It took only ten minutes for the Vikes to strike back with a blast from defenseman Mackenzie Rigg to secure a 1-1 tie by halftime. From there, fatigue and disorganization plagued the Vikes’ defence and they were unable to respond to a three-goal flurry during the final 55 minutes of play.

“We had a chance,” said Vikes head coach Bruce Wilson, “but in the second half our player marking just wasn’t there.”

Two of the WolfPack’s goals came from corner kicks, a statistic all-too reminiscent of last week’s match against the Trinity West Spartans. After carrying a 1-0 lead over the Spartans into halftime during that game, the Vikes allowed two second-half corner kick goals for an eventual 1-2 loss. Coach Wilson pointed to this trend of “first-year mistakes” as his team’s achilles heel for the first half of the season.

On Monday, the Vikes shook off the sting of dashed playoff hopes to finish their regular season with a 2-0 victory over UBCO Heat. Their gritty, two-way performance was punctuated by the scoring efforts of senior Vikes player Mackenzie Rigg and rookie phenom Matteo Ventura. The victory, though bittersweet, was another example of the resilience this team has shown through a trying campaign.

Undaunted by early expectations, the team demonstrated astounding resilience in the latter part of their campaign to finish with a record of 5-8-3.

The weekend concludes a season that has been rife with adversity for the Vikes Men’s soccer team. The bad news came early with a pre-season knee injury to striker Isaac Koch. The loss of Koch, a member of last year’s Canada West All-Star team, was a crippling blow to the Vikes’ roster and undoubtedly contributed to their rocky opening weekend. They dropped 15 goals in their first four games of the season, an uncharacteristic stat for a team with a typically strong defensive record.

It would have been easy to dismiss the Vikes as contenders in Canada West’s Pacific Division after such a dismal start, but Coach Wilson remained focused on continuing to develop the outstanding potential of his squad. Central to that potential is 18-year-old forward Matteo Ventura, who found his stride after failing to score in the first two games of his university career. Ventura’s development was fostered by the stolid presence of second-year fellow forward Ian Whibley. Experience was instrumental in their backfield as well, with midfielder Xavier Araujo and defenders Nico Cristante and Mackenzie Rigg bringing a combined twelve years of collegiate experience to the pitch. 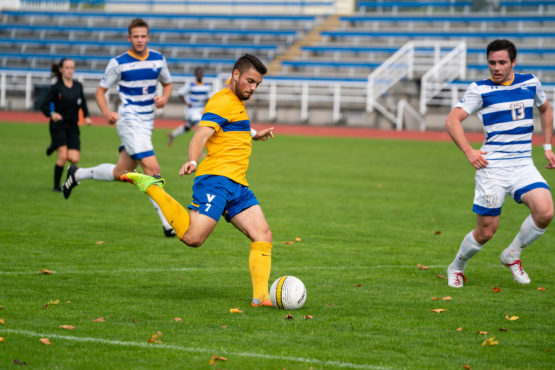 Undaunted by early expectations, the team demonstrated astounding resilience in the latter part of their campaign to finish with a record of 5-8-3. While unexceptional, the season contained flashes of brilliance that keep Coach Wilson optimistic about the future.

With the Canadian intercollegiate season drawing to a close, the Vikes will take this time to train hard until winter break and then resume full force in January. For Coach Wilson, this period of time is an opportunity to build on the gains made by his young team. This is his 31st year at the helm of the program, giving him the perspective to see what the team’s emerging stars can achieve with time and patience.

“Matteo [Ventura] has performed as we expected, he has incredible natural ability,” said Wilson. “What Matteo needs is experience at the university level. We play two games every weekend [in Canada West]. I’ve spoken to him about fitness already and it’s something he’s working on.”

With the Canadian intercollegiate season drawing to a close, the Vikes will take this time to train hard until winter break and then resume full force in January.

Coach Wilson also pointed out goalkeeper Harjot Nijjar as a young talent to watch. Nijjar, another fresh-faced 18-year-old, was an understudy to fourth-year keeper Jas Lally this season. As such, he can expect to take the role of starting keeper in the near future. His consistent performance in four games played this season leaves little doubt that he will be up to the task. He stopped five shots in the team’s final match for his first career shutout and third win.

The team looks forward to the return of Isaac Koch, who will soon undergo surgery and begin rehabilitation. Coach Wilson indicated that we can hope for his return to the lineup for the 2019-20 Canada West season. Koch and his fellow seniors will undoubtedly look to conclude their university careers with the same excellence that carried them to finals three years ago.

For now, a national title remains a distant goal for the Vikes. But with a healthy lineup, a deep pool of young talent, and the tutelage of a legendary coach, their best is yet to come.